Vampires have been used to tell all kinds of different stories and recontextualised in many different ways. They can be heroes or villains, pure evil or misunderstood victims, filthy vermin or upper-class parasites, disgusting monsters or romantic heartthrobs; in the right context, they can even be funny. Their ubiquitous place in pop culture make them an easy shorthand for making social commentary, and the vampire is most often used as an allegory for class in some fashion. However, when class is in discussion, gender usually isn’t far behind, but oddly there aren’t many feminist vampire movies (the only other one that comes to mind is A Girl Walks Home Alone at Night, and that film is about so much more). With such a ripe gap in the market to fill, Bit couldn’t have been made at a more perfect time and, whilst it has noticeable flaws, it is regardless a unique genre movie that deserves to become a cult classic. 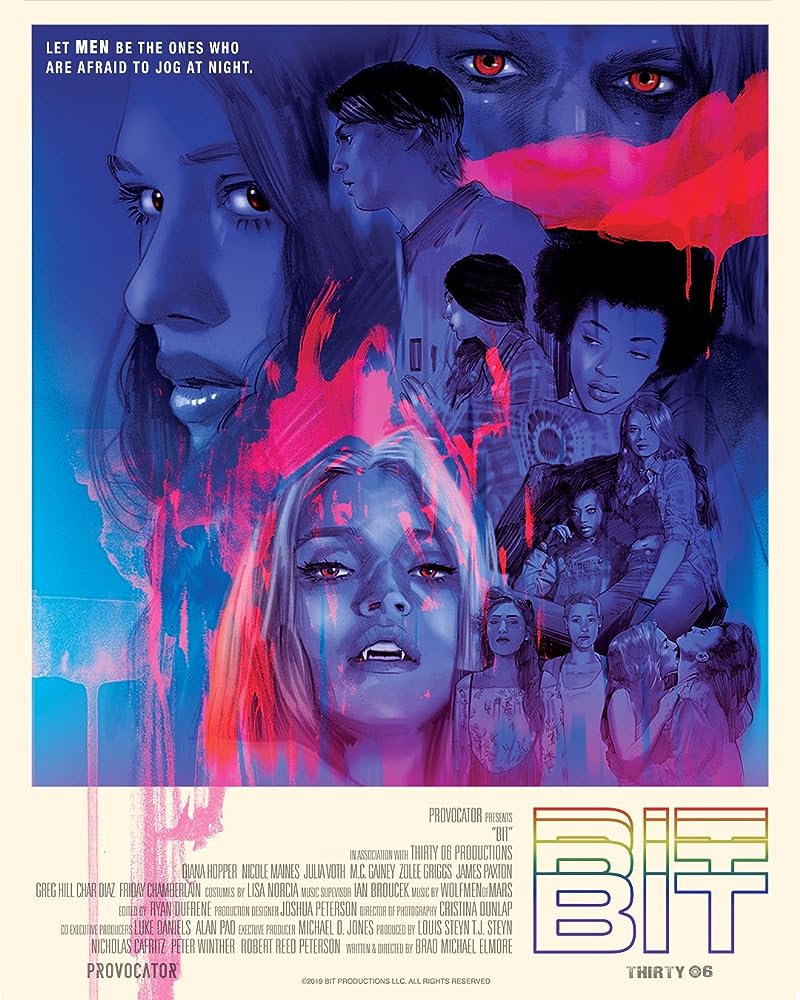 Though its subject matter may be very 2020, Bit on a tone and aesthetic level casts its mind back to the 80s and 90s. Its story may bring to mind more mainstream teen horror fare like The Lost Boys or The Craft, but in all other aspects it more closely resembles the neon-drenched, Los Angeles-set B movies of the era. It follows the tried-and-true formula of the young adult thrust into the underground supernatural world and coming to terms with their place in it, but Bit separates itself by taking what is usually subtext and making it the text. It is emphatically a film about women repurposing patriarchal power structures and turning them against their oppressors, turning discussions on how class relates to gender into palatable cinema. Whilst it would be easy for Bit to then just indulge in its female empowerment fantasy, it goes above and beyond that shallow reading and critiques its own premise. It questions the line-in-the-sand dichotomy between men and women, the ethics of a ‘taste of their own medicine’ worldview, and highlights that women aren’t exempt from succumbing to and abusing power even if they have good intentions. The final result is essentially an intersectional feminist version of a classic Alex Cox or Larry Cohen picture, mixing high brow and low brow cinematic tastes to create something that has a nostalgic feel but a contemporary mind.

However, the film’s lofty ambitions and thematic success is somewhat hampered by its filmmaking missteps. The screenplay is structurally frontloaded, spending two-thirds of its story setting up everything and then burning through the rest of the narrative in what time it has left. It’s akin to watching a perfect pilot episode to a TV show, but then only experiencing the rest of the first season through CliffsNotes. Whilst most great B movies know their limitations and circumnavigate their time and budget limitations through creative means, Bit ultimately tries to bite off a little more than it can chew. The few action sequences don’t take enough advantage of their premise and are over far too easily, and though billed as a horror film there aren’t any genuine scares (unless you’re haemophobic, because there is a lot of bloodletting). The film ultimately works best as a social commentary with comedic undertones, and the action and horror ultimately feel like obligatory window dressing to justify its genre trappings. If the filmmakers could have found a clever way to weave the deconstructionism into its elements of spectacle, it might have made them easier to swallow even on a tight budget.

When crafting a genre ensemble piece, casting and characterisation are absolutely key, and Bit knocks it out of the park in regards to its two leads. Nicole Maines makes for a fantastic protagonist as the cynical and conflicted Laurel. She’s innocent and diffident enough about her place in the world to be sympathetic, but she has a self-aware dry wit, a wisdom beyond her years and a confidence in herself that equally make her aspirational. On top of Maines’ great performance, the screenplay does a fantastic job of subtly weaving Laurel’s trans identity into the character’s backstory and dialogue. Though it certainly plays a role, her gender is never overtly called attention to or made into a big issue, which naturally compliments the film’s intersectional message. It is honestly up there with Sam Levinson’s recent work as one of the best examples of transgender representation in film & television not directly about the trans experience (speaking personally for a sec, it feels a bit wrong that the two filmmakers who’ve gotten this right are a pair of cishetero dudes, but that’s the weird nonsensical world we live in I guess).

Perfectly contrasting the reluctant Laurel is Diana Hopper as the assertive and empowered Duke. She is a presence from the moment she walks on screen and steals every scene she gets her hands on. Hopper just has this natural charisma and authority that you absolutely buy that these women would follow her, and her dialogue is just layered with harsh truths and witty observations that tear into patriarchal culture. On top of that, the sequence detailing Duke’s backstory is easily the best part of the movie and features one hell of an inspired needle drop. It’s a moment that could have easily pushed the film into What We Do in the Shadows territory, but it pulls itself back just enough to avoid going into parody. With that said, the film does such a great job with defining Laurel and Duke that unfortunately, because of the film’s constrained length, the other characters get nowhere near enough attention. James Paxton ends up being a bit one-note as Laurel’s frustrated older brother Mark, but he makes up for it towards the end in a fantastic dramatic scene with Maines where he unloads his insecurities. The other vampires in Duke’s gang equally feel side-lined and defined purely by their admittedly unique aesthetics; Zolee Griggs’ Izzy admittedly gets a little more to do at first, but once the film jumps into fast-forward for the third act she falls into the background. The shining star in the film’s mostly generic secondary cast is Greg Hill as the master vampire Vlad, whose distinctive face and voice perfectly embodies that classic horror movie image, though again his screen time is tragically brief.

Bit is hampered in several ways by its truncated length and tepid spectacle, but what it achieves despite its limitations is remarkable. As a feminist vampire film, it leans far more on the former rather than the latter, which may turn off audiences looking for a more conventional horror flick. However, for film lovers starved for genre entertainment that breaks boundaries and says something relevant to the times, this is absolutely one worth seeking out and supporting. Speaking candidly for a moment again, this movie honestly feels like it was made just for me, but I can think of so many other audiences who would get a kick out of it. This deserves to become an underground classic in the vein of Repo Man, Night of the Comet or Big Trouble in Little China, but especially within queer and feminist circles. The story’s ending certainly makes itself clear that it would like to continue, so a direct sequel or even a TV series continuation would certainly be a great option. Hey, remember: Buffy the Vampire Slayer began its life as a low-budget cult horror flick before being reinvented as the worldwide TV phenomenon. Who’s to say Bit couldn’t and shouldn’t get the same treatment?