Pixar is entering something of a new era. The remnants of the Lasseter years are finally behind them, their extended run of sequels has been aptly capped by Toy Story 4, and now they enter a new decade refocusing on original concepts with all kinds of fantastic possibilities awaiting. Onward is an apt first step forward into this uncharted territory given its titular themes of moving forward and, whilst certainly far from the studio’s finest hour, is undeniably a Pixar movie with all of the energy, imagination and heart you’d expect. 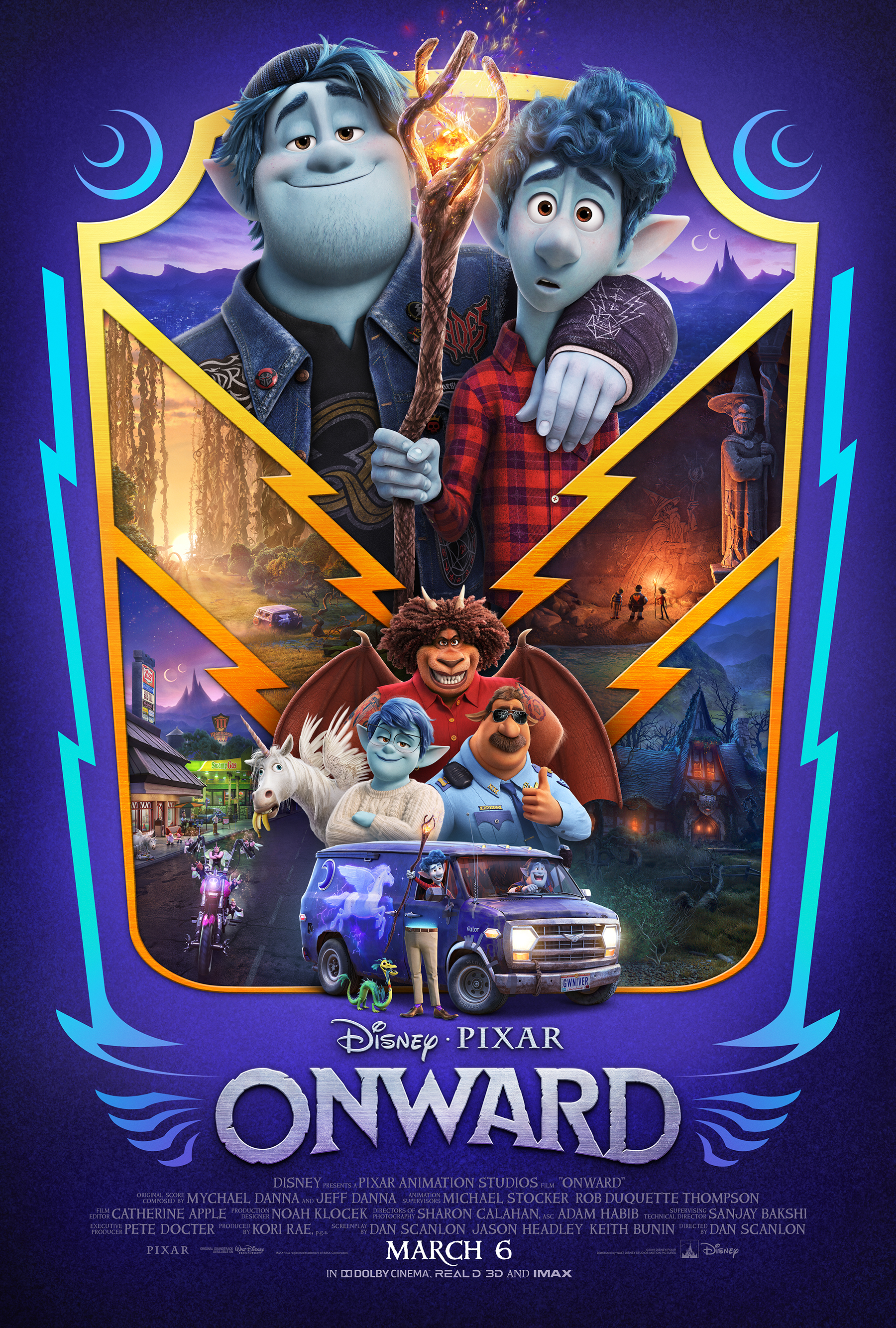 Like all great Pixar films, Onward uses its fantastical backdrop to tell a relatably human story; in this instance, a tale of brotherhood and reconciling your past with your present and future. Though certainly not a totally original backbone, it has a distinctive perspective on the subject and uses its fantasy setting ably to juxtapose the structure of a mythic quest to the family drama of two brothers who miss their father. Whilst it perhaps doesn’t take advantage of its world as much as one might hope, relying heavily on shorthand familiarity with genre tropes, there’s just enough fun details to make it feel distinctive. It’s tonally a lot more light-hearted than most Pixar films, moving at a brisk pace and throwing out gags thick and fast, to the point it more resembles a DreamWorks production at times. However, it brings back the magic by its third act and packs emotional heft where it counts, using its fantastical world to emphasize its emotional centre rather than distract from it. It’s the rare family film where the message is mature, nuanced and aimed mostly at teenagers in the audience. It’s a welcome change of pace that avoids the usual platitudes, but younger and older viewers should be able to appreciate its sentiments too.

Much of Onward’s emotional heft lies at the feet of Tom Holland as socially awkward teen elf Ian and he knocks it out of the park. He is an instantly relatable and sympathetic character, taking the basic “shy nerdy kid” template and giving it a modern twist, and Holland’s immediately endearing voice is a perfect match. Fairing a little less well is Chris Pratt doing his best Jack Black impression as Ian’s manchild older brother Barley. Pratt performs ably in the role, but even for a character who is initially supposed to be obnoxious, he flies a little too close to the sun. Additionally, whilst Barley’s character arc is sweet and compliments Ian’s development well, the details of it are near-identical to Pratt’s Star-Lord in Guardians of the Galaxy; honestly, it’s so close I wonder if it wasn’t a coincidence at all. Julia-Louise Dreyfus and Octavia Spencer are also fantastic as Ian & Barley’s mother and a manticore respectively, though neither gets as much screen time as they deserve. Spencer especially feels a little hard done by, as though her abrupt identity crisis is hilariously delivered it hits its peak too early and she’s somewhat left to coast for the rest of the film. Honestly, a film just about her and Dreyfus might have been just as entertaining if not more so. Mel Rodriguez is a welcome surprise as Dreyfus’ boyfriend Bronco, whilst Ali Wong and Lena Waithe are a bit of a waste as a pair of cops who only appear in one amusing but brief comedic interlude (and yet again Disney’s token offhand approach to LGBTQ+ representation).

Though on a story level the world of Onward is a little patchy, the visual storytelling going on in its production design fills in the gaps ably. It is distinctively a fantasy world brought to the modern day rather than just our world but with fantasy characters carelessly inserted (*cough*Bright*cough*), which not only avoids world-building problems but frees it up to be far more imaginative. It’s an endearing and colourful art style with just enough shades of darkness to avoid being too cutesy, and little details like the patches on Barley’s denim jacket or the nail polish on The Manticore’s claws are nice humanising touches.

Onward is a solid return to original storytelling for Pixar, though it ultimately plays it a little too safe to be anything other than pretty damn good. Much like director Dan Scanlon’s previous effort Monsters University, it’s a well-constructed and endearing bit of family entertainment that abruptly gets real as it veers into the third act to yank on your heartstrings. It makes for an experience than ends on a high note but feels lacking similar heights throughout. The Pixar name is usually enough of a seal of approval in-and-of-itself, and Onward is certainly honourable enough to earn its place amongst their catalogue. Hopefully, this is just the start of a bright new future for the studio, and we don’t even have to wait that long for their next effort.

One thought on “ONWARD – an Alternative Lens review”