Like many kids who grew up in the 90s, I was a big fan of Mighty Morphin Power Rangers and kept up with the show for many years after that era (I think the last iteration I actively watched was Wild Force). I watched the show and the movies constantly, I owned a whole bunch of the action figures, and I even had a Green Ranger costume that I’d run around the house in and make swooshing noises as I practiced my karate moves. Like Transformers and Teenage Mutant Ninja Turtles before it or Pokémon and Yu-Gi-Oh! since, Power Rangers is one of those properties that never went away but is still very much associated with the era it was birthed in, making it one of those treasured “nostalgia properties” Hollywood loves to mine these days. Speaking of which, the new Power Rangers movie. Is this yet another example of a classic IP being misused for the sake of nostalgia dollars, or is this a reboot made with some actual heart? Short answer: yes, but with certain provisos. 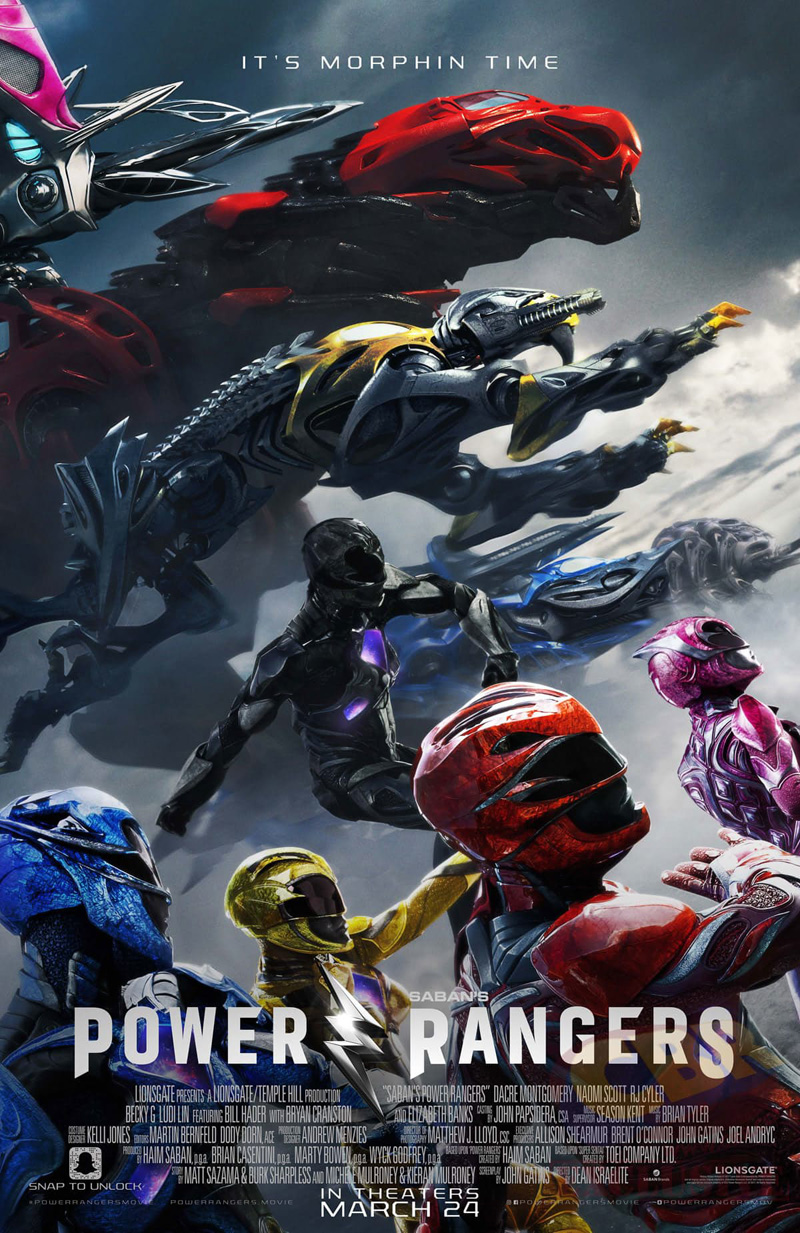 The basic set-up of this new Power Rangers is pretty close to how it was back in the Mighty Morphin days, but with some updates and inspiration drawn from other areas of the franchise. It takes more of a traditional superhero origin approach to the story, with the focus being on the Rangers learning to gain their powers instead of being suddenly handed them, but even with these changes it is unmistakably a Power Rangers movie. It tonally takes a more grounded approach but it doesn’t feel completely ashamed of its campy, toyetic inspiration; it is based of a show that was essentially Saved by the Bell mixed with Gamera, after all. It takes a few knowing jabs at the premise and doesn’t take itself too seriously, and whilst some of the humour sometimes falls into the sophomoric it never reaches a level that makes you feel intellectually insulted.

For those looking for an all-out action romp, you might be disappointed as all of the traditional Ranger action is contained within the third act, but surprisingly it doesn’t drag the movie down. The character drama between these teenagers learning to become a team and get over their issues does actually manage to hold the film together, and so once the action does arrive the build-up feels worth it and it delivers a worthy update of classic Power Rangers action. I wish there was a little more time spent with the Rangers in their prime, especially given that there’s only one major on-foot fight scene with them in-costume, but the film more than promises sequels and if they arrive then I think they’ve laid solid groundwork for more to come. [on a side note, though it isn’t a comic book movie, there is a mid-credits scene that fans should probably stick around for]

Let’s be real for a moment: the original cast of Mighty Morphin Power Rangers weren’t exactly the best written or acted. They were twenty-somethings pretending to be high school kids with the broadest 90s TV one-dimensional personalities you could think of, and that would not fly today. But the new Power Rangers has a surprising diametric difference here: the characters are actually the best thing about the movie. Sure, this new team is essentially the cast of The Breakfast Club as reimagined by The CW, but they feel fully realised and relatable to a modern audience in a way the originals weren’t even in their era.

Instead of the extreme goody-two-shoes nature of the originals that made them feel like the cast of a drug PSA, these Rangers are troubled, reluctant and often at odds with each other; they are teenagers with attitude, but not necessarily good-natured ones. Dacre Montgomery gives Jason a personality that overcomes the usual banality of the “leader” role, admitting quickly to his faults and taking command when others won’t. Naomi Scott’s Kimberly takes the original valley girl characterisation of the character and turns it on its head, showing regret for her Mean Girls-esque actions and ultimately wanting to make up for them. Ludi Lin’s Zack may not be as iconic a rebel as his John Bender inspiration but he makes for a lovable rapscallion, and though Becky G’s Trini drifts the furthest from the source that’s a good thing. Her new characterization as an anti-social, identity-questioning teen adds some much needed depth in an area that very few films aimed at kids dare touch.

But the real star here is RJ Cyler as Billy, who is far more than the stereotypical nerd character he was before. He is the real heart of the team and steals every scene he’s in with his passion and scatter-brained attempts at humour, and making him autistic not only gives context to his technobabble ramblings but also creates a much-needed hero for kids on the spectrum. But like the heroes themselves, what ultimately makes these characters work is how they interact. All of the cast feel like they have genuine chemistry with each other, learning to get along and help each other through their personal angst, and by the film’s climax you really feel like these kids have earned their heroic status.

The supporting cast isn’t quite as strong as our stars, but they all do a more-than-satisfactory job. Bryan Cranston’s Zordon is a little bit more than just the generic mentor he was on the show, showing frustration with the Rangers and not always encouraging them in the right way. As much as the film is about the Rangers learning to become a team, it’s also about Zordon coming to accept that these are the heroes of today. Bill Hader does a good job of removing Alpha 5’s more cloying personality traits, but in the process it doesn’t leave him with much to work with; he has a few funny lines here and there, but I felt like he could have been a little more sassy or excitable. Elizabeth Banks easily edges closest to traditional Power Rangers acting as the new Rita Repulsa, constantly cackling and waving her hands around, and though sometimes it can be tonally at odds with the rest of the film it remains entertaining. It’s easy enough to chalk up her eccentric behaviour to the fact she’s gone insane and just enjoy watching a respectable actor ham it up as a supervillain. My only real gripes with the cast are the ones who aren’t really there: Goldar has been reduced from Rita’s second-in-command to a generic monster, and though the film has plenty of opportunities to do so there is absolutely no Bulk & Skull anywhere to be found. Oh well, I guess that’s just another thing for them to add in the sequel.

On a technical level, the film doesn’t do a huge amount to impress but it’s still a massive step-up from even the most recent episodes of the show. The visual effects aren’t as detailed or photorealistic as the recent Transformers movies or Pacific Rim, but the more exaggerated and colourful designs make up for it. The Ranger suits themselves are a little flashy and odd at first, but in motion the designs feel more practical and visually interesting than the spandex of the past; again, close enough to the original whilst still feeling fresh. Brian Tyler’s score feels suitably epic, several times reminding me of Daft Punk’s score for TRON: Legacy with its mix of classical and techno, but the use of pop music is a little less consistent. Whilst the occasional soundtrack choice works, especially when they find a place to play that classic theme song, a lot of them feel forced in to appeal to a teen audience. However, the film’s biggest fault is one I rarely ever bring up but here it needs addressing: product placement. There’s only one big company on display, but it’s so key to the movie that it’s actually a plot point. I can’t believe talking about a film’s product placement actually counts as a spoiler, but just don’t be surprised if you have a craving for doughnuts after watching this movie.

Here’s the real big question as to whether you’ll like this movie or not: do you or did you ever like Power Rangers as a kid? If you never did, this movie probably won’t appeal to you. If you maybe did but have written it off since, I’d still probably not recommend it. But if there is any part of you that still holds a candle for this goofy series or, better yet, you are still actively a fan, then this is a movie you are at least going to like, if not love. Does it always work? No. Is it goofy and weird and over the top? Yes. But is it entertaining? Absolutely! This is by no means a spectacular movie that’ll go down in the history books, but it accomplishes its goal admirably and was just a lot of fun to watch.

Though sometimes held back by those typical Hollywood changes, it feels like it was made with effort from people who at least understood the show if not necessarily being fans of it. Beyond just doing a solid job of updating the source material, the film actually pays attention to things like character development and thematic meaning, which immediately puts it above and beyond most movies of its ilk; take notes, Michael Bay. I was willing to settle for something much stupider in the vein of GI Joe: Retaliation or Teenage Mutant Ninja Turtles: Out of the Shadows, but Power Rangers worked so well for me that I was able to actually enjoy it unironically. If you’re a “serious” person, go ahead and knock a few points of the score below. But if you’ve come to Power Rangers just to enjoy yourself, I believe you’ll have a morphenomenal good time.

One thought on “POWER RANGERS – a review by JJ Heaton”