Writers: Stephen Chbosky (The Perks of Being a Wallflower) and Evan Spiliotopoulos (The Huntsman: Winter’s War)

Disney continues to mine its animation catalogue for live-action adaptations, and at the moment their success has been mixed to say the least; for every The Jungle Book, there’s a Maleficent. But Beauty and the Beast is not only the most recent of their classics they’ve attempted to remake but also one of the most difficult because, at least in my opinion, it’s the best animated movie they’ve ever made. How on earth can you top a film that is already so damn near perfect? Thankfully, whilst it still doesn’t reach the lofty heights of the original, this new Beauty and the Beast is a worthy adaptation that updates the classic just enough to be fresh whilst being smart enough to preserve what is already superb. 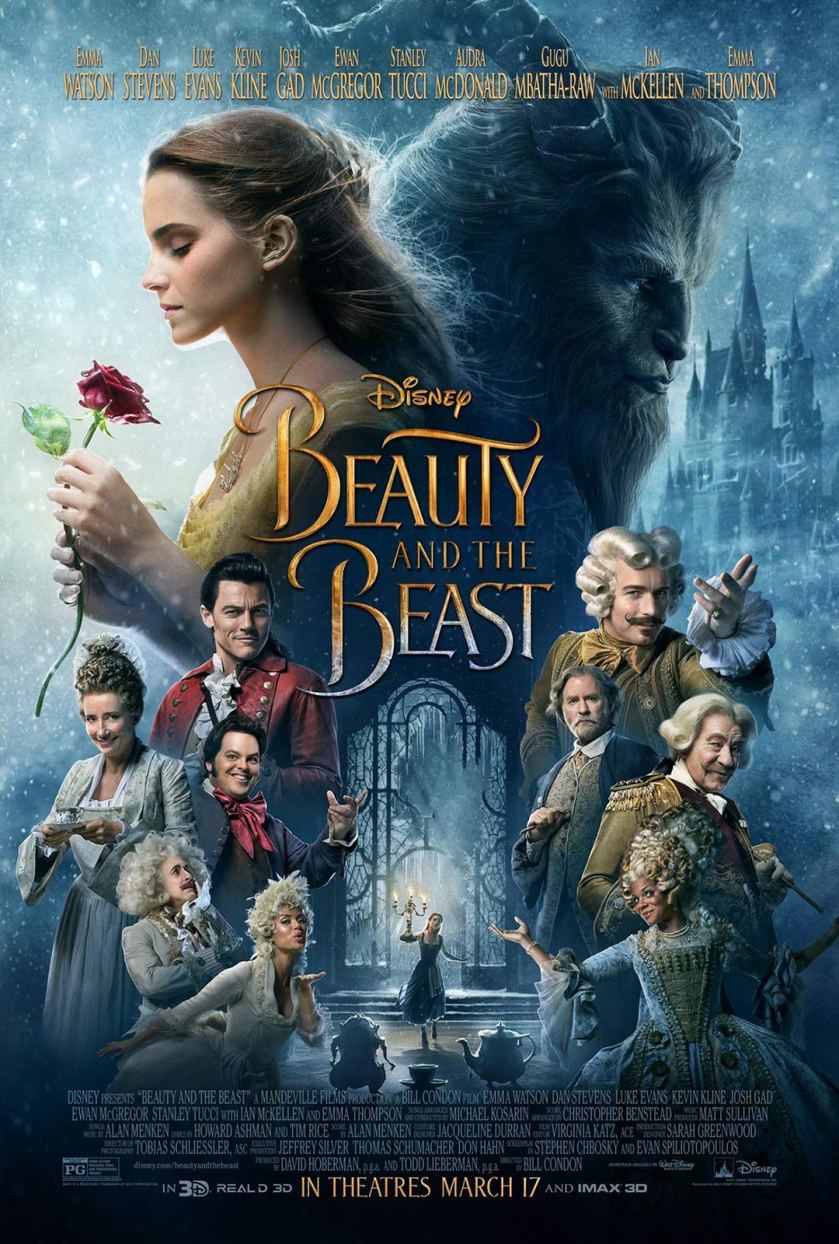 If you know the 1991 original back to front, the basic plot is exactly as you remember it. This is easily the most literal translation of one of their films Disney has done with no subversions on the story or drastic tonal reinvention, with even much of the original dialogue making it through intact, but honestly there’s no reason why they should change it. Given that they’ve also kept it as a musical, the light tone and exaggerated aspects drawn right from the animation doesn’t at all feel out of place in live-action. Instead of drastically reworking the story, the film opts to simply touch up the material already there, like adding new character beats or fixing up plot holes from the original. For the most part the changes work, but equally the movie wouldn’t be much better or worse without them. Expanding on the effects on the curse on its inhabitants or delving into the fate of Belle’s mother do add some interesting detail and dramatic heft, but the original worked just as well without them. However, the subtle fixes they’ve done here and there, like explaining why no one in town knows about the castle or the inconsistencies regarding The Beast’s age and how long he’s been cursed, should be much appreciated by fans of the classic who’ve noticed these things over the years. As a whole, the film goes for the “if it ain’t broke, don’t fix it” approach and, though some may see the final product as too similar to the original to warrant existence, it succeeds in recognizing what needed a polish and what can stay exactly as is.

The real change in this Beauty and the Beast comes not from the format translation or story expansion, but from the new life these actors bring to their iconic roles. At their core, they are still the same timeless characters you know and love but they now feel subtly but noticeably different to reflect the new era it has been made in. Belle has always been one of Disney’s most forward and dimensional leads and doesn’t need a major revamping like, say, Cinderella did, but Emma Watson gives her a modern feminist touch-up that makes her feel fresh again. They’ve really expanded on the trailblazing nature of the character, giving her an eye for invention and a contemporary attitude to relationships that feel like a natural extension of her traits from the original. Dan Stevens’ interpretation of The Beast also feels suitably updated, using the character’s spoilt superficial upbringing as more of a justification for his initially volatile behaviour and gives an extra dimension to his character’s arc; as much as Belle learns to look past Beast’s monstrous form to see the man inside, he learns to look past her beauty to see the smart and capable woman she is.

Concerning side characters, Luke Evans and Josh Gad constantly steal the show as Gaston and LeFou. This is easily the most impressed I’ve been with a performance from Evans ever, who channels his inner Bruce Campbell to give a marvellously egotistical performance that can switch from funny to threatening in a heartbeat. Gad’s LeFou, meanwhile, has been greatly expanded from a mere comic foil to an awestruck follower too blinded to realise he’s idolising the wrong man. [To briefly address the “controversy” surrounding the character (which I shouldn’t really have to because it’s 2017, but this is still newsworthy apparently), it’s played fairly low-key and doesn’t warrant the entire hubbub it’s caused. Honestly, it’s only a step or two more overt than the subtext in the Batman/Joker relationship in The LEGO Batman Movie. It’s certainly there, but it’s the kind of a thing a younger audience will probably not even notice.] Kevin Kline is fun as Belle’s doting father Maurice, his kookiness brought down a notch and played more as loving if somewhat eccentric. The various servants at Beast’s castle are all played with aplomb by an all-star cast, though some feel a little more inconsequential than others. Ewan McGregor and Ian McKellen may not hold a candle on the timeless camaraderie (yes, both puns intended) of Jerry Orbach and David Ogden Stiers’ portrayals of Lumiere and Cogsworth, but they more than apply themselves to the roles and prove to be entertaining in their own way. Similarly, Emma Thompson’s Mrs Potts doesn’t quite match up to Angela Lansbury’s interpretation, but she brings her own personal charm to the character that feels as suitably caring and sweet. However, the relationship between Lumiere and Gugu Mbatha-Raw’s Plumette and the new romance between Audra McDonald’s Garderobe and Stanley Tucci’s Cadenza both feel rather superfluous; I’d like to have seen the latter dropped and the former given more development.

Of course, you can’t talk about either version of Beauty and the Beast without talking about the wonderful music by Alan Menken and the late Howard Ashman. All the songs from the original have made the jump to live action and, whilst the original recordings shall always remain the iconic versions of these songs, the new renditions are still all-around staged and performed wonderfully; “Belle” and “Gaston” feel the most reinvigorated in their new forms, with Watson and Gad’s performances giving some new subtext to the familiar lyrics. The new songs from Aladdin lyricist Tim Rice however, like the additions to the plot, are done well enough but aren’t exactly necessary. “Days in the Sun” feels a little too much like padding and effectively serves as a stand-in for “Human Again”, a song cut from the theatrical version of the animated film because it was exactly that: padding. “Evermore” fares better considering it gives Beast the solo he never got in the original, as well as some context to his decision at the end of the second act, but again you could skip it and miss nothing. On a visual presentation level, it has that similarly grand “fairy tale come to life” feel the new Cinderella really nailed, with lavish sets and beautiful costumes that really help transport you to a fantastical world. The visual effects are noticeably less detailed than in last year’s Jungle Book, especially on The Beast, but are still well above average compared to most modern VFX and is more forgivable considering the more heightened aesthetic of this film comparatively.

Watching this new Beauty and the Beast is like watching a new production of a played you saw and loved many years ago: you still enjoy it and appreciate what is different about it, but nothing compares to that first time. It thankfully recognises that the original film is just as effective today as it was twenty-five years ago, seeing no need to drastically alter the story through needless subversion (I’m still looking at you, Maleficent). What it does choose to update are small but much appreciated refinements, and even though many of the larger changes are perfunctory none of them drag the movie down significantly. Younger audiences who may have never seen the original are going to love this, and older fans are going to appreciate seeing a piece of their childhood given respect and offer them a chance to see it fresh again. The experience can often feel like déjà vu, but not in an unnerving way. More like an “I’ve just gone back to a happy memory and appreciate being reminded of it” sort of thing. If that makes any sense to you.