Hey, who here remembers Snow White and the Huntsman? Anyone? No? Well, Universal Pictures remembers it and apparently it made enough money to warrant another one, so here we are! Now all jokes aside, I actually liked Snow White and the Huntsman in several ways. I think it’s an absolutely gorgeous movie thanks to its cinematography, production and costume design, visual effects, and score. Those elements were so good that it was easier for me to excuse the thinly developed story and characters, but there were some hidden depths to the screenplay and they at least hired talented actors to play these roles. But even if that movie was excellent all around, waiting four years to capitalize on it and doing so without both your original star and director (which makes sense if you remember celeb gossip in 2012) would still feel like a perplexing move. And now that I’ve actually watched The Huntsman: Winter’s War, I can confirm it is truly as pointless a movie as it sounds. 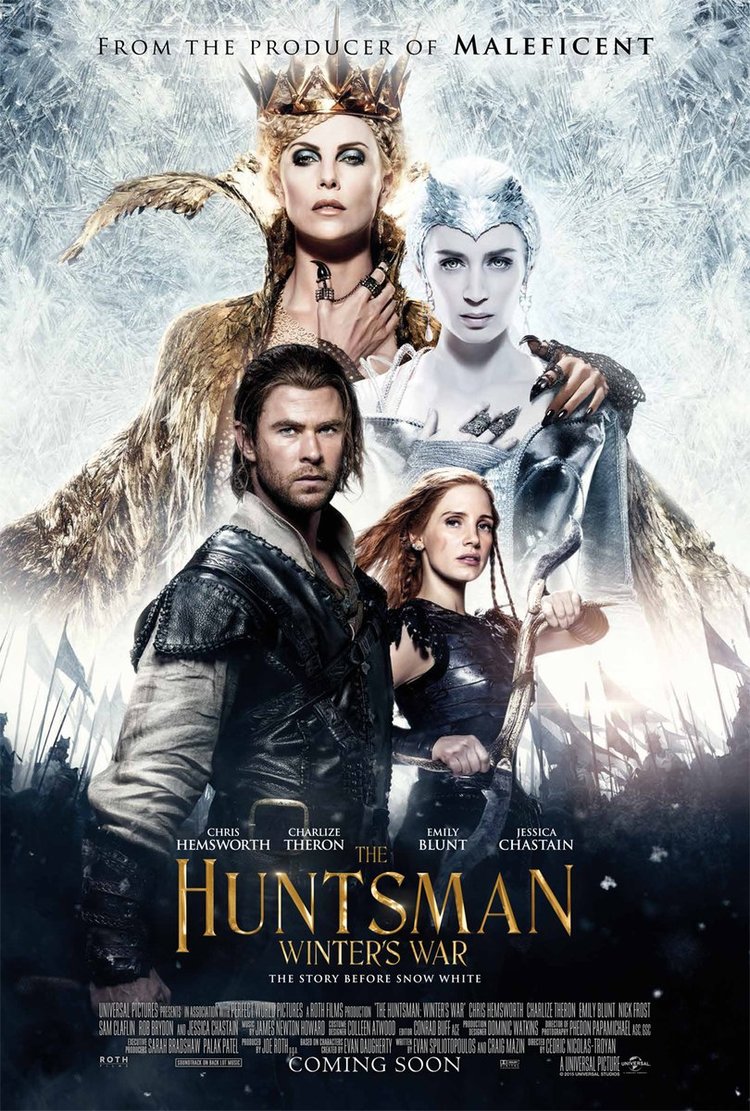 Now Winter’s War has been marketing itself as a prequel to the first film, but in reality it only is one for the first fifteen minutes; the on-screen card after which might as well just say “seven years later, after the first movie happened…” Now having to write around not having Kristen Stewart shouldn’t be too tricky. With the right imaginative mind, there is ample opportunity to expand the universe of the first film and tell a new story that doesn’t have to heavily rely on what came before. But Winter’s War makes the bad decision to heavily rely on the first film for its plot, in the process creating some serious problems. Snow White never appears in person outside of stock footage and the back of an obvious stand-in but she’s constantly referred to as if she’s a main character, and the backstories of Eric (Hemsworth) and Ravenna (Theron) have been expanded upon in ways that contradict what we were told in the first movie. But even ignoring those inconsistencies, the story and writing in this film is plain lazy and uninteresting. 90% of the dialogue is pure exposition, the pacing is achingly slow, the first act is plagued by constant narration explaining the obvious, the entire climax takes place in one room, and the film’s message is so tired and simplistic that TV shows targeted at toddlers wouldn’t use it. It really does feel like no effort was put into constructing this movie, and that sentiment unfortunately also extends to the film’s cast.

Chris Hemsworth is a naturally charming actor and that does come through in his second turn as Eric, but despite this supposedly being his movie he’s given pretty much no character development. We learn all about how he became The Huntsman, we learn about the relationship with his wife (Chastain) hinted at in the first movie and how that made him bitter, but he still remains an utterly bland presence in the story; all he does is walk in, make some wry comment, and then hit people with an axe. At least he’s actually in the movie for its majority, as Charlize Theron only clocks in about ten minutes of total screen time despite being the main antagonist, and her acting completely lacks the intensity of her over-the-top but compelling performance in the original. The only other returning players are Sam Claflin in what amounts to a cameo, and Nick Frost dragging along three new dwarf characters pointlessly along because they couldn’t get any of the others back. Now getting Emily Blunt and Jessica Chastain in your movie should add a great deal of life to it, but neither of them are given much to work with. The motivation of Blunt’s Ice Queen can pretty much be summed up as “I hate love and I kill anyone who feels it”, which is a dumb enough motive on it’s own but it also means she spends most of the movie acting like an emotionless popsicle. The movie also never makes up its mind as to whether we should fear or sympathise with her, and that fact it takes her the entire movie to figure out a shocking twist that should be obvious to anyone watching the movie doesn’t exactly speak well of the character’s intelligence. Chastain, meanwhile, struggles through a Scottish accent that she forgets she has with every other word whilst being stuck with the character template of Generic Female Bad-Ass Scorned By Love, lacking any romantic chemistry with Hemsworth and with no effort to really explain why they’re in love beyond “they looked at each other a lot as kids”.

Snow White and the Huntsman had a real grit to its visual style, with lots of fog looming through dark forests and dirt plastered across its cast and locations. This movie, in contrast, feels far too bright and clean, and in the process it makes all the artifice incredibly obvious. The sets look incredibly fake at points, as if you could lean on a wall and push it over to reveal it was simply painted wood, and the costumes have gone from beautiful and intricately detailed to gaudy and overdesigned. James Newton Howard’s score even feels tired, right down to the fact parts of it are taken straight from his score to the first film; not reorchestrated elements of themes, literally copied and pasted. You’d think at least the visual effects would be decent, given the film is directed by a former visual effects supervisor (which is never, ever a good sign), but they would look outdated even in 2012 when the first film came out. Pretty much nothing in this movie made me believe in this world, and of all the things a fantasy film should do that’s easily the most important.

You know those direct-to-DVD sequels to big movies you sometimes find on Netflix? The ones that are usually only tangentially related to the original and purely feel like a cash grab? The Huntsman: Winter’s War feels like one of those with a bigger budget and a theatrical release, but with the same amount of effort thrown in regardless. I wouldn’t say this movie is worthy of contempt, as it at least didn’t offend me or anything, but it’s still pointless nonsense that lacks any reasonable excuse to exist. And this is coming from someone who actually liked the first movie. I think that alone should confirm its quality.