Seeing Batman and Superman together on the big screen was a childhood dream of mine, and I’m pretty sure I wasn’t alone in that line of thought. Warner Bros and DC have tried many times over the years to fulfil that dream, but it seems every time they attempted it always fell apart. But now, what was merely a hypothetical scenario to comic book geeks the world over is now a motion picture playing at a cinema near you. These two titans of popular culture are here to face off against each other. The hype could not be any more ferocious. An entire franchise’s future rests on the success of this one movie. Does it ultimately satisfy? Well…I guess it depends who you are. 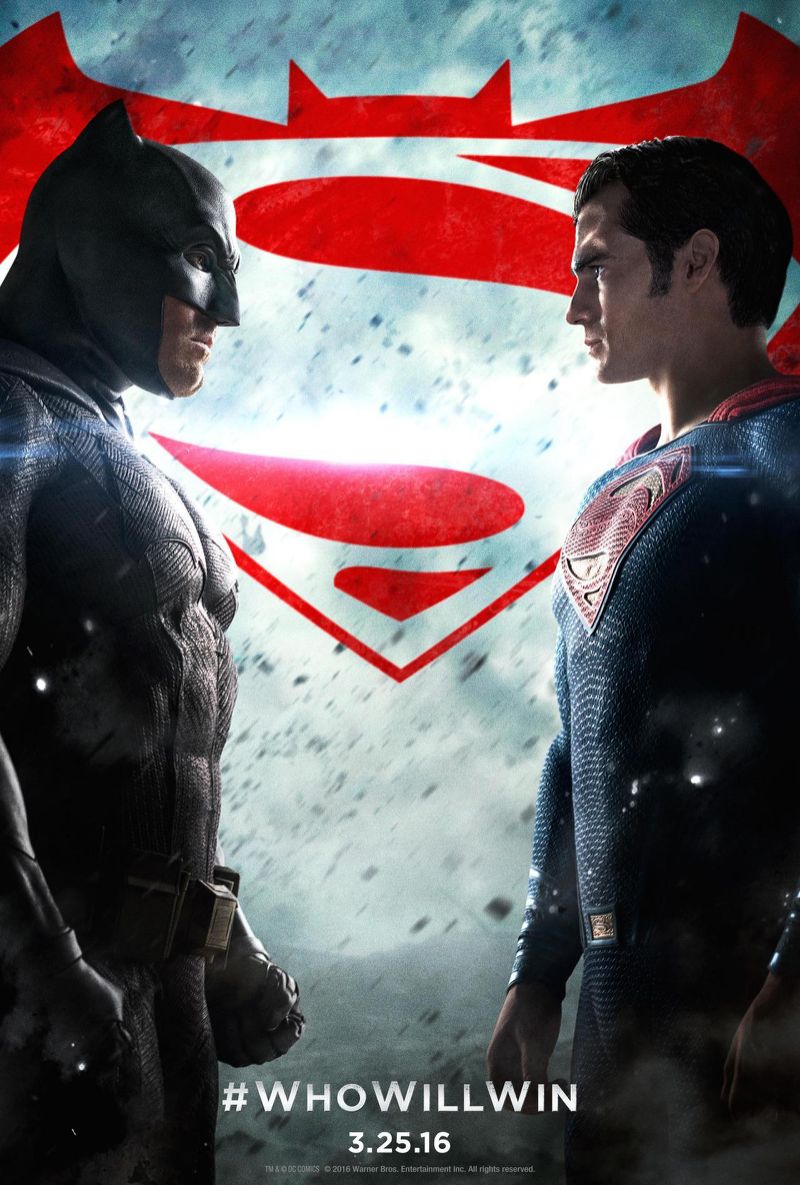 In terms of raw entertainment value, Batman v Superman: Dawn of Justice does try to give you as much as possible. Not only pitting the Man of Steel and the Dark Knight against each other, but also throwing Wonder Woman into the mix and setting the stage for a slew of DC Universe pictures, you cannot say this film is lacking for content. If anything, there is way, way too much going on. On a structural level the movie is an absolute nightmare, with the first two acts wildly jumping between half a dozen loosely connected narratives with no clear through line or perspective. The pacing is so haphazard that nothing is lingered on for long enough to properly invest in these characters, and the worst part of it is that so much of it is superfluous. There’s a whole subplot involving African terrorists and Russian mercenaries that’s only there to give something for Lois Lane to do in the first half, there are several dream sequences that are visually interesting but poorly integrated into the narrative, the film pretty much pulls its brakes in the middle of the third act in order to tease Justice League, and did we really need to see Batman’s origin story again? However, within the sloppiness of the story’s design can be found some really awesome stuff. The film does try to address the controversial elements of Man of Steel, diving more into the moral quandary a figure like Superman would cause in our world, and how it explores that from Batman’s perspective retroactively makes its predecessor’s ending mean something. The film’s third act does ultimately pay off and delivers exactly what is promised in the film’s title, making up for the unfocused beginning with a series of spectacular action sequences that don’t overstay their welcome the way Man of Steel’s did. Whilst it does end on somewhat of an uneven note, the promises this universe offers for exploration remain intriguing, and now that they’ve gotten all of this setup out the way, perhaps they can focus on telling a more coherent narrative next time.

What ultimately gives Dawn of Justice more life is its excellent cast, who manage to overcome the film’s narrative shortcomings to deliver all around strong performances. Remember three years ago when the Internet was infested with Ben Affleck haters after his casting? Well, they’re going to eat their words when they see his interpretation of Batman, because in a few scenes he quickly ranks up there as one of the best. He’s certainly the most brutal and intimidating Dark Knight ever put to screen, but never to a level where it seems grossly out of character like, say, Michael Keaton’s interpretation was at times, and he sells the physicality of the character far better than Christian Bale ever did. Whether you end up liking the movie or not, it’s hard not to get excited about this being the Batman we get for the next few years. Superman gets some much needed character development this time around as he further explores how his actions affect the world, and Henry Cavill has certainly honed his interpretation of Kal-El from Man of Steel into a strong centrepiece figure in this evolving universe. He and Affleck maybe don’t get as much screen time together as I would have liked, but in those moments they have strong chemistry whether butting heads or working side by side. Jeremy Irons also makes for a fantastic Alfred, nailing the sardonic sense of humour so often missing from other interpretations of the character, complimenting Affleck’s brooding determination excellently. Gal Gadot’s Wonder Woman was another figure of much debate upon her casting, but like Affleck she also defies expectations and finally brings the Amazonian warrior to life in a respectful and kick-ass way; her screen time is limited, but what’s there is wonderful and I’m even more excited to see how her standalone movie fares next year. Jesse Eisenberg’s Lex Luthor will certainly be the most divisive character, and I ultimately thought he was a bit of a mixed bag. Eisenberg’s performance was an interesting if wildly different interpretation of the character, playing him like a volatile mix of Mark Zuckerberg, Donald Trump and Max Landis, but ultimately it’s the script that scuppers him. The movie just fails to give Luthor a concrete motivation for his actions, instead having Eisenberg flit from collected tactician to fanatical eccentric (and don’t say “because he’s crazy” is his motivation). Holly Hunter, Scoot McNairy and Tao Okamoto are frankly wasted in their parts that are built up as important but are ultimately negligible by the halfway mark, whilst returning cast members like Amy Adams, Laurence Fishburne and Diane Lane are as strong as they were in Man of Steel but lack the screen time and story importance to truly shine.

Zack Snyder’s vision of the DC universe draws from many different sources, but mainly from works like “The Dark Knight Returns” and the New 52. It’s a grim looking film with muted colours and harsh lighting, but it does certainly capture the look of a comic book better than most DC adaptations to this date. The cinematography is far more controlled and fluid than it was in Man of Steel, which thankfully makes the action sequences more comprehensible. Speaking of which, the fight choreography is visually spectacular and captures the heightened sense of reality found in comic books better than most. The standout is a warehouse fight between Batman and an army of goons, which clearly draws influence from the fight mechanics of the Arkham video games to create a flowing and visceral thug beat down. Hans Zimmer teams up with Junkie XL for the film’s score, adding onto the already excellent Man of Steel pieces with some more modern accentuations; Wonder Woman’s theme “Is She With You?” is especially fist pump-worthy. The film’s editing, unfortunately, further adds to the structural clutter of the movie, as very rarely does one scene naturally segue into the next; pretty much every other scene ends with a cut to black. The visual effects are a little overly stylized and, like many of Snyder’s other works, it’s a little unclear whether the unreal aesthetic is intentional in order to highlight the artifice of the movie or not.

Like Man of Steel, Batman v Superman: Dawn of Justice is going to end up being a highly divisive film. What it gets right is pretty equally matched with what it gets wrong, and ultimately it’s going to be up to you to decide what you liked and didn’t like. I can only offer you my opinion, and mine is overall in the positive. It delivers an exciting event movie experience, the kind of movie designed to be seen on the biggest screen possible and to be enjoyed purely from an entertainment perspective, and if you can do that there’s plenty of fun to be had. But the true film critic in me cannot deny the movie has some serious flaws that come dangerously close to sabotaging the whole enterprise. The amount of story threads and sequel baiting done here often puts The Amazing Spider-Man 2 to shame, throwing everything at the screen at once rather than neatly organising its smorgasbord of ideas in a more cohesive manner. In spite of these problems, it does at least lay a stable foundation to build more stories upon, and hopefully this summer’s Suicide Squad can inject some much-needed personality back into the mix.