So we’re back again, huh? The Terminator franchise hasn’t had a solid entry for nearly three decades, and yet the legacy of those first two films has kept it alive through critical and box office failure. After Genisys failed to produce its promised trilogy, it really felt like the series might have finally been put to rest, and yet the future has yet again found a way. However, Terminator: Dark Fate has two things all of the other sequels lacked: Linda Hamilton and James Cameron. With the series creator once again overseeing as a producer and story co-writer, and its former star now back in a leading role, the franchise once again has the tools necessary to maybe create something worthy of its name. The final result is perhaps not a patch on Cameron’s two classics, but it does give the series something it has lacked for a long time: hope. 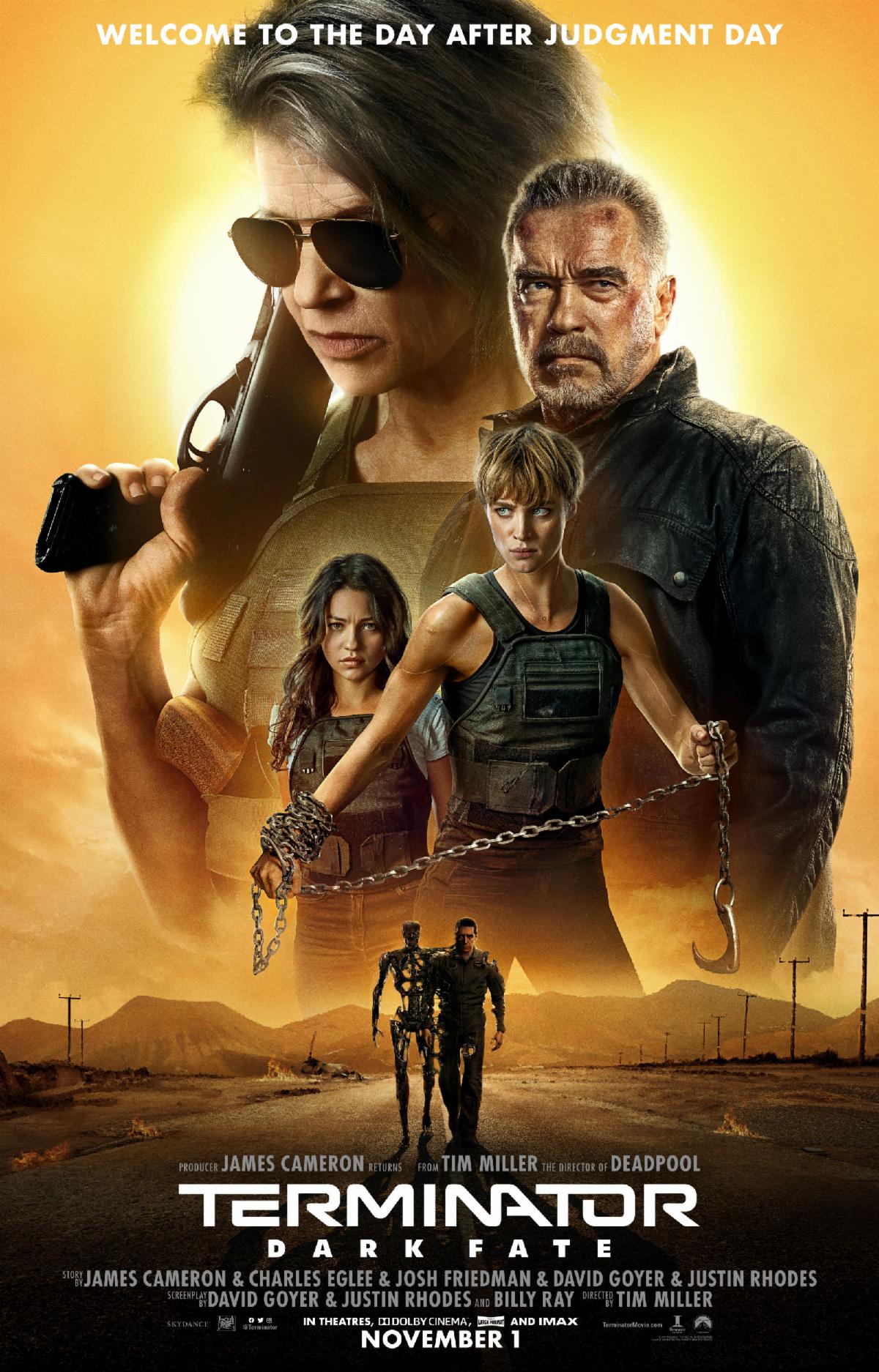 Ignoring all instalments after Judgement Day, Dark Fate is a back-to-basics return to the formula established in the 1984 original on a structural level, but it avoids falling into the trap of just being a rehash like Rise of the Machines. It recycles some of the better ideas of the now non-canon sequels from a fresh angle, but for the most part this is a new film that aims to look forward rather than playing purely for nostalgia. The story may perhaps be a little predictable to franchise fans and certain plot devices are a little too convenient and lack explanation, but it mostly manages to avoid the clichés that ran the series into the ground in the first place. When you get down to it, Dark Fate is using that familiar framework to put focus instead back on the franchise’s themes, updating and fleshing them out for a modern age where technology has greatly advanced and the socio-political climate has made us more divided. The series is still about belief in the face of annihilation and resisting inevitability, but Dark Fate specifically discusses how destinies aren’t tied to specific individuals and that anyone can evolve beyond their expectations. It relies far less on iconography and call-backs to prove itself a Terminator film, and as a result it feels less tired and the recycled plot elements seem far less blatant. Ultimately, the reason Dark Fate succeeds where the Cameron-less entries didn’t is because it actually feels like it has something to say.

The main mistake pop culture seems to have made about the Terminator franchise is that the T-800 is the star, ignoring the real reason those first two films resonated: Sarah Connor. All of the entries since Judgement Day have missed this obvious point; Rise of the Machines had her killed off between films, Salvation relegated her to voice recordings, and Genisys had her play second-fiddle to Kyle Reese. The series needs Sarah and, more specifically, Linda Hamilton playing her, and here she absolutely proves why there is no Terminator without her. Sarah has only grown more bitter and paranoid since the second film, and Hamilton’s portrayal of her pessimism, resentment and even prejudice all ring true. It is a sad but natural evolution to the character, which only makes it more rewarding as she learns to find hope again. Schwarzenegger is relegated to a third act supporting role instead, but he’s absolutely fantastic when he finally shows up and brings some much needed humour and closure to Sarah’s arc, as well as a logical next step for the humanization of the T-800.

Mackenzie Davis and Natalia Reyes slot into the series archetypes of the protector and the target well, but neither are straightforward rehashes. As enhanced human soldier Grace, Davis feels like a more fleshed-out and compelling version of what Salvation attempted to do with Sam Worthington’s character, making for both a flawed but badass heroine and a worthy foil to the world-weary Sarah. Her back-story and motivation feel a tad simplistic and underdeveloped, but from a performance perspective Davis absolutely proves she has action movie chops on par with Hamilton. Reyes’ Dani at first doesn’t seem too different to young Sarah in the first film, but she quickly shows herself to be a fiery and street-smart protagonist with a potentially interesting future ahead. Gabriel Luna as the new hunter Rev-9 adopts a similar eerie charm to Robert Patrick’s T-1000, and whilst not as iconic as him or Schwarzenegger he proves himself a worthy foe and is still easily miles more enthralling than the likes of Kristanna Loken or Jason Clarke.

When James Cameron is involved in a film, you know the production values are going to be of a high standard. Teamed with Deadpool helmsman and VFX veteran Tim Miller, Dark Fate is a seamless blend of old-school practical action filmmaking and modern CGI mastery. It feels like a natural evolution of the techniques pioneered by T2, and the result is action that feels grounded and real and is then elevated by the technology. The set pieces are especially heightened by Grace’s superhuman enhancements and Rev-9’s ability to divide its consciousness, and the result is classic Terminator action but with fresh twists. The film’s production design is a seamless blend of old and new, with classic iconography like the T-800’s red heads-up display slotting perfectly next to Grace’s sleeker HUD. The visual effects are extensive but never overtake the entire film, and the film opens with absolutely the best digital de-aging and likeness recreation I have ever seen; eat your heart out, Gemini Man. Tom Holkenborg’s score has more of a techno influence than previous franchise scores but is fitting for the updated setting, and cleverly withholds using the classic Terminator theme until it means something.

Terminator: Dark Fate is the first good Terminator movie since 1991 and it’s about damn time. It’s nothing fresh from a plot perspective, but in terms of character and theme it’s the only film since Judgement Day that seems to understand the franchise’s core appeal. If nothing else, the film is testament to the fact that Linda Hamilton is an unsung gem and more than deserving of a comeback. Plenty of people are going to compare the film to The Force Awakens, and whilst not as great as that film it does admirably achieve similar goals. The opportunity for future entries is certainly possibly and with far better incentive to do so, but I’d equally respect them if they decided to let it finally end on a good note.

One thought on “TERMINATOR: DARK FATE – an Alternative Lens review”