We like to think of outer space as this awesome unexplored frontier, and that adventuring through it would be this grand adventure full of excitement and wonder. In reality though, knowing the real science of space travel, going on an intergalactic trip would actually involve a lot of down time spent isolated in the middle of a vast void. Sounds a lot more harrowing when you put it like that, eh? Ad Astra is a film absolutely aware of the realities of this potential future, tapping into that sense nothingness to craft a sci-fi tale that asks the age-old question of “are we alone in the universe?” in more ways that one. 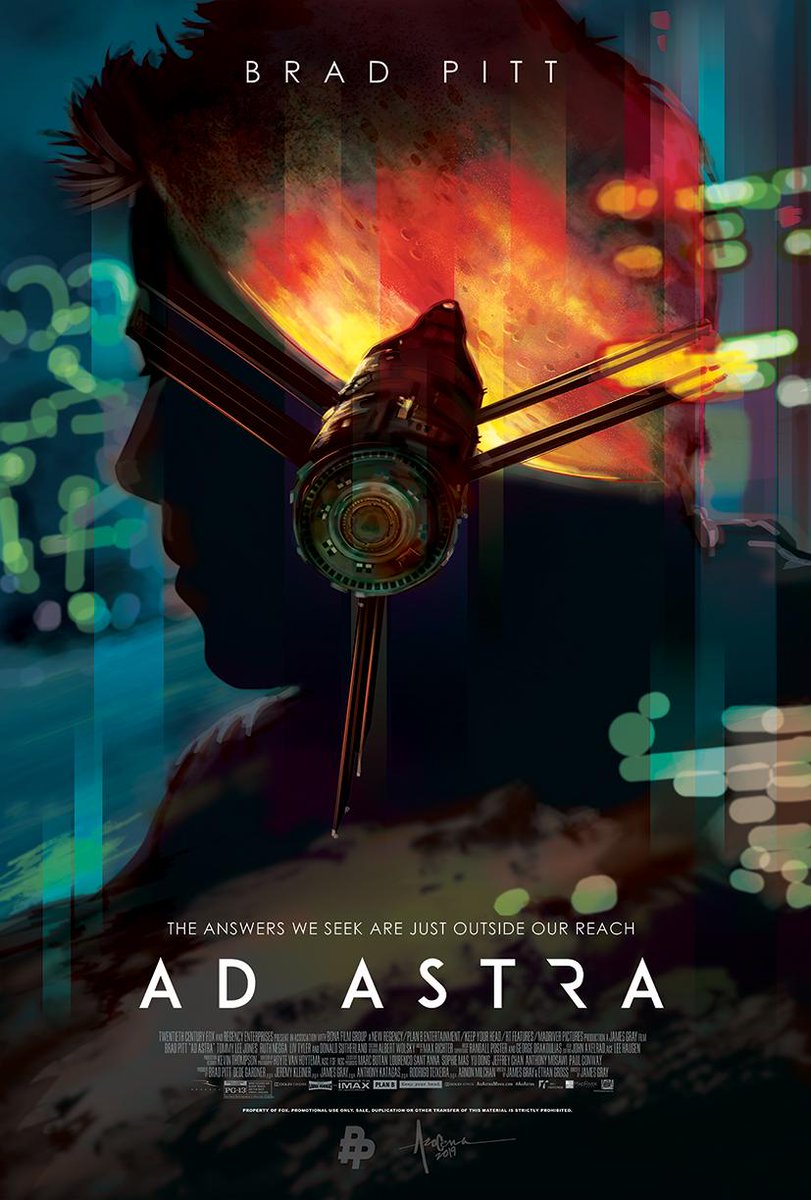 The marketing for Ad Astra has been purposefully obfuscating, selling the picture as more of a straightforward futuristic action movie. However, the final product is actually far more in the vein of the contemplative sci-fi flicks of the 1970s like Solaris or Silent Running. This shouldn’t be too much of a surprise to fans of director James Gray’s other work, but those expecting something as thrilling as Gravity or Interstellar may be left wanting. Fortunately, those willing to accept Ad Astra’s real mission will find a film that is deep, engrossing, and wrought with emotional depth. The story is simple and engaging, but theme and emotion take precedence, as the film tackles subjects like loneliness, psychology, work addiction and childhood trauma in a brutally honest but ultimately optimistic fashion.

That’s not to say the film is completely without respite from its sorrowful musings. Though it moves at a deliberate pace, the story is solidly structured and doesn’t bog itself down with needless detail, relegating much of its extensive world building to background details and assumed familiarity. The result is a film that takes its time, but is just brisk and efficient enough to never bore. This also means that when the action does finally hit, there’s a weight to it; it functions as a tension breaker rather than just something to keep the audience awake. When you take away all the space-faring bells-and-whistles, Ad Astra is the story of a man contemplating how his relationship with his father has shaped him and his world, and it’s one that anyone with their own parental struggles can find something to relate to.

For a career as varied and well-regarded as Brad Pitt’s, it’s surprising to realise he’s never really stepped his foot in the realm of science fiction before. However, what’s not surprising is that Pitt knocks it out of the part. Whilst his presence in the pop culture often has him pegged as a charming heartthrob, the actor has a knack for handling disturbed and off-putting characters, and here he delivers his best performance of that type since Fury. As Major Roy McBride, Pitt is cold and contemplative, brought to a near emotionless state by his trauma, but there’s a sadness and frustration that bubbles to the surface in key moments.

Pitt carries much of the film on his own, with even major supporting cast members like Liv Tyler and Donald Sutherland getting fleeting screen time (there’s even a bizarre cameo about two-thirds in by a certain comedienne, so look out for that). The only other cast member who gets ample time on screen is Tommy Lee Jones as Roy’s estranged father Clifford, but he totally kills it when he gets the chance. Jones is often typecast as the same gruff sardonic hard case in everything, but here is far from that, instead revelling in playing a deranged but dedicated scientist that is simultaneously menacing and pitiful; it’s easily his most distinctive performance in recent memory.

There are so many cinematic depictions of the future that it’s impossible to count all the variations, but Ad Astra is certainly one of the more distinctive. It balances the scientific and the fantastical elements of its world perfectly, creating something that seems utterly tangible yet also otherworldly; basically imagine a slightly more grounded depiction of the future from the original Total Recall. The technical presentation across the board is absolutely top notch, from Hoyte van Hoytema’s gorgeous cinematography to the near-flawless CGI work that makes every fantastical image seem oh-so-tangible.

The visual effects are especially key in selling the film’s action sequences, which whilst few and far between are thoroughly fantastic. From the opening antennae sequence, to a buggy chase across the Moon, to the final confrontation in deep space, the only moment that breaks this illusion that this is all movie magic is one slightly tacky-looking CG beard towards the end. The film’s audio is also equally impressive; Max Richter’s score is haunting and ethereal, whilst the sound design utilises the silence of space to phenomenal effect.

Ad Astra is a kind of movie you rarely see anymore, using blockbuster assets to tell an arthouse story, but it’s a superb original blend that we need more of in our increasingly homogenous film landscape. It wears its references on its sleeves yet still stands out from its peers, and the film deserves plenty of recognition come awards season for its technical achievements alone. It may not be a crowd pleaser and could leave some feeling deflated or even depressed, but for those willing to take this journey, it’s an emotional rollercoaster you won’t soon forget.