Writers: Dan Sterling (The Interview) and Liz Hannah (The Post)

The traditional romantic comedy formula has become pretty rote by now, to the point we’ve seen multiple satires like Isn’t It Romantic? and They Came Together that take their own stabs at the clichés of the genre. However, rarely are the best modern rom-coms the ones that completely buck the formula or make light of it. Instead, they tend to be films that follow the trend but bring a unique perspective or topical subject matter to the table, and Long Shot is one of the best examples of the subversive yet traditional rom-com in a long time. 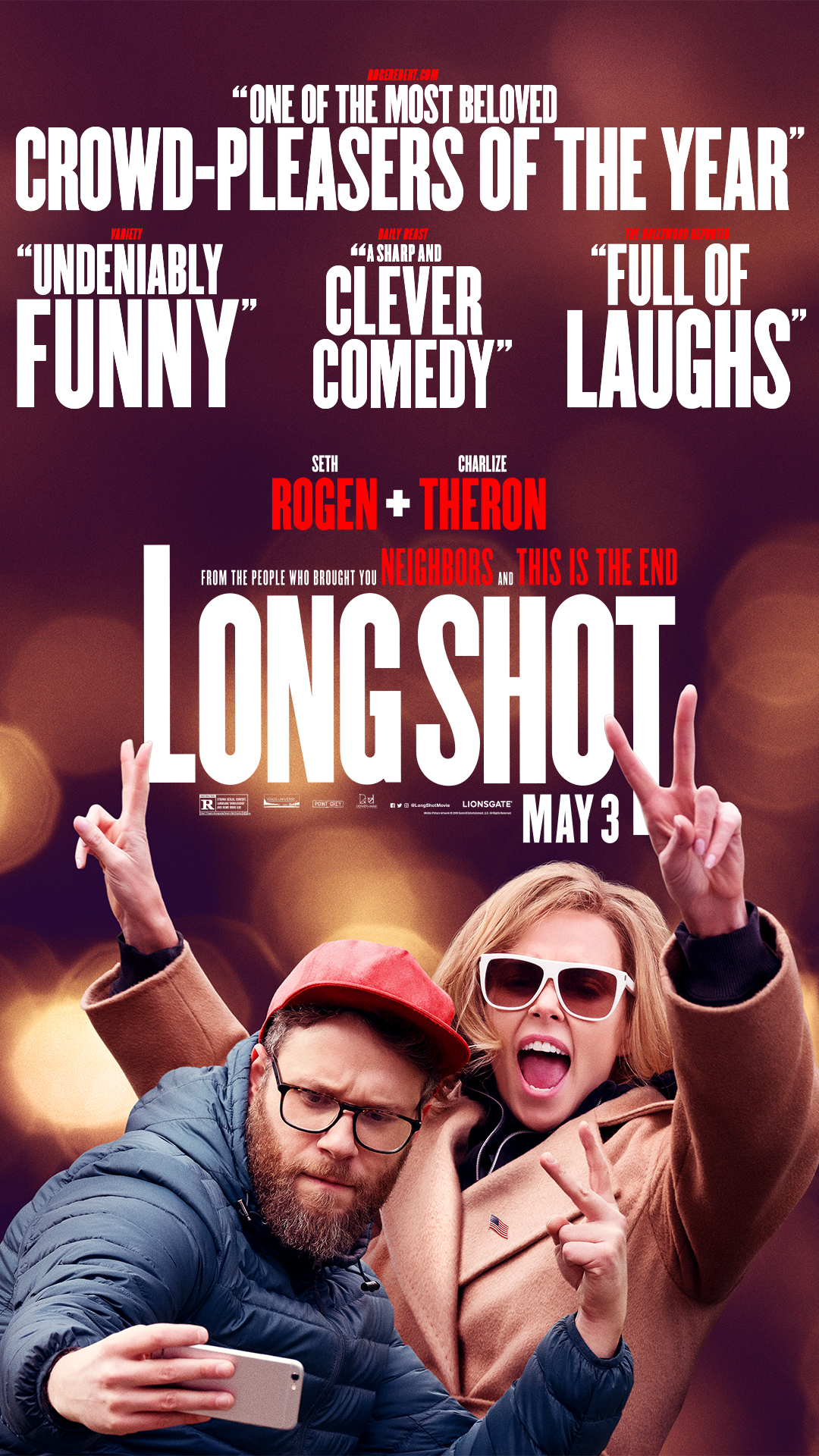 In essence, the movie is yet another riff on the classic social class mismatched romance dating back to My Fair Lady, and it is very much aware of that comparison right down to it directly cribbing from the Pretty Woman soundtrack. Where Long Shot gains its unique voice is by structuring the narrative around an on-the-nose but nonetheless biting and hilarious commentary of contemporary American politics. The film functions as an interesting dialogue about expected talking points like the glass ceiling on female politicians and the corruption of the right wing, but also less discussed issues like political compromise and opening a dialogue with ideological opposites. Yes, there are plenty of the sex and drug jokes you’d find in a modern comedy, but they are smartly woven in without feeling like a sudden tonal shift; in the best of cases, many of these scenes that may at first seem like humorous nonsequiturs ultimately prove to be plot-essential. It’s a bizarre mix of highbrow and lowbrow comedy that makes the film palatable for a winder audience, and may even get a more apolitical audience member to finally care about some of the bigger questions.

We’ve seen plenty of disparate couples who somehow end up falling in love regardless since the dawn of the genre, but none have been quite so seemingly incompatible yet perfect for each other like Charlize Theron and Seth Rogen. Given the film’s mash-up of political drama and stoner comedy, Theron and Rogen are practically perfect representatives of those disparate worlds. Though they absolutely perform as well as you’d expect when playing to their well-established strengths, their performances truly shine when they go against type. Theron has never quite gotten the chance to let loose in a comedy quite so effectively before, humanizing what could have easily been just a caricature of a democrat, and portrays her with a believably human conflict of balancing her ambitions with her morals. Likewise, Rogen is absolutely believable as a weary whistle-blowing journalist, and does have fantastic job of balancing that anger with corrupt politics with his expected penchant for weed and pop culture. Their chemistry is absolutely through the roof from the beginning, to the point where can’t imagine this film working with any other pair of actors. Seriously, I want these two to now be in more films together. I don’t know what those films would be, but I want to see them pronto. Seriously, they are adorable together.

But even beyond our two comically incongruous lovebirds, the supporting cast is full of great turns from unexpected places. O’Shea Jackson Jr.’s turn as Rogen’s longtime friend is funny and charming before seamlessly transitioning to poignant and grounding, Alexander Skarsgaard’s hilarious pastiche of a Justin Trudeau-esque Canadian politician provides some great moment of uneasy humour, Bob Odenkirk’s self-obsessed president manages to be a spot-on takedown of the current commander-in-chief without retreading the same tired jokes, and an unrecognisable Andy Serkis is deliciously slimy as a conservative media mogul that simultaneously channels both Rupert Murdoch and Steve Bannon into a squeamishly toady villain.

However, even the best romantic comedies have their chink in the armour. There are many kinds of problems that these films can fall ill to, and in the case of Long Shot it’s a variation on the asshole character that only serves to get in the way of our heroes’ love. Here, that role is played by June Diane Raphael as Theron’s main campaign adviser. The character comes off as too cartoonishly dismissive right from the off, to the point where you either suspect she may make a treasonous turn later on, but the character ultimately doesn’t go through any kind of arc or comeuppance. In the end, she’s just someone to antagonise Rogen throughout and constantly be the voice blaring, “You two don’t belong together,” and as cliché as it would have been for her to go turncoat or have a day-saving change of heart, it would have at least been something. Fortunately, it’s an irksome hiccup that thankfully doesn’t tamper proceedings too much.

Long Shot is a breath of fresh air for both genres it represents, bringing a brazen fearlessness to political commentary and progressive class to the stoner comedy. This is some of the best work both Theron and Rogen have delivered in recent memory, proving themselves talented in both of their comfort zones and beyond. More importantly, the film addresses our current political climate in a brash but honest manner, helping shine a light on our problems and how to improve upon them in a smart but accessible fashion. It’s a movie that has a little something for everyone without losing its identity, and deserves to become the Notting Hill of this generation.

One thought on “LONG SHOT – an Alternative Lens review”