The original Hellboy movies from Guillermo del Toro are still a rare beast amongst the glut of comic book movies even a decade later. They were macabre and fiendish, steeped in its demonic inspirations but still oozing with humour and heart. They may not be perfect movies, but they were distinctive and many a filmgoers’ introduction to that world. Fans have been clamouring for years for del Toro to make his long-promised third entry in the series, but poor box office and the director’s hectic schedule eventually led to those plans going nowhere.

Instead, we get what was always inevitable: a reboot. Whilst doubtlessly not the preference of most fans, the project had a lot of promise at the outset. Neill Marshall is a talented director who has yet to given such a big shot at a franchise, David Harbour was an inspired choice to take the title role, and creator Mike Mignola was heavily involved in the film’s development. Unfortunately, all of those pieces didn’t result in much of anything, and instead this new Hellboy ends up ranking amongst the worst comic book movies of the 2010s. 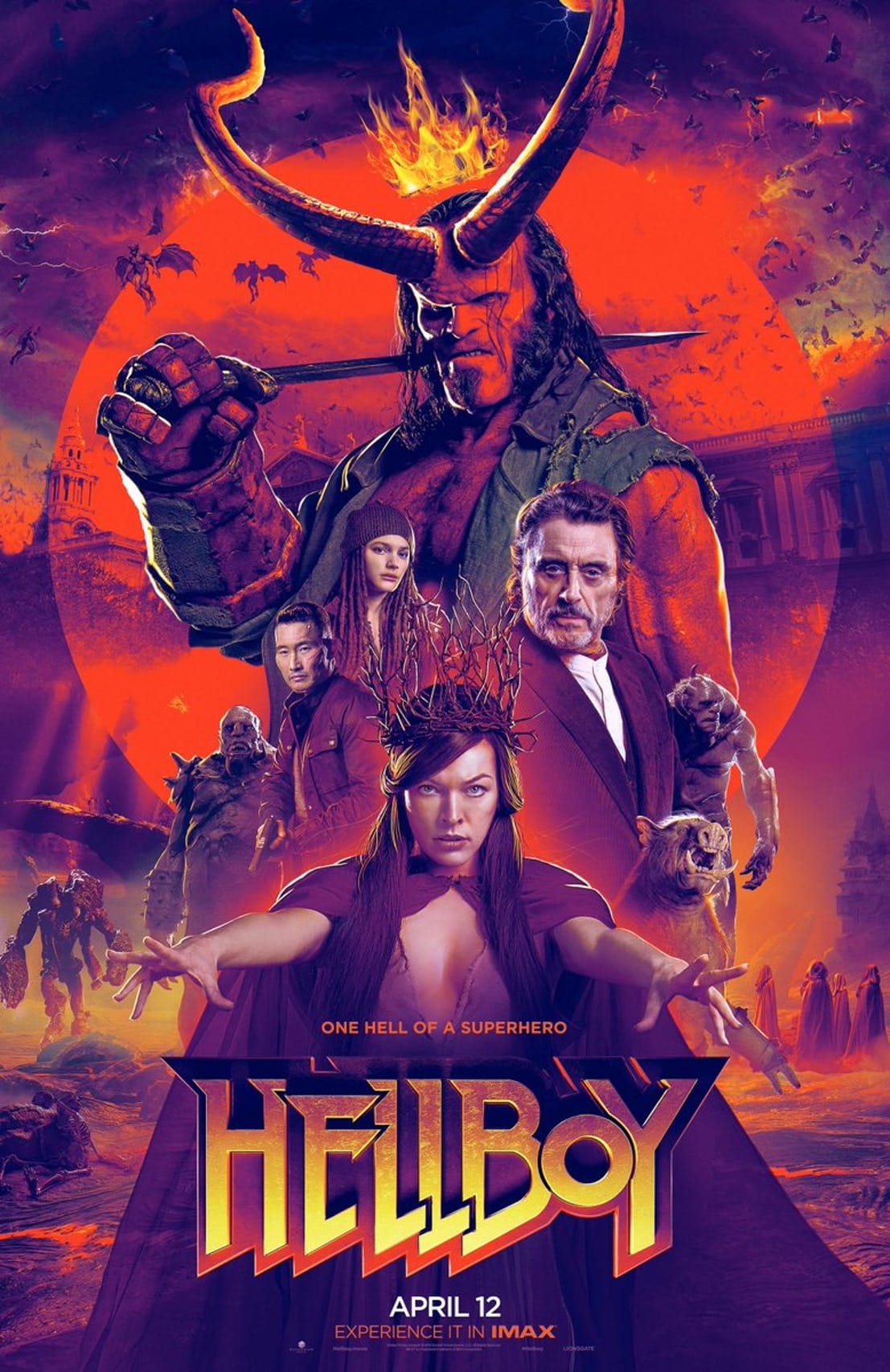 The movie faces much the same problem that The Amazing Spider-Man films faced: everything it does well was done before and done better in the originals, and everything new it brings to the table is just a bad idea. It’s most distinctive change from its forbearers is its shift in tone, taking a more lackadaisical, Deadpool-inspired approach, stuffing the film full of constant one-liners and abandoning much of the pathos and subtext del Toro brought to the material. Every other line of dialogue is some kind of snarky jibe, laced with a post-modern bitterness the filmmakers have mistaken for wit, and all the others are just exposition; it becomes a grading experience before even the prologue is over.

The plot is an extremely basic save-the-world yarn on paper, but the film has so clearly been hacked to pieces in post-production that it rarely flows with any coherence. There are entire sequences that could have been cut or simplified, whilst key character motivation and plot details feel curiously absent, leaving an experience that feels like a hollowed-out version of a much better movie that maybe existed at some point in development. Based on its conclusion, it’s clear the studio want to make a new franchise out of this, but they’ve unfortunately failed to make a compelling film first. Instead, they’ve tried to make up for it by cramming the film with foreshadowing and references to the comics and future stories; after Amazing Spider-Man fell apart at part two and the implosion of Universal’s Dark Universe before it even started, how many more prospective franchises have to make this same mistake?

Whilst it is incredibly hard to redefine Hellboy after Ron Perlman’s performance was so iconic, David Harbour does do a decent job of making the character his own. Unfortunately, the material he has to work with doesn’t make that easy. Hellboy is often a bitter and cynical character, but that was also balanced out by the tragedy of his very existence and his sense of humour in the face of it. This Hellboy forgets to effectively implement that caveat, and as a result Harbour’s character comes off as whiny, mean-spirited and unsympathetic; he is Hellboy through the lens of a teenage edgelord. With that said, he’s still somehow the best character in the movie.

This time around, our horned hero is up against Nimue the Blood Queen, and though Milla Jovovich is clearly having a ball chewing up the scenery playing her, there is little depth to her other than being the big bad final boss. Much like Harbour, Ian McShane is a solid successor to John Hurt as Professor Broom, but again the characterisation on the page lacks any semblance of compassion and he just becomes another inconsiderate gag-cracker. Sasha Lane’s role as Alice feels incredibly underdeveloped and serves little purpose other than to be plot-convenient in the same way on two separate occasions, whilst Daniel Dae Kim’s performance as Ben Daimio is practically crippled by his inability to maintain a consistent British accent.

From a design perspective, Hellboy actually shows some potential. It certainly borrows a few ideas from del Toro, but its R rating allows it to go darker and bloodier in its aesthetics, and a lot of the creature work is impressive whether executed practically or with CGI. Unfortunately, the film’s cinematography and editing make seeing any of this a particularly difficult task. Some sequences look great and flow well, particularly a one-shot action sequence towards the film’s end. However, that scene feels like it practically comes out of nowhere, because every bit of action before then is shot competently but blandly, and has then cut to shreds by the editor. Of the film’s many reported production difficulties, two of them were a sudden change in cinematographer, and the producers locking Marshall out of the editing room. It shows. The film’s score by Benjamin Wallfisch is bland and mostly fades into the background (which is a shame, considering he just delivered a fantastic superhero score with Shazam!), whilst the film makes appropriate soundtrack choices but crams in so much of it without meaningful context; Guardians of the Galaxy this ain’t.

Hellboy wants to be Deadpool, but in execution it’s much closer to Suicide Squad. It’s cynical and unfocused, and clearly thrown together from a production amidst chaos. Comparing this movie to del Toro’s duology feels unfair sometimes considering they have different ambitions, but the previous films actually delivered on their intentions whilst this one fails to even competently execute its own inferior ideas. In an already crowded superhero market, this new take on the Dark Horse character feels unnecessary and woefully behind the times, and is unlikely to find an audience that will secure the franchise aspirations it clearly has. Now can we forget this happened and just let del Toro make his Hellboy III already?