Of the many reasons Disney’s recent slew of live-action remakes can be tiresome is that they’re mostly doing slight updates on recent classics rather than radical new ideas based on older properties. The Jungle Book is still the prime example for the studio of getting that balance right, remaining faithful to the original whilst using the material to say something new. Heck, as much as I personally detest Maleficent, at least it tried to do something different. So in concept, Dumbo serves as an ideal opportunity for the studio to reinvigorate an animated classic with a modern sense of wonder, and in the hands of Tim Burton you’d expect the final result to at least be distinctive if nothing else. Unfortunately, Dumbo is yet another example of a lazy, unnecessary retread of tired ideas. 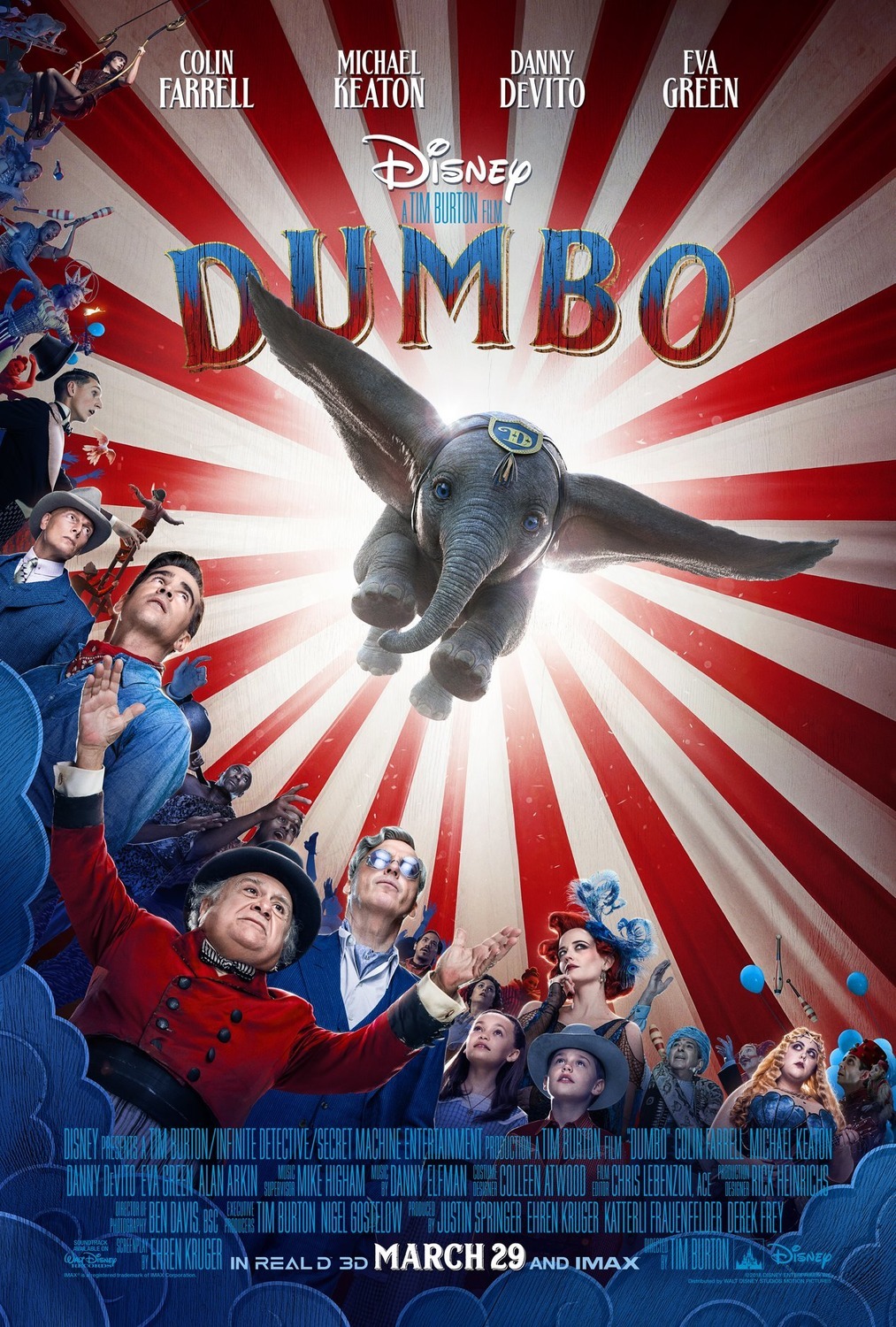 Effectively functioning as a remake and a sequel crammed into one movie, Dumbo never quite decides if it wants to be a faithful adaptation of the original or a subversive new take on the concept. It begins as an earnest if unremarkable recreation of the 1941 original, but once it reaches the climax of the first film the film essentially stops and resets itself into an entirely new plotline. The film’s structure is highly episodic, with only the highly predictable character arc throughlines barely keeping the plot connected. Halfway through, the story suddenly decides it wants to be about a giant corporation merging the circus into their entertainment empire for vaguely nefarious purposes, before ending in yet another overdone action climax unnecessarily bolted onto a children’s story that doesn’t need one.

Whether you think a Disney movie doing a negative portrayal of a conglomerate buying up and homogenising original ideas for the masses to be hypocritical or insurrectionist, it’s still a confusing and underdeveloped direction to go in. Kids are going to be bored by all the talk about buyouts and layoffs, whilst there’s no meat on the bones to make it an effective satire for the adults. This kind of commentary on American consumerism turning wonder into a commodity is the kind of concept Burton thrived at in his earlier films, but here he feels more on autopilot than ever. If I didn’t already know, I would have presumed this was directed by some journeyman director poorly trying to imitate Burton (a la Peter Berg copying Michael Bay for Battleship), and the fact that isn’t the case just further emphasizes how lacking in imagination and effort the whole enterprise is.

The cast assembled for Dumbo is an impressive reunion of Burton regulars with a few new faces, but it’s a shame there’s not much material for any of them to work with. Colin Farrell is the nominal lead as an amputee WWI veteran returning back to the circus, but his impact on the story is minimal and what’s there is played-out “I need to learn to listen to my kids and be a better father” pablum. Michael Keaton as the thinly-veiled Walt Disney allegory hasn’t been this bad since Need for Speed, delivering a baffling and OTT villain performance even by Burton standards; at least he gets to deliver the fabulously bizarre line, “You did it, you beautiful one-armed cowboy! You’ve made me a child again!” Danny DeVito is forced to rely entirely on his own natural charisma with a role that doesn’t afford him any opportunity to break the mould (remember, this isn’t even the first time he’s played a circus ringleader in a Tim Burton movie), whilst Eva Green’s circus acrobat completely shifts character for no discernable reason other than “Dumbo can fly and that is magical”.

However, by far the actors who fare the worst are newcomers Nico Parker and Finley Hobbins as Farrell’s precocious children. They are by far some of the worst child actors I’ve seen in a mainstream modern film in a while, and the fact they are saddled with a lot of patronising dialogue that overexplains the plot for the half-asleep kids doesn’t help either. With the sheer number of great child actors working today, there is no excuse anymore for performances this shallow and unconvincing. I could end there, but this film is rife with bizarre supporting characters worthy of their own analysis even within their brief screentime. From Joseph Gatt as Keaton’s stiff henchman with the indeterminate accent and elephant skin boots, to Phil Zimmerman as a cartoonishly abusive animal handler, there is no shortage of WTF characters in Dumbo. Also, Alan Arkin is in the movie as a disposable banker character that could have been played by anyone, and Michael Buffer makes a cameo in a painful riff on his ring announcer persona. Yeah, that really happens.

If nothing else, Disney always throws a lot of money behind these live action remakes, and the money spent on Dumbo is clearly on screen. It’s just a pity it was all spent on such a lacklustre vision. The film’s aesthetic looks like deflated Burton, without even the garish audacity of efforts like Alice in Wonderland or Dark Shadows. There’s a profound lack of character in the production design, with even the potential of this Rapture-like theme park dystopia the second half takes place in reduced to a lame “spooky” spin on Disneyland tropes. The visual effects are fairly solid, with the design of Dumbo himself balancing the right line between realistic and cartoonishly cute, and Danny Elfman’s score is suitably kooky and whimsical, but those only stand out because they are competent when compared to the disorder of everything else going on.

Dumbo goes beyond the mostly forgettable Disney live action remakes and is just straight up bad, and not even in a particularly remarkable way. It feels like the result of an unenthusiastic director working with a lacklustre script, under the eye of a studio more concerned with marketing the film than making it. It may not be Tim Burton’s worst picture, but it is easily his laziest, and not even the charms of its impressive cast and remnants of classic Disney magic can save it. We’ve got three more of these movies this year alone with Aladdin, The Lion King and Maleficent: Mistress of Evil, so I think the best I can say about Dumbo is that it at least sets the bar pretty low for those to come.