Director: Rob Marshall (Into the Woods)

Disney’s original Mary Poppins was a landmark film for the studio, proving their magic touch could transfer to live-action and garnering critical acclaim beyond the family audience, but it wasn’t all smiles and rainbows. The production was notoriously troubled, mainly due to the disapproval of author P.L. Travers. As a result, despite the film’s success, Travers refused to allow Disney to make any sequels. However, with Travers leaving the door ajar by approving a deal with Disney to make a stage adaptation of her books shortly before her passing, the House of Mouse has swept in again and finally made the sequel they’ve wanted for fifty-four years. So was Mary Poppins Returns worth the decades of hubbub and stand toe-to-toe with the original? The answer is, sadly, not really. 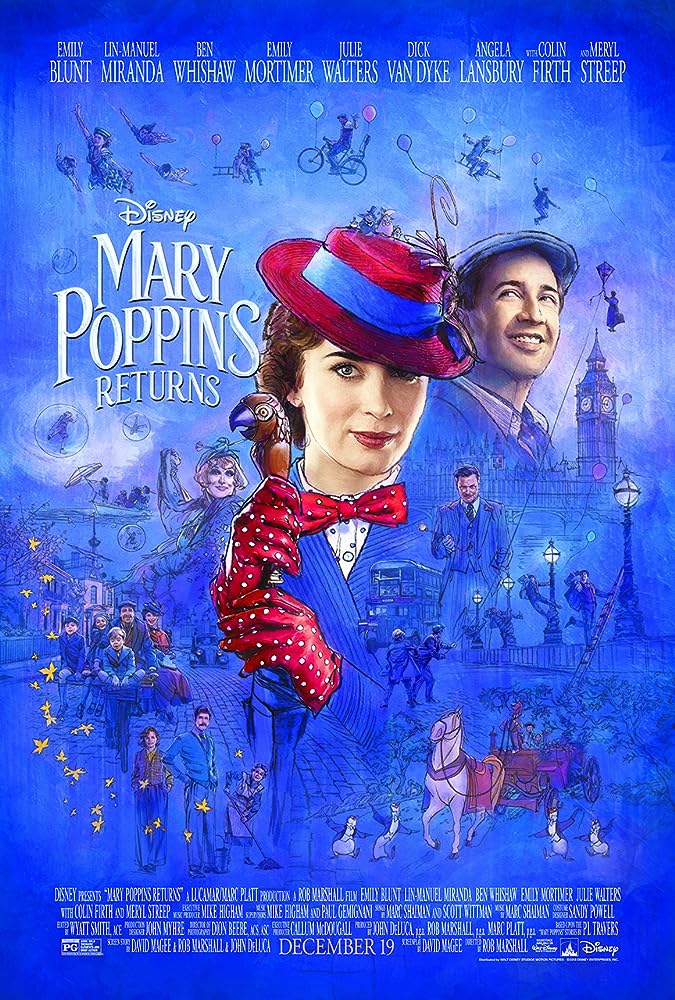 Mary Poppins was quite unorthodox in that it lacked a structured narrative. It flowed more like a children’s book, clearly far more concerned about the heart and message of the story than having a clean-cut plot. It was an approach that, whilst odd especially by modern standards, paid off incredibly well by the film’s end as it becomes clear it was about Mr. Banks’ arc all along. Returns ends up trying to have its cake and eat it too, indulging in plot cul-de-sacs for the sake of musical numbers like the first, whilst also trying to follow a more traditional three-act structure. The final result is a bit muddled, being neither a faithful recreation of the original’s style nor a fresh take on the material. The story is an incredibly pedestrian affair straight out of the book of kids’ movies clichés, relying on elements like a moustache-twirling villain and a race-against-the-clock climax that the 1964 classic didn’t need. Not only is this more rigid approach to storytelling at odds with the more freeform indulgences of the film, resulting in a serious of deadend superfluous plot threads, it ultimately cheapens whatever genuine emotional impact the story had going for it. Even then, most of what is effective is just lifted from the first film nearly beat for beat, and in the end “predictable and expected” are exactly the wrong words I should be using to describe a Mary Poppins film. Maybe the filmmakers thought a modern audience needed a definitive through line and clearer morals, but in doing so it actively works against everything the film does do to try and recapture the magic of the original film.

In terms of casting, I don’t think they could have found a better Poppins than Emily Blunt. She is absolutely delightful from her first appearance on camera, paying a great deal of reverence to Julie Andrews’ performance but more than making the character her own, perfectly capturing her witty charm and unpredictable nature. Unfortunately, the character of Poppins on the page is a less faithful translation, as she does something here she never did in the first: she directly intervenes in the plot. In the original film, Poppins functioned as more of a mentor and conscience, guiding the characters where they needed to go but allowing them to fulfil the needs of the story. Whilst that ideal is mostly adhered to, there are moments especially in the third act where Poppins is actively engaged and serving as a deus ex machina to problems the characters can’t actually solve. It’s a choice that once again doesn’t convince me that the filmmakers fully understand what made Mary Poppins tick and, as faithful a job Blunt does with her performance, the material fails to live up to those high standards.

Lin-Manuel Miranda certainly seems more comfortable with the cockney accent than Dick Van Dyke, but other than that his character Jack is essentially just a replacement for Bert (whose absence is cursorily addressed). That’s not necessarily a bad thing, and Miranda throws his all into the role, but the only thing that really differentiates him is a subplot involving a possible romance between him and Jane Banks that goes nowhere. Ben Whishaw is well suited to the role of a jaded grown-up Michael Banks, but his arc here is essentially just a less effective retread of his father’s from the first movie, lacking the impact of that character growth because Michael isn’t coming from as disparate and bitter a place as Mr. Banks. Emily Mortimer’s Jane feels like an afterthought, with her labour activism serving as a limp replacement for her mother’s equal rights campaigning and has nothing to do with anything. In terms of the children, they are at least a little more distinct than Michael and Jane in the original, but they’re not exactly brilliant characters either. The film hints at this dynamic where Annabel and John (Pixie Davies and Nathanael Saleh) have been forced to mature too early that kind of gets dropped, whilst Joel Dawson’s Georgie is so naïve and irresponsible to such a degree I thought they were going to reveal he was on the autism spectrum or something; that actually might have been an interesting development, but the film never goes there.

Julie Walters is also great but very underused as housekeeper Ellen, and there’s even a few cheeky on-screen and vocal cameos for the cinephile to spot; some obvious, some less so. But the performances that most certainly don’t fly are those by Meryl Streep and Colin Firth. Streep’s role as fix-it shop owner Topsy takes the cake as the most unnecessary sidestep the film takes, with her plot thread literally never resolved and her character never coming back into play, and her performance is just an Eastern European stereotype so broad it makes Van Dyke look like a born-and-bred Londoner. Firth meanwhile is saddled with possibly the flattest villain I’ve seen in a modern film as bank president Wilkins. There’s no attempt at ambiguity or nuance to the character in any facet; he’s just a greedy cheating bad guy who wants to destroy the Banks family because…money? It’s a role that is not only incredibly trite and unimaginative, but completely misunderstands the point of the bank in Mary Poppins.

In terms of striking a balance between the traditional and the modern, Mary Poppins Returns fares better at doing so on a technical level than it does so with its story and characters. From the traditional opening credits to the dance choreography, it faithfully mirrors a lot the techniques from the first film and effectively updates many others. It could have done a better job at fusing certain aesthetic elements, as the film not only dabbles in live action and 2D animation but CGI elements as well; it might have been wiser if the film picked either old school or new school instead of mixing both. But what everyone really wants to know is whether any of the new songs are good, and much like the rest of the film it’s an incredibly mixed bag. Mary Poppins has some of the most iconic songs in film history in its repertoire, but nearly every song on Returns’ soundtrack is just a rehash those old tunes. The best is probably “A Cover is Not a Book”, the film’s equivalent to “Supercalifragilisticexpialidocious”, though I do question to choice to have Miranda rap in it (guys, I know he was great in Hamilton and all, but just because he can rap really well, doesn’t mean he should here). “The Place Where Lost Things Go” is a sweet little melody but is just an amalgam of “Stay Awake” and “Feed the Birds”, “Trip a Little Light Fantastic” is a fantastic choreography showcase but is near-identical to “Step in Time”, whilst “Lovely London Sky” is a very promising opener but it’s no “Chim Chim Cher-ee”. The most original song is “A Conversation”, a quiet little ballad where Michael sings to his deceased wife, but it’s a mere fleeting moment of originality. The absolute worst is “Turning Turtle”, Streep’s song that serves as the film’s “I Love to Laugh”…or at least I think that’s what it’s supposed to be. Frankly, the song was so forgettable and uninteresting that I can’t even hum a single melody from it.

Mary Poppins Returns was never going to rival the original film, and it ultimately falters because it simply tries too hard in all the wrong places. It feels like the result of too many cooks in the kitchen; some of them are trying their best to reverse-engineer its predecessor, whilst others misunderstand what made the first film work to begin with. Blunt’s lead performance is effortlessly charismatic and most of the songs are at least enjoyable in the moment, but I’m all but certain this one won’t stand anywhere near the test of time Mary Poppins has for over fifty years. That film remains timeless because it touches on universal themes and speaks to all generations, and all Returns can do is parrot those same ideas. If you are in the mood for a whimsical family picture this holiday season, you’d be much better off watching the Paddington movies again at home instead. Those honestly capture the appeal and heart of the original Poppins better than yet another example of Disney brand management.