Wreck-It Ralph was a welcome surprise back in 2012, delivering a solid family adventure wrapped in cute video game references and a sweet message. It showed Disney had some versatility at the beginning of its second renaissance to do more than just riffs on the fairy tale princess formula, and of all of their films it was the one that most actively called for a sequel. One of the main problems of the first film was that it built a fascinating story world with a lot of possibilities, but only focused on a small corner of it. For Ralph Breaks the Internet, they’ve expanded the world out even more to include the World Wide Web. However, this time around they’ve proportionally covered about the same amount of ground. 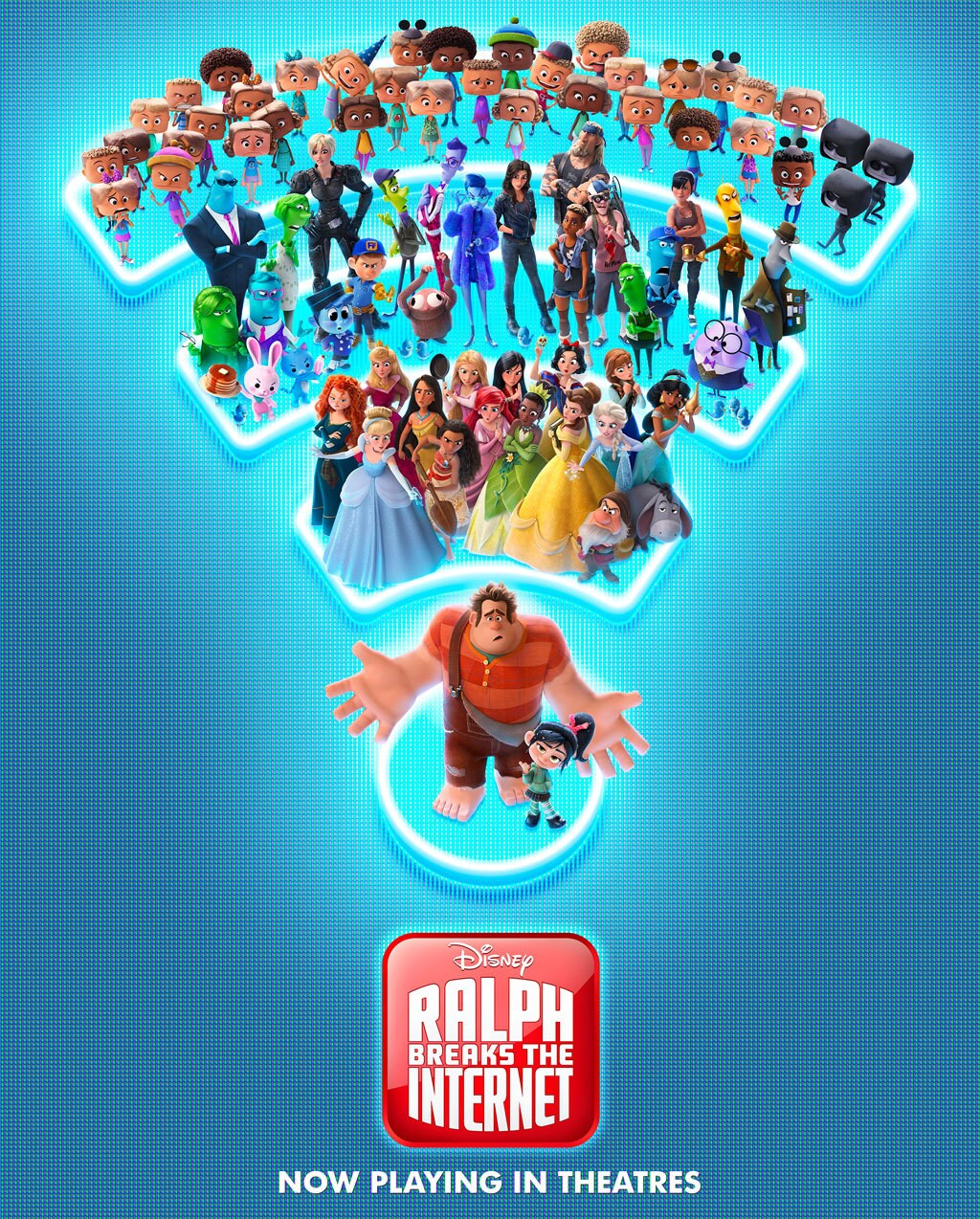 Ralph Breaks the Internet immediately makes the first trap a sequel can easily fall into: following the formula of the original too closely. A lot of the individual details are drastically different, but in the broad strokes it is structurally identical, with the only real deviation being the lack of subplots. The story this time around is focused squarely on the relationship between Ralph and Vanellope, with all the supporting characters from last time practically relegated to extended cameos (the film sets up a side-story for Fix-It Felix and Calhoun, but it’s immediately forgotten about and only resolved in the end with an admittedly funny misdirect). Keeping the focus on our leads is not necessarily a bad thing, but too much of the ground covered here echoes what we’ve already seen, but even with a narrower character focus the story still feels a little scatterbrained. Goals and motivations completely switch several times throughout, plot threads are dropped suddenly and picked up again just as abruptly, all within a story world that somehow feels simultaneously overbearing yet barely touched upon. Even so, that doesn’t mean the film is a complete bust; far from it. The pacing is airtight and keeps the story flowing at all times, the humour is well-judged and arguably funnier than the first, there’s a surprising amount of depth to the film’s commentary on internet culture, and the film’s themes of overcoming co-dependence and allegories to mental health and disability are much needed in today’s climate. It’s just unfortunate that all of these great individual pieces aren’t presented in a more cohesive package.

John C. Reilly is one of the most underrated actors working today, and as Ralph he is again an incredibly charming lead. He knows how to deliver a punch line and portray the character as a lovable doofus without making him too idiotic, and they thankfully haven’t suddenly reverted his personality back to his persona in the first film. That being said, the plot keeps pushing him back into that place of insecurity he was in last time around, instead swapping out existential worry about his morality for a fear of being left behind by his best friend. He’s inconsistent in his behaviour, mistrusting an affable fellow game character yet trusting a virus-peddling pop-up advertiser and the literal embodiment of the YouTube algorithm, and that often makes his rash decisions not sit well. Sarah Silverman’s Vanellope is similarly handled, with her motivations tweaked from wanting to be a part of her game to wanting to be a part of a different game (so totally different!), and her evolving relationship with Ralph is pushed more by plot necessity rather than natural character development.

As previously mentioned, Jack McBrayer’s Felix and Jane Lynch’s Calhoun are almost nowhere to be seen this time around, and their dynamic is severely missed as both a break from the Ralph & Vanellope story and as an all-around adorable mismatched couple. Instead, the film is focused on new faces both original and IP-derived. Gal Gadot brings her natural charisma to the role of Shank, but the character lacks a distinct personality separate from her actor’s real-life persona; it would have been refreshing to see Gadot tackle a more outrageous and disparate-from-herself character. Taraji P. Henson similarly carries her character Yesss with her own personality, but despite the interesting concept of her character she feels a little underutilised, shifting from important supporting player in the second act to just an interchangeable ally in the third. There are some fun little turns as bit characters from the likes of Alan Tudyk, Alfred Molina and Bill Hader, and the film is chockfull of cameos from internet personalities, but the real draw here are the Disney Princesses. Voiced almost entirely by their original voice actors, their roles in the story are mostly incidental but all of their scenes are fantastic and filled with some cute deconstructionist humour. If Disney was able to greenlight an animated sitcom just about all the princesses hanging out together, I would totally watch that.

Some have noted a visual similarity between this film and last year’s The Emoji Movie, and whilst the comparison isn’t completely without merit this film tackles the idea with a lot more smarts. Sure, setting the film on the internet opens up the opportunity for the film to just be one giant advertisement and Disney more than takes advantage of that to shill their brand and others, but beyond the corporate synergy the story world itself is well-imagined and visually appealing; essentially, the same high attention to detail you’d expect from the House of Mouse. Also worthy of mention is the film’s original song “A Place Called Slaughter Race”, an amusing pastiche of Disney “I want” songs so evocative of Alan Menken’s legendary work for the studio that it should be no surprise that Alan Menken actually wrote the damn thing!

Ralph Breaks the Internet is an amusing distraction whilst it lasts, but it’s not going to stick with you past the initial viewing the way the first film does. There are brilliant individual moments of inspiration here that surpass anything done in Wreck-It Ralph, but for the most part it’s just a remastering of the first film. There was so much more opportunity to innovate and explore new corners of the video game world, and as smart as some of the criticism of Internet culture is it distracts from what Wreck-It Ralph was about to begin with. Maybe if this concept of a Disney adventure through the Information Superhighway had been imagined as a new property rather than a sequel to an existing one, it could have stood better on its own two feet. As is, it’s essentially just a better-made version of the old straight-to-video Disney sequels.

P.S. Make sure you stay through the initial credits for one of the most meta mid-credits scenes ever, though I doubt it’s a joke that’ll age well because it relies on your prior knowledge of the film’s marketing