In the age of cinematic superheroes, it seems like every studio has attempted to latch onto any intellectual property with even the vaguest similarities to comic book heroism, slap on the style and tropes of whatever are the most popular blockbuster motifs of the day, and call it a “reimagining”. We’ve seen this happen to the likes of King Arthur and Dracula, so it was only a matter of time before Robin Hood got the same treatment. In all fairness, Hood as a character better lends himself to the superhero mood than most, being an obvious point of inspiration for the likes of Batman and Green Arrow. But this new Robin Hood has far bigger problems than just being another movie chasing the Marvel train. No, it’s bad for reasons far beyond that. 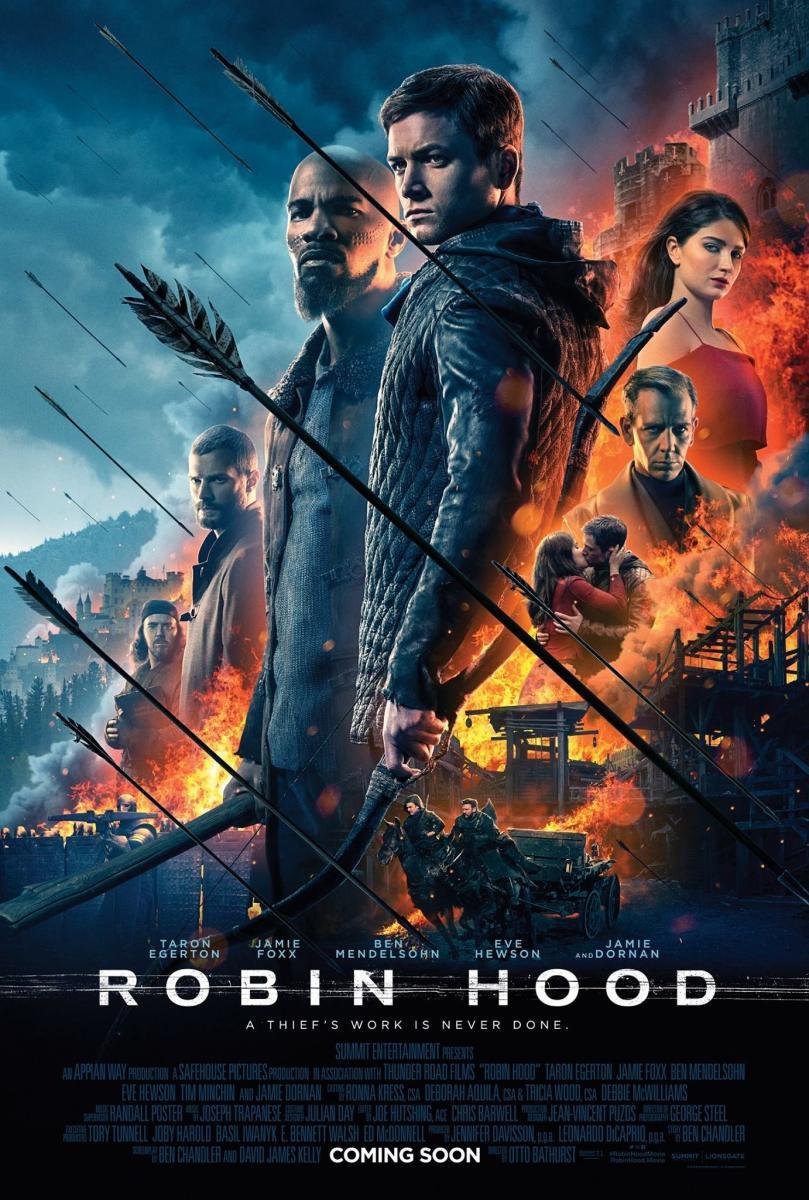 Now the story of Robin of Locksley has been brought to us many times over since the dawn of cinema itself, so this new version already has a lot to tackle in regards to differentiating and comparing itself to nearly a hundred years worth of adaptations. The tack it decides to take is filling the film with some of the most blatant and unsubtle allegories imaginable. It’s no secret that some see Robin Hood as something of a revolutionary symbol in this age of financial inequality, but the film goes overboard to the point that it makes mother!‘s allegories seem subtle in comparison. Hey, ever thought that the war in the Middle East has some overlap with the Crusades, or that political and religious corruption has been a problem forever and not just a recent phenomenon? Yeah, no sh*t, but this movie seems to think these are new ideas and is a little too eager to make the paralleled clear.

The result is a film that indulges so much in trying to create an identity that it completely loses track of what it’s trying to be. At the most basic level, the film is just a ripoff of Batman Begins, but at the same time it’s lifting ideas wholesale from the likes of Gladiator, Black Hawk Down, 300, The Hunger Games and more, and none of it is done subtly. The storytelling is incredibly efficient but never gives enough time for development, leaving the characters to be defined solely by what we know about them from pop culture osmosis and whatever one or two “see, they’re edgy and hip now” quirks the filmmakers have given them. The plot is formulaic from beginning to end, at least until one final twist involving a whiplash-inducing character flip that also doubles as a Marvel-style teaser for the next movie, and by the point they’re just running over a dog they’ve already beaten to death. In short, it’s somewhat ironic that this film takes on the image of our current revolutionary movements, because under the skin it’s just a piece of lazy IP management made to try and pander to the masses and make a quick buck.

Taron Egerton showed great promise when he jumped into mainstream attention in Kingsman and he’s proven himself time and again since then. However as Robin Hood (or Rob as they keep calling him) he fails to make a good impression. He feels phenomenally miscast in a film where every performance already feels like they come from completely different movies, delivering a Robin Hood who is never particularly charming, intimidating or relatable. The script doesn’t help much, with the character on the page basically just being Bruce Wayne without the bat fetish, but Egerton fails to elevate the material in any notable way. Jamie Foxx’s performance as the film’s reinterpretation of Little John (who’s basically just Azeem from Prince of Thieves but now called “John”) is nearly as ridiculous as his role in The Amazing Spider-Man 2, over-delivering every line with a husky voice and forced inflection, and on reflection is far more of a proactive presence in the plot; seriously, John pretty much calls all the shots for the first and second acts and Rob just goes along with him.

Ben Mendelsohn makes for a serviceable but ultimately forgettable Sheriff of Nottingham, whilst Eve Hewson shows some promise as Maid Marian but the film quickly squanders that potential by giving her very little to do. Tim Minchin’s Friar Tuck feels like he’d be more at home in Mel Brooks’ Men in Tights, Paul Anderson’s Guy of Gisborne seems to think he’s in a Saturday morning cartoon, and for some reason they’ve set up F. Murray Abraham as The Cardinal like he’s supposed to be the Thanos of this series. However, the most confusing character is easily Jamie Dornan’s Will Scarlet. Starting off, he barely resembles the traditional character to begin with, but there is at least something interesting to him as a parallel to modern progressive politicians trying to play fair in a broken system. But come the third act, the character goes through that aforementioned whiplash flip, and the results are more confusing and hilarious than shocking. I certainly didn’t see it coming, but that’s only because it doesn’t really make much sense.

Just like how Venom recently brought back the aesthetics of bad mid-2000s superhero movies, Robin Hood still seems to think 300 is the height of coolness. Every action sequence in this film is a mess full of shaky-cam, close-ups, bad compositing, incoherent editing, and an overuse of speed-ramping effects; I’d thought we’d finally killed that trick in 2014. From a design level, the film is clearly trying to go for a timeless look by mixing and matching medieval design with modern elements, but it only looks cool in the same way certain things are cool to a 14-year-old boy. This is a film that features crossbows that fire like semi-automatic weapons and knights wielding riot shields and batons. If that doesn’t make you understand why this film is a bad idea, maybe this is something you’d actually enjoy. Also, just a really random note, but this film has a massive hard-on for jets of fire; I counted nearly a dozen going off in just one short scene.

Robin Hood is a microcosm of every bad idea Hollywood has ever had in trying to make an old property seem “hip for the kids”. It plays like a fan fiction written by an edgelord teen who’s seen The Dark Knight too many times and who knows what Anonymous is but doesn’t understand it. The film takes a story filled with classic tropes and just tacks on modern ones, the characters are flat and are either underacted or overacted, and every aesthetic choice made in direction and design feels a decade out of date. When is Hollywood going to learn that you can’t just repurpose classic stories like this and expect us to see them? Ridley Scott released his failed “reimagining” of Robin Hood just eight years ago and it didn’t work, so why did anyone expect this to play? Seriously, I hope the next time someone decides to make a Robin Hood movie, it’s because they actually have a really good idea for one and not just because some studio executive has a lack of imagination.