What is there even left to say about the Transformers franchise at this point? Every flaw that could be pointed out has been highlighted again and again for ten years now. I could pretty much just copy and paste my review of Age of Extinction here and it would still be a generally accurate summary of The Last Knight. I can’t even say I had any optimism going into this one, and for that I can say I at least wasn’t as surprised by how bad it is. I was just bored, exhausted, and in awe of how such a film can even be made in the current cinema landscape. 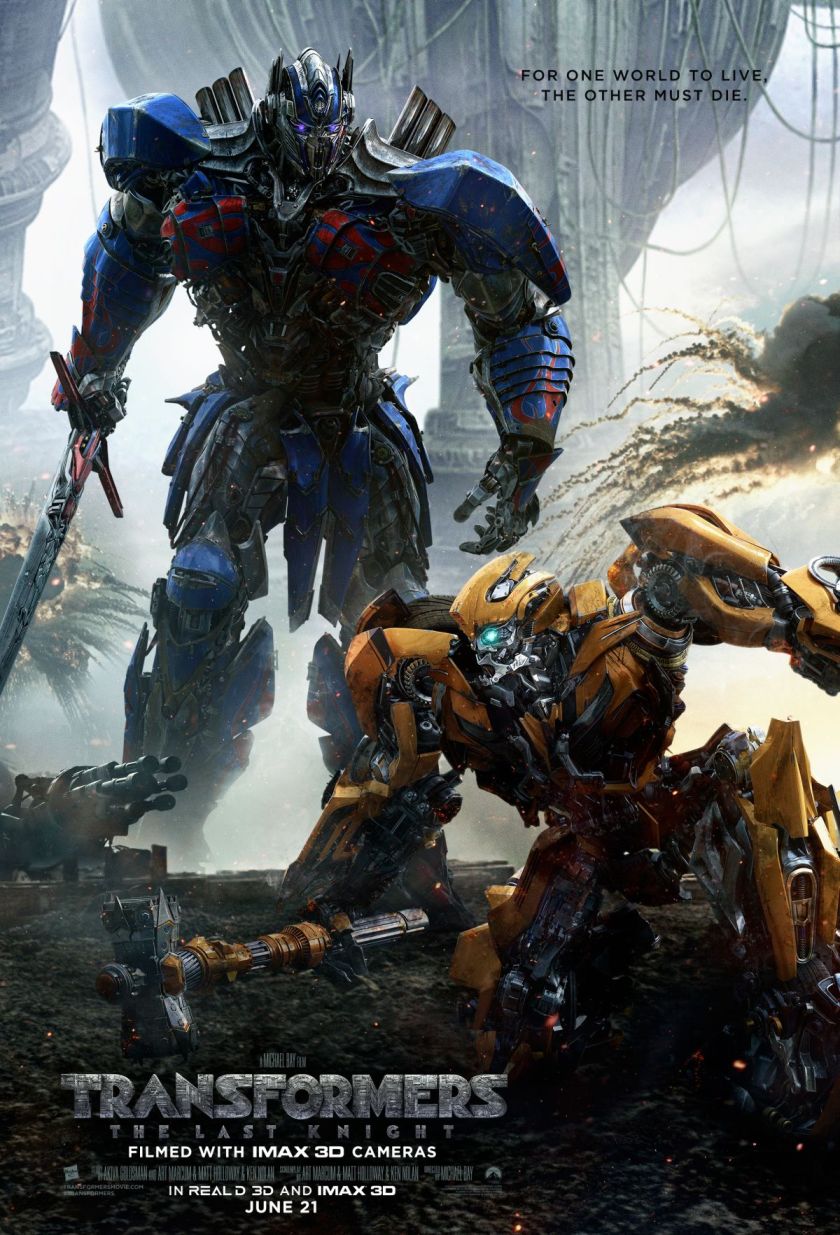 Five films in, and they still somehow can’t come up with a new plot for a Transformers film. Once again, there’s some artefact from Cybertron hidden on Earth that the Decepticons want to use to destroy the world and only the humans and Autobots can stop them. There is nothing new here at all, and what the film thinks are new twists are just wholesale ripped off from the previous films. The movie may be the shortest and have the fastest pace of all the films since the first, but that’s mainly because it has the shortest attention span of all of them. The aborted hodgepodge of a plot races from scene to scene like an eight-year-old on a sugar high, blurting out exposition and throwing around action sequences without ever once stopping to realize nothing it is saying or doing makes any sense. If I were to describe exactly what happened in this movie to you without a shred of irony, I would sound like a delusional, conspiracy-believing mental patient. The humour may be less insensitive than usual but it’s still embarrassing to sit through, and though the product placement isn’t as torrential as before it’s still plainly obvious when it’s there. The film lacks any cohesive flow or an emotional core to latch onto, once again being nothing but two and a half hours of nothing but mindless spectacle. It boggles the mind that after this long, these films still can’t even follow the basics of narrative storytelling; you know, the kinds of things most stories have without even having to think about.

Mark Wahlberg’s performance in Age of Extinction was laughable, but at least it had this frantic sense of energy to it. Here, he just looks absolutely bored the entire time and doesn’t share an iota of chemistry with the rest of the cast; I can’t believe I’m pining for the days when he was shouting insults at his daughter’s boyfriend. Laura Haddock is probably the most respectable female lead the franchise has had, but that doesn’t mean she’s a particularly well-written character or that Bay doesn’t objectify her at every opportunity; even her comebacks to sexist remarks come off as kind of sexist. Isabela Moner is a decent new addition but the film pretty much forgets about her after spending the first act setting her up, then constantly strains to find ways to keep her relevant when the easy solution would be just to cut her character; the same sentiments go to Jerrod Carmichael. Josh Duhamel and John Turturro return from the original trilogy but both are pretty thankless roles, whilst Stanley Tucci is back but playing a completely different character. Why? Was there supposed to be some kind of connection between his character here and in the last movie? And then there’s Anthony Hopkins, who has somehow found a way to embarrass himself more than any other of his paycheck performances. The film is almost worth seeing just to behold how certifiable disturbed his performance is. You have not witnessed a career sh*t its own pants like this until you see Hopkins say, without any sarcasm, “That’s one bitchin’ ride!”

Oh yeah, and the Transformers are in this movie, I guess. Optimus Prime is barely even in it, with only a few scant scenes in the beginning before showing up in the climax, and that whole “Prime is now evil” thing all the marketing was about is resolved pretty quickly and conveniently. Bumblebee’s whole arc here is about getting his voice back (which is something he actually did at the end of the first movie which they then swept under the rug in the following sequels), and they reveal all this backstory for him to ostensibly set up his spin-off next year. The rest of the Autobots are pretty pointless, with the introduction of a fan favourite like Hot Rod being made a big deal of and then he never does anything again. The Decepticons don’t fair much better. Megatron is back to his old self with no explanation, as is Barricade, and all of the new minions are a bunch of gangsta stereotypes with literal gold chains and no personality. Hopkins has a sociopathic robot sidekick called Cogman who gets annoying really fast, and the main villain Quintessa is as vague an antagonist as her name is stupid: very.

Do I even need to explain Michael Bay’s directing aesthetic again? Everything’s pretty much business as usual. The cinematography is saturated to infinity and can’t focus on anything for more than a few seconds, the production design is overwrought and inconsistent, and the editing feels like a six-year-old playing with a pair of scissors did it in an afternoon. But adding to the usual sensory overload is a new visual quirk for Mr. Bay: constantly changing aspect ratios! Sections of the film were shot with IMAX cameras but, instead of just shooting a few select sequences in the formant and using normal cameras for the rest, the film frequently flits between three different aspect ratios, often in the middle of a scene; a simple conversation between two characters can have each character presented in a completely different shot ratio. It’s constantly distracting and makes no logical sense, and why they couldn’t just make a 2.35:1 version for regular theatres is baffling. When the only good technical aspect of the film I can think of is the few times Steve Jablonksy recycles music from the first movie made me ever so slightly nostalgic for 2007, there’s something seriously wrong.

Transformers: The Last Knight is a terrible movie, but you probably didn’t need me to tell you that. What gives it its unique badness is just how banally insane it is. No other movie would get away with being this idiotic, sophomoric and lewd, but we always just throw up our hands and say, “Well, that’s Michael Bay for you.” That’s not good enough. I am willing to play devil’s advocate and say that Bay is far from being an untalented hack. He clearly has a distinct visual style, as well as a strong understanding of film language, and his films have had a huge impact on many aspects of modern blockbuster production. But he has also constantly shown an indifference towards his audience and a willingness to put as little mental effort into his work because he makes money either way. No one else can get away with that kind of arrogance in this business without astounding critical acclaim to back it up. Bay has said this is his last film in the franchise, but he said that after the last two movies as well. If he really means it this time, that’s fantastic. This is an opportunity to make something decent that doesn’t have to be smart, but can at least not insult my senses; if Transformers movies were at least as good as the recent Fast& Furious movies, I’d be satisfied. But if Bay comes back once again for whatever reason, then all we can do is perpetually wait for the general public to finally get bored of him.