In this landscape of remakes and reboots, a new version of The Magnificent Seven honestly isn’t such a bad idea. The original 1960 classic is itself a westernised retelling of Akira Kurosawa’s masterpiece Seven Samurai, and there’s plenty to improve on considering the dated and somewhat un-PC elements of the original film. For this new version, Antoine Fuqua has taken what worked best about both previous versions and given it a modern polish, making for a movie that isn’t necessarily better than either incarnation but is a solid and entertaining western shoot-em-up in its own right. 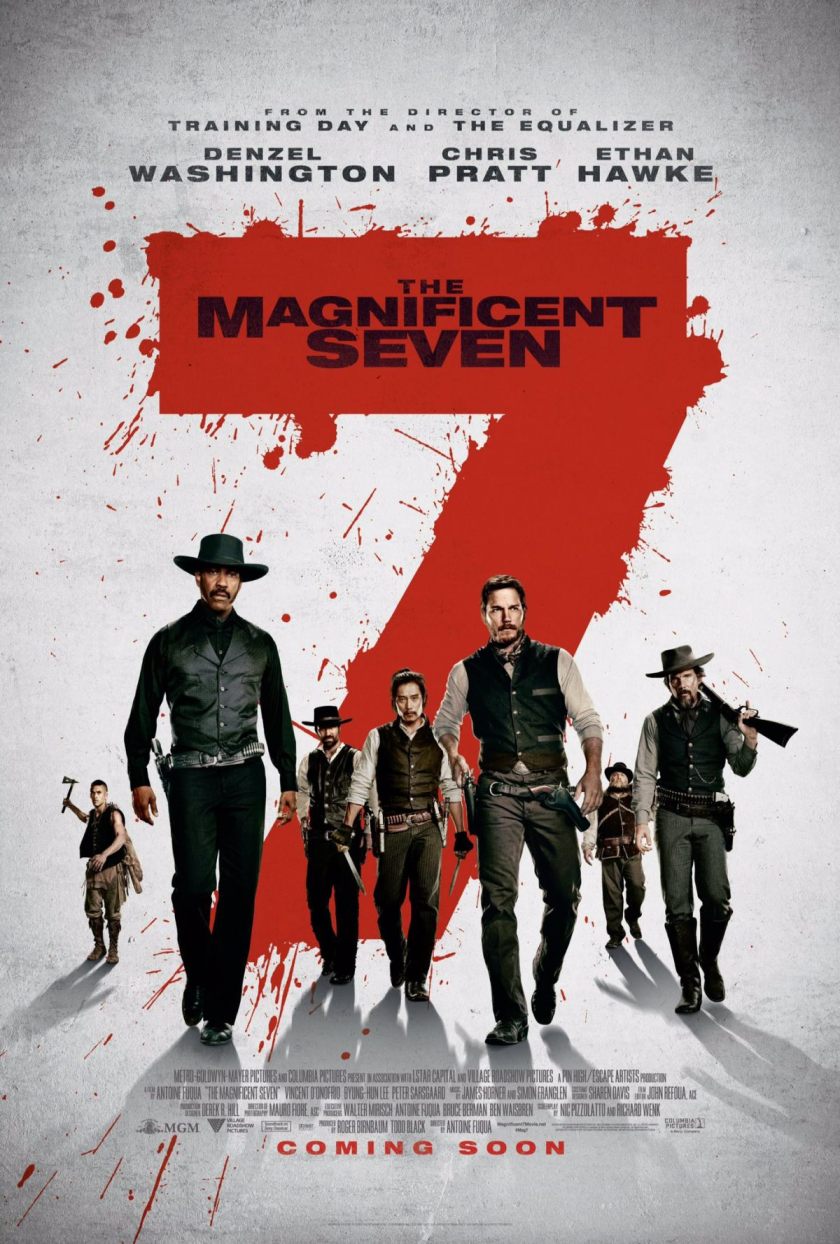 The basic premise of a town under threat and the band of heroes assembled to protect it stays pretty much the same, but a lot has been done to update the story for a modern audience. Instead of violent bandits oppressing the town, we have a tyrannical tycoon taking it over. Rather than merely raiding it for supplies, our villain Bogue (Sarsgaard) has complicated motives regarding the relationship between capitalism and God, which also helps give the film greater themes than just “being mean is bad, and teamwork is good”. But most importantly, our titular group is a far more diverse bunch both in terms of skill set and ethnicity (which is refreshingly not made a big deal about). The story certainly has its sombre and emotional moments but it doesn’t take itself too seriously, often feeling tonally closer to a Marvel movie than a classic western, but it’s a welcome take on the genre and for Fuqua’s usually po-faced filmmaking in general. The pacing does lull a bit in the middle as we venture into the typical recruiting of the team, but it does give us time to get to know these characters and only further builds anticipation for the inevitable confrontation. There’s only a few small action beats sprinkled through the first two thirds of the film, all of which are well executed, but once the third act kicks in the movie explodes into a bonanza of gunfire. There is not a moment wasted in the entire sequence, making for an action extravaganza on par with some of the best set pieces of the year so far.

The original Magnificent Seven consisted of some of the manliest men in Hollywood at the time such as Yul Brynner, Steve McQueen, Charles Bronson, Robert Vaughn and James Coburn, and the new team equally reflects today’s perception of the action hero. Denzel Washington once again teams with Fuqua to deliver a typically Denzel performance, stepping into the equivalent shoes of Brynner and making for the perfect leader of this team. Similarly, Chris Pratt is allowed to do what he does best as the wisecracking Farraday and his performance and chemistry with Washington helps keep the film consistently lively. The rest of the Seven don’t get quite as much focus as Washington or Pratt, but they all manage to leave an impression with what they have. Ethan Hawke initially seems perfunctory but is given some depth with his morality regarding violence, and his buddy relationship with the badass Byung-hun Lee further adds to the team dynamic. Manuel Garcia-Rulfo brings some grit as the outlaw of the team, with the back-and-forth between him and Pratt adding more humour, and Martin Sensmeier’s turn as the quiet Comanche warrior Red Harvest is small but memorable. Vincent D’Onofrio pretty much steals every moment he gets as the gentle giant Jack Horne, flitting from reserved mountain man to brutalising berserker at the drop of a hat without losing any of his likability. Rounding out the cast is Haley Bennett as instigator of the team Emma Cullen, who quickly proves herself a character worthy enough to perhaps join this band in the future, and though Peter Sarsgaard’s Bogue is hardly the most nuanced villain he does drench the character with as much slime as he can to make him truly despicable.

As previously mentioned, the action on display in this new Magnificent Seven is easily its biggest draw and what makes it so entertaining once the bullets start flying. Fuqua’s ability to direct action has certainly only gotten better since efforts like Olympus Has Fallen and The Equalizer, but even with the restriction of a PG-13/12A rating he manages to keep it just as brutal. The cinematography and editing practically morph whenever the mood changes; most of the movie has the look and tempo of a classic western, but it quickly adapts to a modern action feel with little jarring effect. The music is also wonderful, not only for featuring the iconic theme song but it also has the sad of honour of being the late James Horner’s final score. His compositions, completed with the assistance of frequent collaborator Simon Franglen, feature all of Horner’s trademarks and acts as a beautiful swansong to one of the great composers of our time.

The Magnificent Seven doesn’t change the game in regards to remakes of classics or the place of westerns in the modern cinema landscape, but it’s certainly an entertaining time at the movies. It captures the spirit of the original whilst not being overly reverent to it and mostly does its own thing, which is exactly what a great remake should do. The cast is an overall success, the story remains as timeless as ever but updated just enough to modern taste, and the action never lets up once it starts. Whether this is the start of a new franchise or just a one-off tribute to the original, it’s something definitely worth checking out whether you love old school westerns, modern action or, most ideally, both.