Up front, I just need to make it clear that I am a massive fan of Ghostbusters. It has been one of my favourite films since I first saw it when I was six years old. I love the movies, I love the cartoons, I love the toys, and nothing brings me more joy than when I can find an excuse to quote the movie in everyday conversation. But ever since it was announced Ghostbusters was getting a reboot, the Internet has been in uproar not only because of the usual childhood sodomising claims, but because the filmmakers had the audacity to make the titular group of paranormal investigators all female. All of this at first could easily be blown off as the usual sexist Internet trolls blowing things out of proportion, but then that first trailer came out and all hell broke loose. Suddenly, this new Ghostbusters became a marketing nightmare and even anyone with any legitimate criticism unfortunately became associated with the aforementioned trolls. But now that the film is finally available to the public and I have witnessed it, I have a very strong urge to break composure and address the naysayers with some colourful language, but I’m going to remain civil and simply say I liked this movie. Quite a bit, actually. Here’s why. 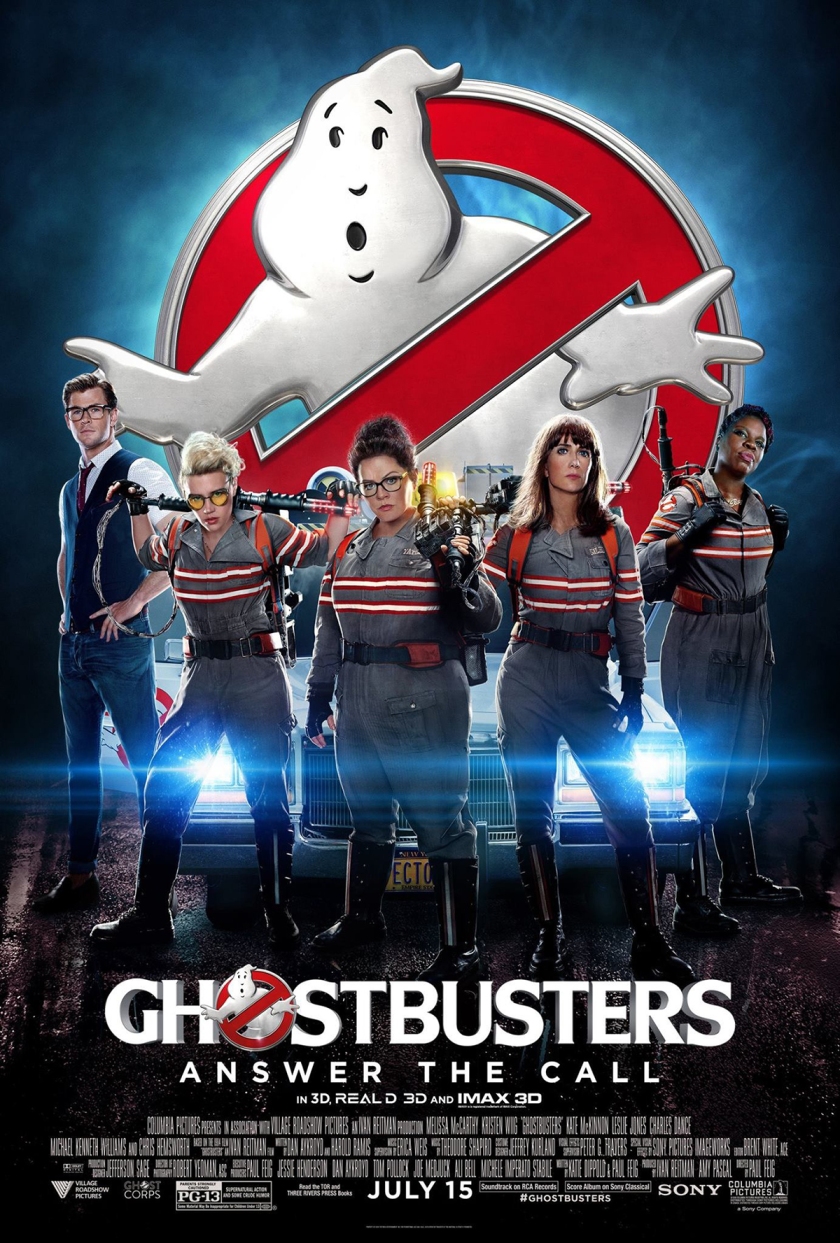 In describing the new Ghostbusters, the key phrase I’d use is “similar, but different.” The film is structurally comparable to the original, especially in the first half as our heroes discover the presence of ghosts and set up their business to fight back against them. You’ve got the university dismissing the Ghostbusters for their preposterous findings, accusations that they are actually frauds causing these apparitions for monetary gain, the slow discovery that the spike of paranormal activity is leading to an apocalyptic event, and government figures who ignore their findings in the face of this crisis. But to call this film a rehash of the original is like calling The Force Awakens a rip-off of A New Hope: it’s clearly intentional. From that basic template, this new Ghostbusters takes the series in a different direction and that is mainly done through having its own unique voice. It takes the core concept of the franchise and injects it with Paul Feig’s outlook and sensibilities, creating a film that certainly respects its source material but also wants to do things its own way. With that, the sense of humour is definitely more akin to his movies than the Ivan Reitman originals or similar films of that era and genre. The jokes are a lot faster and cruder, full of more adlibs and asides, than the more sarcastic and absurdist comedy that fuelled the original. But the key thing you’re all concerned about is far simpler: is it funny? That’s hard to judge because everyone’s funny bone is tickled differently, but for me I can happily say I laughed consistently throughout the entire runtime. Sure, not every joke hits, with most of the duds being the ones they used in the trailers (seriously, was Sony’s marketing department trying to make this movie look bad?), but enough of them do that it keeps the movie consistently entertaining. The movie does begin to outstay its welcome as it reaches its third act, especially given the slightly bloated two-hour runtime, and the many different pieces of fan service vary from chuckle-worthy to cloying, but none of that is enough to stop the movie from being a fun, entertaining ride.

Recapturing the magic of the original Ghostbusters cast is something you just can’t do, and so again the filmmakers have done something different with their new batch of heroes and I’m not just talking about their lack of Y-chromosomes. There are definitely elements of those original characters in the new team, with Melissa McCarthy’s Abby having an enthusiasm for her work comparable to Ray and Kate McKinnon’s Holtzmann being an awkward introvert genius in the vein of Egon, but these are otherwise original, funny and likable characters that stand apart from their masculine predecessors. In many facets these comediennes are just playing exaggerated versions of their real-life personas, but no more so than Bill Murray, Dan Aykroyd, Harold Ramis and Ernie Hudson were. Kristen Wiig’s Erin is certainly the most unique of the group, coming into this situation with more trepidation than excitement, and her inner conflict as she tries to find that balance between respectable scientist and paranormal geek makes her a deeper character and a great role model for those fighting against their own quirks in an attempt to be “normal”. McCarthy, as she did in Spy, thankfully uses her usual abrasive persona sparingly for comic effect rather than just being a walking trove of colourful insults, and her relationship with Wiig gives a strong emotional core to the story as two friends driven apart by conflicting priorities. Leslie Jones’ Patty makes for a good grounding presence as the layman of the group who honestly gets more character development in this one movie than Winston ever did in both of the originals, but I do think she will be a divisive presence; if you already don’t like Jones’ sense of humour, this won’t change your mind. But the breakout MVP of the main cast is most certainly McKinnon, finally putting her Saturday Night Live chops to good use and stealing every frame of film she appears on. She’s a hilarious wildcard of a character, with nothing that comes out of her mouth being predictable or sane. Seriously, if nothing else, I hope she at least gets some more shots at the big leagues because she bloody deserves it.

The supporting cast in comparison, however, feels a little undercooked. Neil Casey’s scheming Rowan does bring to mind Peter MacNicol’s Janosz from Ghostbusters II, but unfortunately not only is he not a particularly original character but he lacks development. It’s a real shame because there is a lot of potential with his character and towards the end he does start to become more interesting and even funny, but eventually it just devolves into another “blast the ghost” finale. Andy Garcia and Cecily Strong have some funny moments as the Mayor of New York and his conniving assistant respectively, especially in how confusedly they try to deny the existence of paranormal phenomena despite the obviousness, but they come into the story a bit too late to be effective. Michael K. Williams and Matt Walsh are basically just glorified extras with nothing particularly interesting to do, Charles Dance is funny whilst he’s there but is never seen again after his two scenes, and the various cameos from the original cast members are mostly just throwaway gags. Nevertheless, the salvation of the supporting cast comes from the most unlikely of places, and that is the simple but elegant brilliance of Chris Hemsworth’s Kevin. His entire shtick stems from the simple joke of “he’s an idiot”, and the sheer lunacy of how far his stupidity goes never ceases to get a laugh. Even when other jokes fall flat, you can always count of Kevin to get that smile back on your face.

The “similar, but different” approach the film takes also applies to the film on a technical level, appropriating many of the visuals of its source but repurposing them and giving them a new twist along with some welcome additions. The redesigns of elements like the jumpsuits, the proton packs and the Ecto-1 are ultimately harmless changes, but the new tech the film adds some much needed variety to the actual busting of ghosts and gives the action something a little more panache than just a bunch of guys standing still and firing lasers. The ghost designs are perfectly fine and match up well to the style of the original films, though I do wish there were more practical elements to the ghost effects instead of the full CG blowout. However, the effects themselves never seem unconvincing and for the most part fit in well with the more colourful tone of the film. The film’s overall look is far brighter and slicker than its forbearers, but it’s a shift in aesthetic than is again more fitting to the film’s tone. Theodore Sharpio’s score for the film is certainly nowhere near as iconic as Elmer Bernstein’s compositions for the original, but some of the pop music choices for the soundtrack are inspired. Oh, and for those who don’t like Fall Out Boy’s cover of the classic Ghostbusters theme (I’m kind of indifferent to it), don’t fret too much; it’s only used briefly in one montage scene and the Ray Parker Jr. original remains front and centre.

Let’s all face it: there was no way any new version of Ghostbusters could match up to the original. Remember, the core creative team tried to with Ghostbusters II and even they couldn’t manage it. It’s a unique lighting-in-a-bottle film that could not have worked at any other time, and expecting the same thing to happen again in completely different circumstances is pretty much insane. So the fact that this new Ghostbusters isn’t as good as the original is absolutely no shock to me, but the fact that it succeeds on its own terms does bring me a great deal of delight. It’s a film that is keenly aware of its legacy and wants to honour, but it also wants to do it on its own terms. It takes the premise of Ghostbusters and makes it its own, bringing a different sense of humour, a different cast of characters, and a different outlook on the world. The gender change to the main cast is absolutely the last thing wrong with this movie, and if there is any justice in this world their chemistry and humour will only inspire Hollywood to bring more casting diversity to Hollywood blockbusters. Will every fan of the franchise be pleased by the final result? Given the backlash before even a frame of footage was shot, I can unequivocally say no. But for anyone willing to accept the film for what it is trying to do rather than measuring it against a film it isn’t trying to be, then I’d say there’s a far stronger chance you’ll come out liking it. If you have even the slightest affection for Ghostbusters, you owe it to yourselves to go see the movie and decide for yourself. If you don’t like it, that’s perfectly fine with me as long as your opinion doesn’t completely stem from a preconceived place of hate.