Here’s a fun fact: the X-Men film franchise is now 16 years old. That’s twice as old as the Marvel Cinematic Universe so far. Since the first film came out in 2000, we’ve seen three different actors play Spider-Man, two Batmen, two Supermen, two Daredevils, three Punishers, and two Fantastic Four line-ups. Sure, the series has had its ups and downs and there’s been a few retcons along the way, but to see a film series stay alive this long whilst maintaining a semblance of continuity is unheard of. I believe that’s mainly down to how much source material there is to draw from, with decades of stories yet to be plundered that would make for awesome movies. Apocalypse finally gives us one of the X-Men’s biggest villains on screen, but is bigger necessarily better? 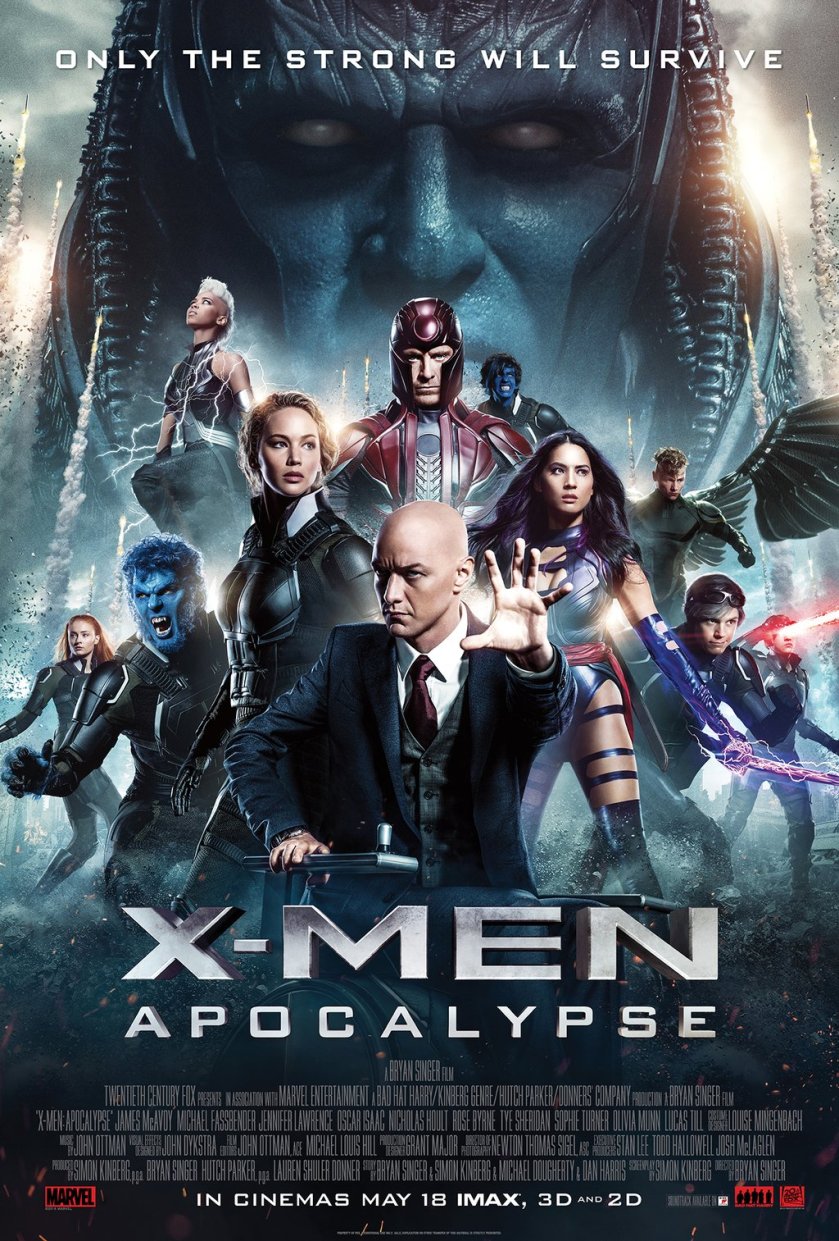 From a scale perspective, this is easily the largest X-Men film to date. There are more characters, more locations, and more stakes than ever. Whilst previous films focused on the socio-political struggle between humans and mutants with some action sequences thrown in, Apocalypse is basically a Roland Emmerich disaster movie with superpowers; landmarks are destroyed, the fate of humanity is at hand, and only the merry band of mutants can save the day. It really is a massive film, but that’s unfortunately its biggest downfall. There’s a lot of great stuff that both fans of the films and comic book aficionados are going to love, but there’s so much that a lot of it gets lost in the shuffle. It doesn’t suffer from a jumbled narrative the way Batman v Superman did, nor does it haphazardly throw characters and references for ill-conceived fan service like The Last Stand. Everything in the film from a story perspective works at least competently, but there’s rarely a moment to breathe in everything going on. The film flows well but it does drag on a bit, mainly thanks to some plot detours that could have been circumvented with a few minor changes. The story also suffers from a lot of logic issues given the large time gaps in between films (e.g. how can the teenage Cyclops and Havok be brothers when Havok was already an adult during First Class 20 years prior?). However, from a pure spectacle perspective, Apocalypse does deliver a lot of solid action and embraces the comic books more than ever in ways that I’m sure will please fans who’ve been less than impressed with its predecessors’ more grounded approach.

Whilst the movie doesn’t fully deliver on story, it makes up for a lot of it with its characters. This trilogy that began with First Class has always focused on the relationship between Professor X, Magento and Mystique, and their respective actors continue to excel in these now-iconic roles. Jame McAvoy fully completes his transformation into the Charles Xavier we know from the original films, shedding his boyish charm and becoming the inspirational leader we’ve all come to know. Michael Fassbender finds more hidden depths in Magneto as he struggles with his own conscience, resulting in easily the film’s most heart-wrenching moments, and Jennifer Lawrence’s Mystique continues to evolve as she comes to terms with her status as a hero in the mutant community after Days of Future Past. Evan Peters’ Quicksilver also returns in a much bigger role this time around after stealing the show last time, and not only is Peters still fantastic in the role they’ve somehow found a way to top his standout scene from the previous film. In terms of the new cast, the easy standouts are Sophie Turner, Tye Sheridan and Kodi Smit-McPhee as the younger versions of Jean Grey, Cyclops and Nightcrawler. Turner perfectly balances the line between fragility and power Grey has always laid on, Smit-McPhee brings some much needed humour to the proceedings, and they’ve not only finally given Cyclops screen time but they’ve also made him far less boring; it only took them five tries. Whenever the film finally takes a breather from the plot to develop character, it does so very well. Moments like Cyclops and Jean bonding over being outcasts or Mystique telling the younger X-Men about her experiences really add some much needed depth in between all of the carnage.

However, with a cast this massive there’s bound to be plenty of characters brushed over. Nicholas Hoult lacks anything meaningful to do this time around as Beast, and Rose Byrne’s Moira MacTaggart is only here to provide an exposition dump and wrap up a plotline from First Class. Some of the new characters also feel short changed; Alexandra Shipp gets a few moments to shine as Storm, but Olivia Munn’s Psylocke and Ben Hardy’s Angel have no real character and are really only there to look cool in action sequences. But the biggest disappointment is the titular villain Apocalypse himself. Oscar Isaac puts in a strong performance as the character and he’s certainly a worthy opponent on the battlefield, but he’s so all-powerful and beyond human emotion that he’s kind of uninteresting. He’s basically just an OP Magneto without the sympathetic back-story, and without that humanity his motivation ends up being nothing more than another bad guy with an Übermensch obsession.

Back in 2000, hardcore X-Men fans were upset that the film abandoned the traditional spandex costumes in favour of dull black leather; then again, these were mostly the same fans complaining about Hugh Jackman’s height. But over time the films have gradually seeded in more and more visual elements from the comics, and Apocalypse continues that trend even further. It’s still not quite 100% faithful in the way the MCU films are, but seeing Psylocke in a comics-accurate costume or Jean Grey use her powers to her full potential finally shows the stigma towards the source material’s more outlandish elements is fading away. After dealing with both the 60s and 70s in previous films, Apocalypse tackles the 1980s just as well with plenty of period detail in the set design and costumes; it also makes the film visually look even more like a Chris Claremont-era comic come to life. With all of the different powers on display amongst all of the wanton destruction, this is also easily the most effects-heavy X-Men film and the spectacle of it all certainly sells the scale. There are moments where it can become too busy with CGI, but then you get Quicksilver’s showstopper and you’ll forgive any slightly shoddy digital stand-in. John Ottman returns for his third stint as composer on the franchise, once again bringing back his awesome theme from X2 along with some new tunes that perfectly fit the film’s tone.

There’s a scene in X-Men: Apocalypse where several characters go to see Return of the Jedi and walk out debating which of the Star Wars movies is best. The argument comes to a close when Jean Grey says, “I think we can all agree the third is the worst.” Now this is probably meant as another stab in the gut for The Last Stand, but it unintentionally also works as a metaphor for this film in comparison to First Class and Days of Future Past. Apocalypse has a lot of great moments that rank amongst the best in the franchise’s history, but it doesn’t quite add up into a satisfying whole. It’s overstuffed with content, resulting in a lot of wasted potential and a lack of definition, but it’s entertaining to watch for sure and it further opens up the potential for this franchise to expand in exciting ways. But perhaps for the next instalment, taking a step back from the epic might be the best idea. Not every superhero movie needs to be about the end of the world, and the X-Men have always been better as allegorical commentary rather than visual spectacle. Let’s focus back on the characters, tell a simple story, and just let the X-Men be X-Men.