Bad Neighbours (or simply Neighbors in the US) was a surprise hit back in 2014, giving a fresh spin on the frat house comedy by humanising both sides of the conflict. It was a raunchy comedy that actually had something to say about the nature of maturity and the fleetingness of college party life, surprisingly resulting in one of Zac Efron’s best performances of his career. But now we have a sequel, and we all know how comedy sequels usually turn out; you can literally count all of the genuinely good ones on one hand. But Bad Neighbours 2 (AKA Neighbors 2: Sorority Rising) falls into a difficult position, because in many ways it does do some different and admirable things compared to the original, but in other ways it is still a lesser retread of the first film. 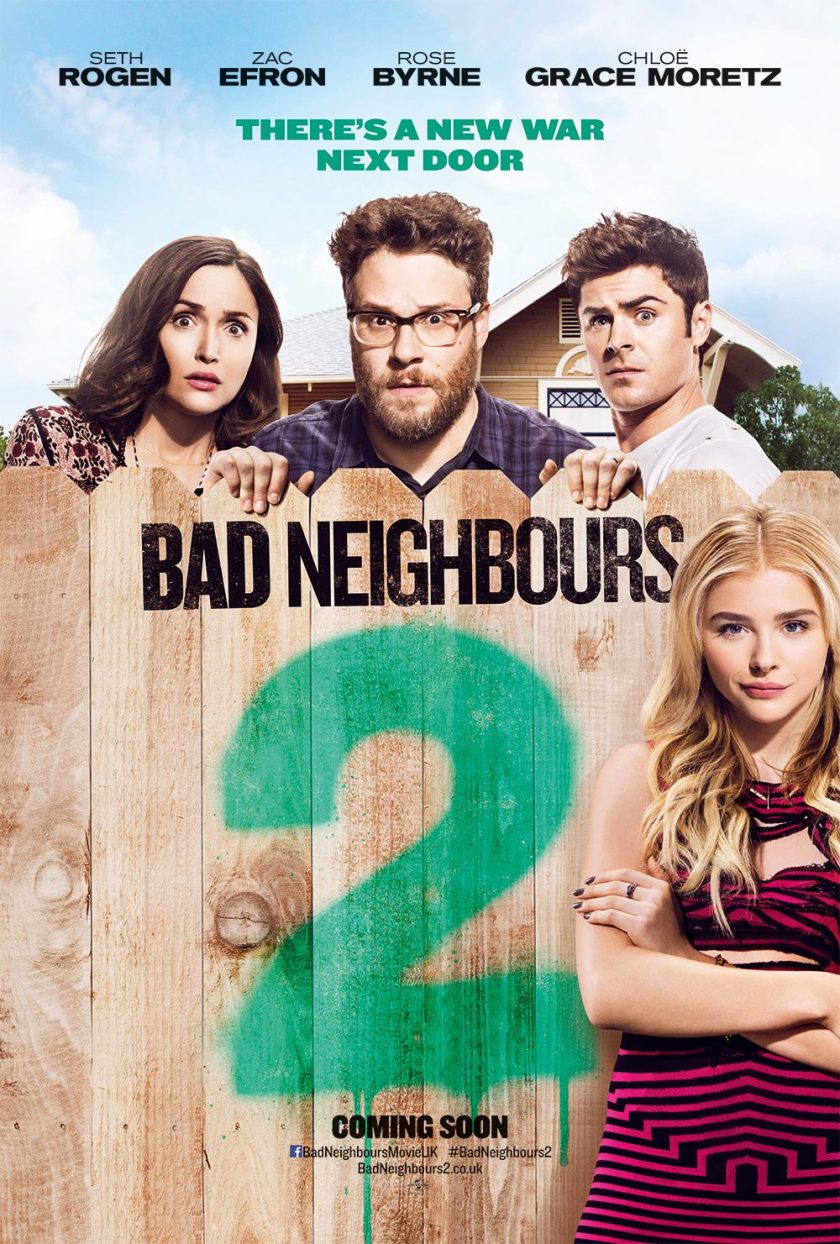 Structurally, the two films are practically identical: the Radners (Rogen and Byrne) find new neighbours that could cause them problems, they try to work it out but things go awry, and then the two sides battle it out through a series of pranks and property damage. Like the original, the film does a decent job of giving the opposing side, in this case Chloe Grace Moretz’s upstart party sorority, motivation for their actions. By bringing in subjects like feminism and the gender bias of American college society, Bad Neighbours 2 again shows a little more depth that you’d expect from a comedy full of gross-out humour. The way the movie continues Zac Efron’s storyline is also an excellent and natural extension of his arc from the first film, continuing to show how difficult it can be for aimless young adults to transition into regular society. Unfortunately, the film falls apart because not only does a lot of the connective tissue feel recycled from the last film, it simply moves too fast for anything to actually sink in. Whilst the first film had many memorable scenes of hijinks ranging from the frats annoying the Radners with their Robert de Niro impressions to a full on brawl through the frat house, Bad Neighbours 2 barely has any. Many of the individual jokes scattered throughout are worth a laugh and the film does admittedly manage to get a few more gags out of the airbag stunt from the original, but pacing-wise the film feels a little uneventful and the climax is disappointingly resolved with very little physical conflict. It is somewhat refreshing to see a comedy like this end with a more intellectual and positive resolution, but it doesn’t exactly make for great entertainment.

Seth Rogen and Rose Byrne made for a surprisingly effective comedy duo in the first film, and that wonderful chemistry does carry over into the sequel as they constantly question their legitimacy as parents. However, their characters don’t really go anywhere that interesting this time around, their growth this time around feeling like a baby step compared to the evolution they went through last time around from trying to recapture the glory of their youth to accepting their position as responsible adults. Here, it feels like they’ve backpedalled into that irrational state they were in last time before reverting back to slightly more mature. As mentioned before, Zac Efron remains an entertaining presence as the jock manchild Teddy as he struggles to comprehend he’s now an adult and regresses back to his old ways by helping out the sorority girls, but the resolution to his issues comes a little too out of leftfield; I almost wish the movie was more his belated coming-of-age story rather than another parents vs college kids scenario. Dave Franco comes back in a smaller role, and what they’ve done with his character I have to admit is a brave and bold move that’s equally touching and hilarious; it may feel a bit out-of-nowhere at first, but think back to the first movie and it totally makes sense.

But where the film ultimately falls flat is with Moretz and her sorority sisters. Sure, Moretz herself is an entertaining presence and proves herself just as capable at comedy as Efron did in the original, and the sorority’s motivation to defy the sexist system is certainly bolder than the frats’ “become party legends” plan. But that film not only built up a better camaraderie between these kids, but also a strong relationship with the Radners. Here, the two sides are at odds pretty much from the word go, and though Rogen and Byrne do initially sympathise with the girls’ problem there’s never that moment where they actually connect the way Rogen and Efron did. This would have been a great opportunity to build up that kind of relationship between Byrne and Moretz’s characters, but it’s only kind of done off-hand at the last second. Furthermore, the other sorority characters lack the identity that the side frat characters had in the first; even minor players in that film like Christopher Mintz-Plasse and Craig Roberts had something to them. Here, the only others that get prominent roles are Kiersey Clemons and Beanie Feldstein, but in writing this review I’m actually struggling to remember any really defining moments for these characters.

I know I’ve been very critical throughout this review, but I did enjoy myself watching Bad Neighbours 2 far more than I didn’t. There were plenty of jokes that did make me laugh that I’d rather not spoil, and I can at least commend the film for trying to be socially relevant like its predecessor with its messages about female empowerment. The problem is that it does so far more haphazardly with a wonky and rushed story that lacks the character depth that made the first movie more than what it seemed on paper. There’s enough that works here for it to be an enjoyable enough experience, but I do feel like this is a movie I’m going to mostly forget about by summer’s end.