Making a unique heist film is very hard to do. They’re heavily reliant on formula, so it’s very easy to follow it to the book and end up being generic, but if you stray too far it loses something. Triple 9 does bring a couple of new ideas to the table and, though nothing it does is particularly groundbreaking, it is an entertaining ride whilst it lasts. 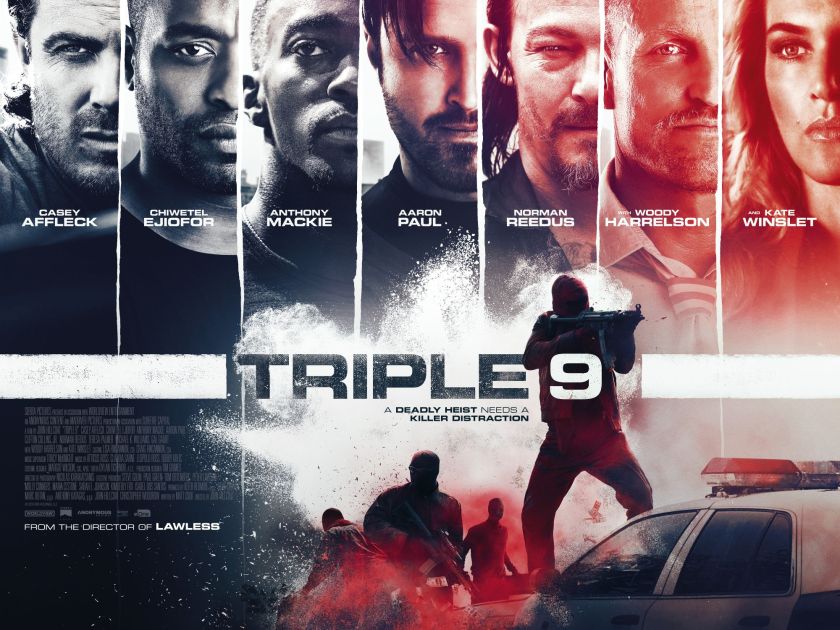 A major theme of Triple 9 is crossing threads and coincidence, so fittingly the story is told through various intersecting characters that form the bigger picture. It’s a technique that certainly helps increase the citywide scope of the narrative, but with so many plotlines to follow it does end up meaning the individual stories are quite simple. You’ve got the rookie cop struggling to fit in, the noble criminal fighting for his family, the crooked cop caught between two worlds, and they’re all stories you pretty much know the basic beats of; if you’ve seen The Departed, The Town, Point Break, Heat, Sicario, or any other such film, you know what’s coming. However, the film ultimately works because all these different stories are weaved together well enough through pitch-perfect pacing. After an exciting opening bank heist, a looming sense of tension is quickly created and the anticipation for the climax slowly builds throughout the entire film instead of just the last third. When the finale eventually kicks off, it feels a little abbreviated, but the epilogue is where every storyline truly pays off and the film ultimately ends on a suitably thematic note.

Triple 9 has an incredible cast, and though many of them get far less screen time than they deserve, I don’t think anyone’s phoning it in here. Casey Affleck’s Chris Allen is a little by the numbers, but the actor overcomes the marginal material with a powerful performance that hints at a darker, more inquisitive character. Anthony Mackie is great as the conflicted Marcus, injecting his natural charm into the character whilst never making us forget his more nefarious side; whether he and Affleck are arguing or bonding, it’s a compelling watch. Woody Harrelson is as engaging as ever as the vice-ridden but noble detective, and it’s great to see Clifton Collins Jr get a more prominent role that actually allows him to show off his talents. Chiwetel Ejiofor ends up stealing the show though (as he so often does), mining a lot of sympathy with very little screen time to create a character whose moral compass is very hard to pinpoint. The rest of the cast, whilst generally good on a performance level, is more problematic in terms of material. Aaron Paul is saddled with yet another variation on Jesse Pinkman, Norman Reedus’ role is basically an extended cameo, and Teresa Palmer and Gal Gadot’s roles can be summed up as “Affleck’s wife” and “Ejiofor’s baby mama”; that’s literally all there is to say about them. Kate Winslet playing a Russian mob boss is something I didn’t expect to be in her range and, though she certainly looks the part, her accent faded in and out and she ultimately doesn’t get her hands dirty enough to be threatening. Oh, and Michael K Williams is only in one scene, but he gets to play a role you’d never expect him in and he nails it.

Triple 9 doesn’t do anything to really make it stand out as a heist movie, but it does its job effectively enough. The pacing is tight, the performances are generally strong, and the way its structure and themes intertwine is interesting, but there isn’t anything that makes it something you need to rush out and see. If you’re curious enough and are in the mood for a dark but fun crime thriller, you could do far worse.