Director: Francis Lawrence (I Am Legend)

Writers: Peter Craig (The Town) and Danny Strong (The Butler)

And so another franchise comes to an end… until the studio can figure out some way to make a prequel or spin-off within the next decade because, well, everyone else is doing it. At least I think it’s safe to say the story of Katniss Everdeen has come to an end, and I was amongst others hoping it would be an epic conclusion to the story. After Mockingjay – Part 1 proved to be boring for some with its focus more on the politics rather than the action, there was some hope Part 2 was saving all the excitement for an explosive finale in the vein of Harry Potter and the Deathly Hallows Part 2. However, to paraphrase T.S. Eliot, this is the way The Hunger Games saga ends, not with a bang but a whimper. 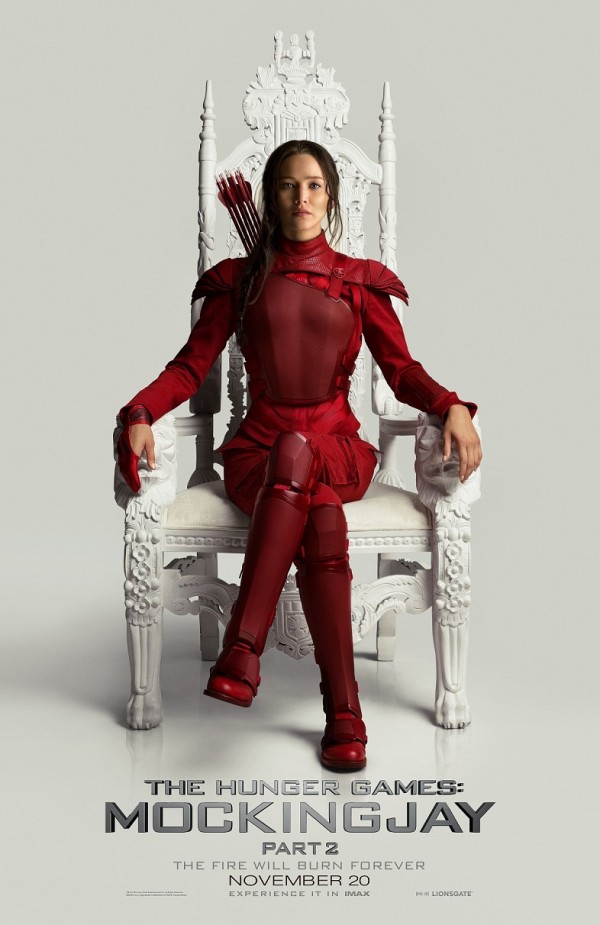 Mockingjay – Part 2 picks up right where Part 1 left off and continues on with the story like you never left with little to reintroduce you to the world; it’s like coming back to a movie you stopped watching halfway through. Part 2 is easily the most accurate page-to-screen translation of all the films, with nary a detail from the novel not present in some form. To those who know what’s coming, no major events have been changed and it ends exactly as it did in the book. It’s rare to see an adaptation this accurate, but Mockingjay – Part 2 is a case study in why novels are changed when adapted to movies. Every problem with this movie stems back to the decision to split the novel into two movies as, just like with Part 1, there are serious pacing and structural problems. Despite being mostly set within a war-torn city with danger around every corner, action scenes are scant to make room for more scenes of characters talking to discuss the nature of war and their evolving relationships within it. These scenes are fine and do build some nice character moments, but for every five of these scenes there’s only one brief action sequence and, as well done as a lot of them are, almost all of them could be cut with little impact. About half the movie is just set-up, then a quarter is the actual action broken up heavily with quiet moments, and then the last quarter is all epilogue; if you thought The Lord of the Rings’ endings dragged on you’ve seen nothing. Of all the movies in the franchise, this is the one that would have benefitted the most from cutting away from Katniss’ story to show more action with the war, but all you see of that is smoke and gunfire in the distance; it ends up making what’s supposed to be this final confrontation with thousands of lives on the line feel incredibly small. Apart from a few plot twists that were a bit mishandled I actually have no problem with the story of Mockingjay – Part 2. It’s well written on a dialogue and emotional level, it wraps up all loose ends, and it concludes on a satisfying if somewhat treacly note. I just have a problem with the way the story is told, and it is all because this two-hour plus movie should have been the final 45 minutes of a one-film adaptation of Mockingjay.

The Hunger Games has enjoyed a strong cast throughout (Liam Hemsworth withstanding, but the character of Gale was never good in the books either), and they all deliver great performances as expected. Jennifer Lawrence never fails to impress and, though her series highlights are behind her, she brings a solid send-off to the character of Katniss. Josh Hutcherson ends up being the main standout performer mainly given Peeta’s altered state after the events of Mockingjay – Part 1, and he sells his portrayal of a broken and confused young man unsure of his own sanity whilst also being a constant wildcard for the rest of the group. Special mention must also go to Elden Henson for his portrayal of Pollux, able to command so much emotion and sympathy without being able to say a single word, and to the ever-delightful Donald Sutherland as the villainous President Snow; I thought his final couple of scenes could have been handled a little more subtly, but he still remains a wonderful adversary throughout. It’s somewhat sad to say this is the late Phillip Seymour Hoffman’s last movie because he’s not in it very much, but given he passed away before finishing his scenes it’s understandable; the accommodations to the plot they’ve made due to this are relatively minor, but his presence is still sorely missed. Oh, and for Game of Thrones fans, Gwendoline Christie is in the movie…for one scene where she does nothing but stand still and exposit. Wow, what a way to waste your Brienne of Tarth.

Action in Mockingjay – Part 2 is limited, but what’s there is as well handled as the action in Catching Fire in terms of intensity and fury. Everything’s well shot and choreographed, with a chase and fight in the Capitol’s sewers that owes a lot to Aliens being the movie’s action highlight. The production design and costumes are exactly as you’d expect from the franchise with looming fascist architecture and a mix of dull blacks and greys for the rebels and extravagant outfits for the Capitol, though with the character of Tigress they’ve certainly outdone themselves on ostentation. James Newton Howard repeats a lot of the same themes from his previous scores for the franchise, but in doing so it does help call back to important moments without the need for flashback.

The Hunger Games: Mockingjay – Part 2 is a movie less than the sum of its parts, mainly because most of its parts were used to make the previous movie. It works perfectly fine as a conclusion to the story and fans are going to see it no matter what, but there’s too much fat and not enough lean for it to be a truly satisfying experience. I really would love to see if any fans will recut the Mockingjay movies together into one 3-hour film and if that will help alleviate all my problems, but this version of the story as it stands is far too bloated and frankly tedious to sit through at points. Cutting one book into multiple films has only worked once before with Harry Potter and it worked because it was done for creative reasons rather than just raking a stronger box office. Mockingjay didn’t need the multi-film treatment and it’s only hurt the franchise in doing so. It ends up feeling like the last hour of a really good party that’s starting to lose its lustre but the host won’t let you leave until you’ve said goodbye to everyone; it’s fine, but you wish you could have left a little sooner.