For someone who’s only existed for a little over a century, Peter Pan is one of those timeless characters that every child knows about. Whether through the original play or the many film adaptations, The Boy Who Wouldn’t Grow Up serves as both a childhood fantasy and a warning about immaturity. Exploring the origins of this character is not a bad idea, and that’s exactly what Pan claims to be doing. Unfortunately, imagination doesn’t seem to be on the filmmakers’ side. 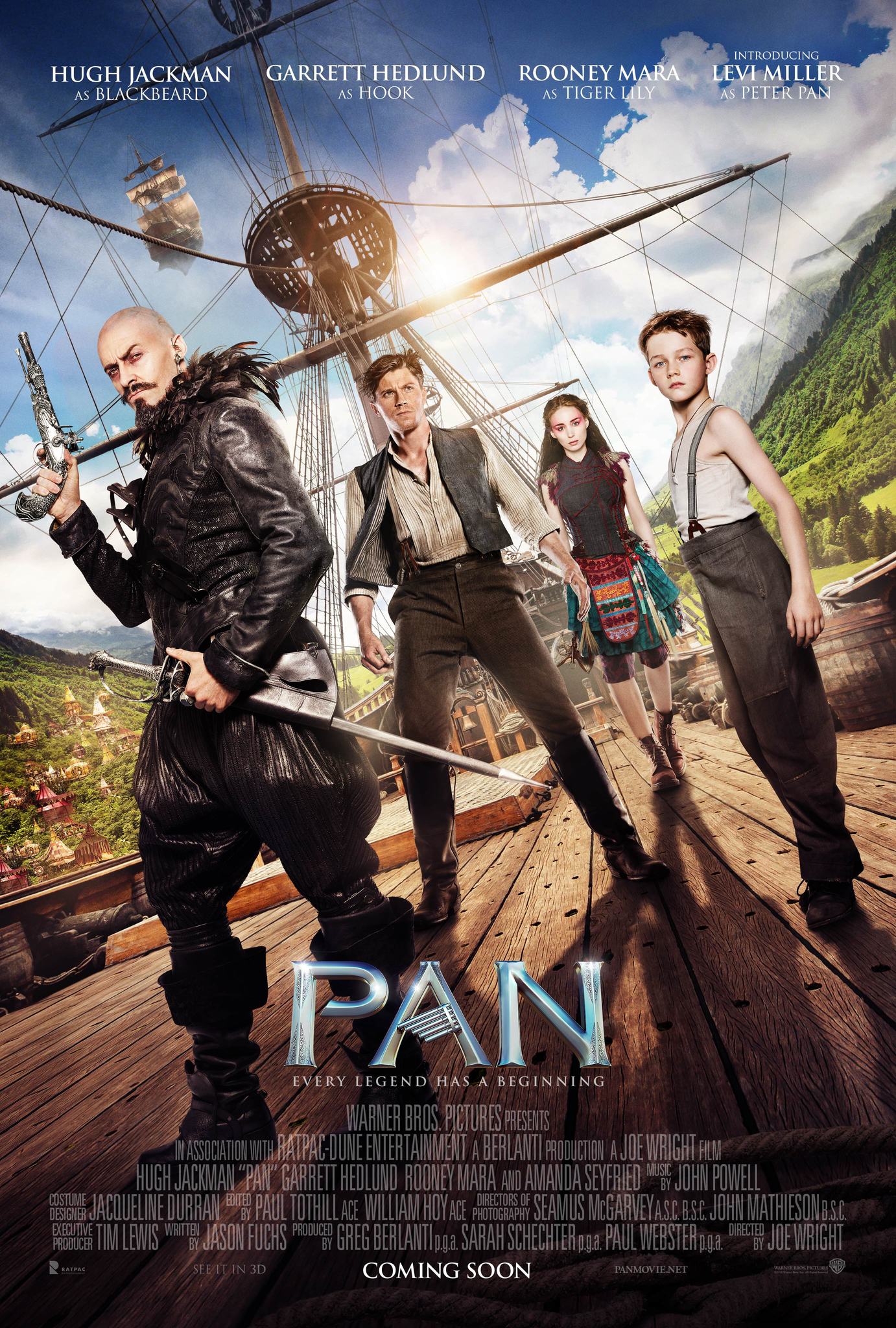 Pan is yet another example of Hollywood taking a classic story and cramming a “chosen one” narrative unnecessarily into it; see also Alice in Wonderland, The Amazing Spider-Man and Teenage Mutant Ninja Turtles. The plot is incredibly generic and predictable from start to finish, following genre tropes to the letter without a trace of irony or self-awareness. In a post-LEGO Movie age, it’s hard to get away with this kind of story without an interesting twist on it, but Pan seems to think that all this tired nonsense about prophecies and mysterious pasts is the twist. The film also fails on the promise of being a Peter Pan origin story as, by film’s end, the characters are far from where they were in at the start of the original story; perhaps they’re betting on making this a franchise. But bland storytelling aside, Pan also suffers from just plain old illogical creative choices. Why is the film set during World War II when the original story was written in 1904? What exactly led to nuns selling orphans to pirates? Why do the pirates sing anachronistic songs like “Smells Like Teen Spirit” and “Blitzkrieg Bop” for no apparent reason? And what is the point of Blackbeard wanting to use pixie dust as a source for immortality when it doesn’t at all factor into the plot beyond one quick scene; couldn’t he have just want it as a power source for his ships or something, and why is he having aging problems when he’s living in a land where nothing ages?! I know we’re using fairy tale logic here, but even with that these choices are just bizarre and don’t mesh at all.

Like the film’s style and tone, the performances in Pan are all over the place. Levi Miller is serviceable as Peter, but he’s written as far too noble and sweet. Peter Pan is supposed to be a mischievous and hedonistic kid but here there’s barely a hint of that, instead leaving us with yet another bland protagonist who’s only special because the plot keeps telling us he is. Hugh Jackman’s Blackbeard is overly theatrical and thinly drawn as a villain, his aforementioned motivations being weak and his presence far too comical to be taken as a serious threat; there are hints of a deeper character here through fleeting references and Jackman’s performance but it never reaches surface level. Rooney Mara’s casting as Tiger Lilly again led to claims of whitewashing, but I criticize the casting not so much for equality reasons (FYI, the Neverland natives are depicted as multicultural, but having a white woman as their princess is still a little off) but just Mara herself in general. Her character only serves the functions of spouting exposition and being a generic badass, and Mara’s performance is little more than saying her lines in a monotone quasi-British accent and smirking occasionally; it really reminded me of Natalie Portman in the Star Wars prequels, and that’s not a good thing. But the real killer in bad casting is Garrett Hedlund as James Hook. He fails to at all sell that this character will one day go on to be Pan’s great nemesis, with Hedlund instead portraying Hook as the aborted love child of Han Solo and Daniel Plainview; whatever dialect he’s attempting to do, it’s not working for him. The only saving grace is Adeel Akhtar as Smee, here portrayed somewhat like a pirate version of Maurice Moss, but his importance to the plot is sidelined by the film’s halfway mark.

Joe Wright has always had a great visual eye whilst not forgetting about story, but here the style not only outweighs the substance but the style itself isn’t that good either. It’s nice to see a film that embraces colour so much in a cinematic world defined by greys and browns, but the amount of saturation on screen can become a bit overpowering. The design aesthetic of the film is a bit imbalanced, with the pirates and natives being gaudily overdesigned whilst characters like Pan and Hook look far blander in comparison. John Powell’s music is suitably majestic and whimsical, but compared to his work on How to Train Your Dragon and Kung Fu Panda it’s practically just background noise. But Pan’s real problem on the technical front is that it relies far too much on CGI. It feels like half the movie was made in the computer and, whilst the effects are passable for the most part, it still clear that almost nothing you’re seeing on screen is actually there. I know this is a fantasy film and Wright could be going for the same Brechtian approach he had to Anna Karenina where he’s actually trying to amplify the artificiality of it, but here it just ends up making the film look shoddy and fake.

When Pan isn’t bombarding you with its bizarre creative decisions, it’s just being a generic fantasy story. It moves briskly and it’s never a pain to watch, but there’s nothing that really stands out about it despite all the weirdness on display. The screenplay is generic, the cast is poorly chosen, and despite his talent Joe Wright was just the wrong choice for this material. There are far superior film versions of Peter Pan out there that better capture the innocence and the essence of that classic tale far better than this, so unless you’re a die-hard Pan fan who has to see everything I suggest you watch one of those instead.