American Ultra itself isn’t too dissimilar to its protagonist: it has the ability to do some incredible things, but it’s hampered by how incoherent it is. It’s a film that’s trying to straddle multiple lines at once and fails to balance on any of them, resulting a film that could have been great if it just went that extra mile and dared to be different. 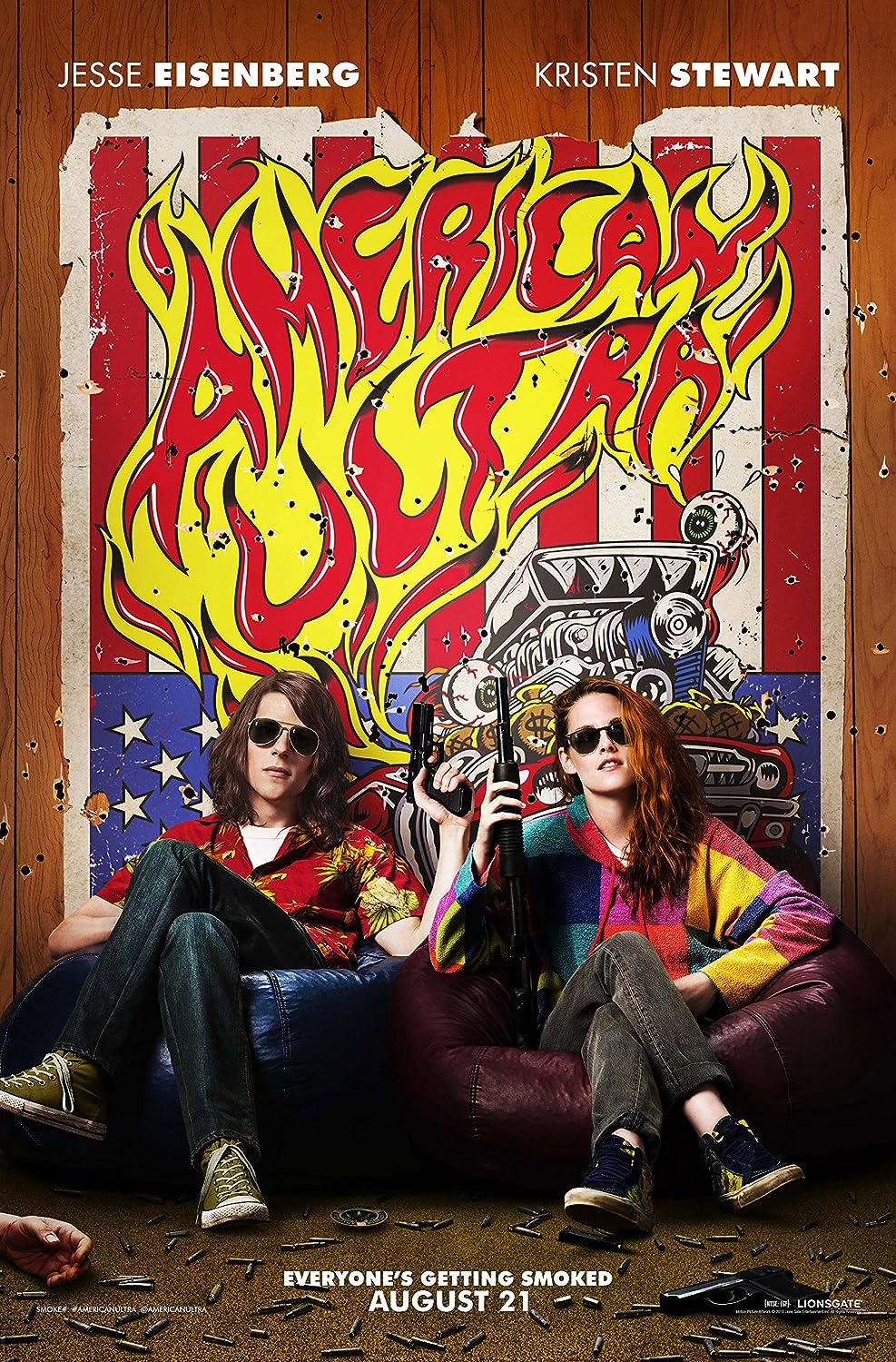 The “sleeper agent” story is well-trodden ground with great examples like The Bourne Identity and The Long Kiss Goodnight, so American Ultra already has a lot going against it from the start. Though the approach of telling the story with a confused stoner as the badass killer is novel, the film doesn’t take much advantage of this new angle other than having Jesse Eisenberg being bemused by his actions and spouting a typically awkward quip after each kill. The story plays out as you’d expect with no real surprises (even the moments that are supposed to be surprises), leading to a sequel hook for a movie that sounds far better than the one we actually got. The film is efficiently short but still drags in the first half, the action scenes are far too brief and don’t go anywhere near as wacky as they could, and other than the occasional funny line most of the humour falls flat. However, the main problem American Ultra has is that it just can’t decide on a tone. The film flits from goofy stoner comedy to tense thriller to wacky shoot ‘em up from scene to scene, and none of these different facets are strong enough on their own to be entertaining. If the film had just been straight-up ridiculous entertainment from beginning to end, I would be far more forgiving of the film’s more generic aspects, but American Ultra just doesn’t have the guts to go full bananas.

Jesse Eisenberg and Kristen Stewart played off each other very well in the underrated Adventureland, and that chemistry still works here for the most part, but the material just isn’t as strong. Their early scenes as a bizarre but cute couple feel genuine and sweet, Stewart especially shining with her usual brand of awkward but somehow absorbing charm, but when the plot actually kicks in their relationship becomes less and less compelling. This especially becomes clear during a mid-plot reveal that splits them apart, and it comes off just as contrived and annoying as when they pull this trick in every bad romantic comedy ever; if they just calmed down and talked like sensible people, then there wouldn’t be a problem (then again, they’re not exactly normal people). Topher Grace comes off as far too goofy and inept to be a credible villain, Connie Britton’s character kind of becomes superfluous after kickstarting the plot, and the film just doesn’t have much to do for the rest of its decent supporting cast; why even hire Tony Hale if he’s not going to do anything funny?

Despite being sold as such, American Ultra is surprisingly light on action for an action-comedy and what’s there isn’t that interesting. Though a lot of the methods of killing are done with unconventional things like spoons and frying pans, none of it is done with much flair or excitement. The way the action is shot is also peculiar. Despite most of it being filmed from a good distance and edited smoothly, it’s still shot with a bunch of superfluous shakycam that only distracts from the action; it’s a pointless stylistic choice, especially when it’s clearly not even needed to cover up anything. The whole movie just has a cheap, slapdash look to it; other than a visually unique trip to John Leguizamo’s UV-lit drug den, most scenes take place in barren-looking buildings and streets that could use a few more decorations or an extra or two.

On the outside, American Ultra looks like a wacky mash-up with unique ideas, but underneath it doesn’t actually have anything new to say; it is the cinematic equivalent of a hipster. Though Eisenberg and Stewart’s on-screen dynamic is mostly compelling and it does have flashes of brilliance, the film just plays it far too safe and always takes the easy road instead of embracing the lunacy. In a year where batsh*t insane action films like Mad Max: Fury Road and Kingsman: The Secret Service exist, even taking American Ultra’s more modest ambitions into account it still comes up short.