The vampire craze seems to have died down since The Twilight Saga finally withered away (but beware, for there is word it may return). Nevertheless, that doesn’t mean that vampire films will stop being made, nor does that guarantee that they will be good in this sparkle-free land we currently live in. Unfortunately Dracula Untold, as much as it tries, is not good. 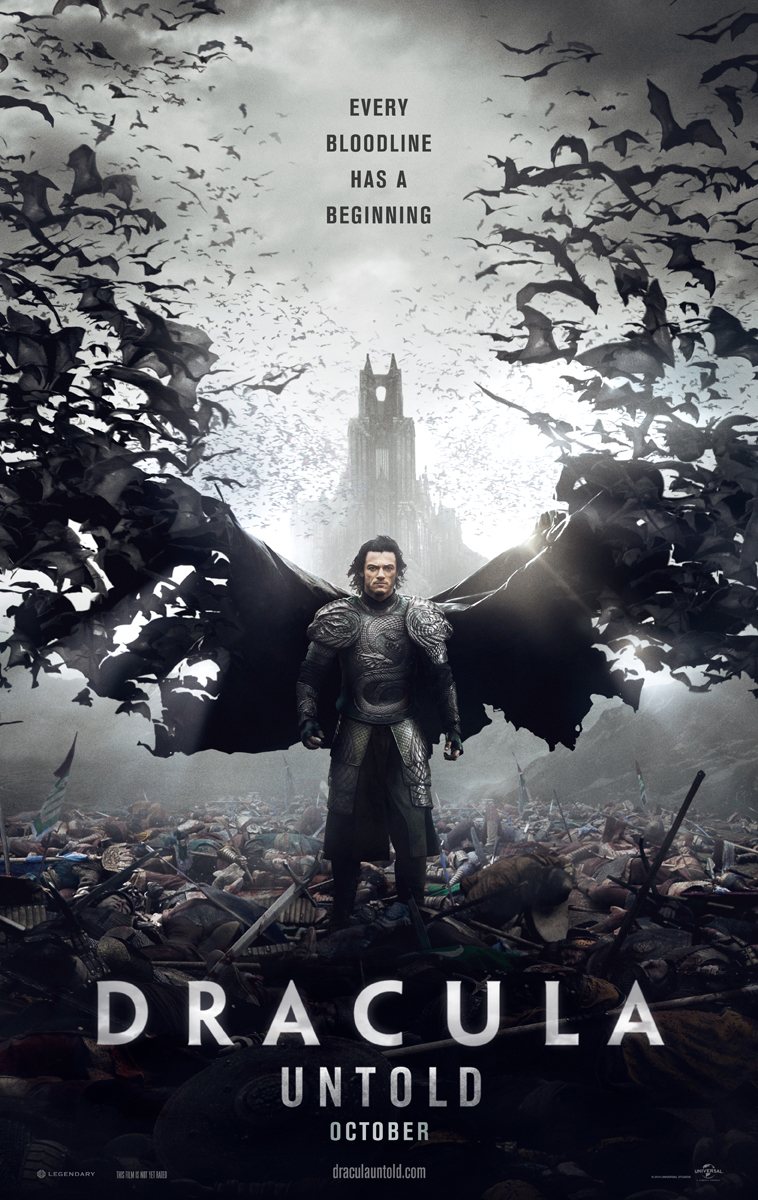 Right off the bat, I want to make it clear that Dracula Untold is not a horror movie in any way. It’s more of a mixture of dark fantasy and superhero flick, and on paper some of its concepts seem like they could make an interesting film. Drawing inspiration from the character’s real-life inspiration Vlad the Impaler and casting him as a morally ambiguous protagonist do have certain draws to them that have the potential to be fascinating if handled properly. However, the movie scuppers this by its impatience and its thirst for spectacle. The film is not only short but also taxingly fast-paced, leaving barely a moment to linger on plot development and rushing to get to the next action sequence. It’s just plot point after plot point, only stopping for the vaguest semblance of character moments because I guess they felt like they had to. There is barely any time to learn a character’s name, let alone linger on the implications of Vlad’s (Evans) actions beyond the obvious surface level, so by the film’s end it’s hard to care about the fates of any of the story’s inhabitants good or bad. Though its nature as part of Universal’s plans to create a Marvel-esque shared universe of its monster characters is uncertain, the film certainly screams for a sequel with its conclusion. What that sequel will be, I don’t know nor do I particularly care.

Many interpretations of Dracula have inhabited pop culture for many years, from Bela Lugosi to Gary Oldman to The Count from Sesame Street. That said, Luke Evans’ portrayal of the legendary character probably won’t be remembered and instead be filed alongside other such forgettable Draculas like Richard Roxburgh and Gerard Butler (yeah, I bet you’d completely forgotten he was in Dracula 2000). The main problem with Evans’ Dracula again stems from the film’s unrelenting pace. The story suggests that he is this tormented figure who’s had to do bad things to protect his people, but because everything’s been so simplified to make room for more action, t he barely ever comes across as dark or threatening. Pitting him against Dominic Cooper and his Turks, who are portrayed as morally bankrupt and with very little dimension, doesn’t help matters much either. Because of this, Dracula doesn’t seem any less heroic or morally contemplative than the average superhero. We are supposed to fear this character, but the film never makes you because all his adversaries are worse than he is. The rest of the cast is completely forgettable, playing stock characters with nothing at all that interesting or special about them. Sarah Gadon as Dracula’s wife talks some game about fighting alongside him until the end, but you could easily replace her with a really important but still inanimate lamp and the plot would make about as much sense; similar sentiments can be made for Art Parkinson as his son. Even the legendary Charles Dance feels wasted, only showing up for a couple of scenes to advance the plot with the hint that he’ll be more important later on in the theoretical follow-up.

Much like directors who used to work in other departments of the film industry, directors who’ve spent most of their careers making music videos and commercials don’t always adjust to the transition; for every David Fincher or Ridley Scott, there’s a Michael Bay or a Rupert Sanders. Gary Shore falls into the latter camp. Whilst the film does have a good visual flair to it with its grand production design and detailed costumes, that’s all it really has going for it. Considering how much the film skimps on story in order to fit more action in, you’d think that would mean the action sequences would be really impressive. They’re not. Thanks to frenetic camera work, choppy editing, average CGI and most of them taking place at night, the action sequences fail to engage for the most part. The final battle at first seems like it could be really cool by throwing some interesting ideas into the mix, but it never takes full advantage of them. By the end, the film’s spectacle feels just as empty and lacking in substance as the story.

Dracula Untold tries to do something different with the character’s mythology but buckles from trying to do too much in too little time. The story is rushed and underdeveloped, the characters are stock and dry, the action is underwhelming, and the few good ideas that shine through are undermined by everything else. If Universal wants this to be the beginning of a franchise, whether contained to Dracula himself or tied to their planned shared universe, this is a poor way to start. I think their best option at this point is to Green Lantern this mess and try again.