The subject of slavery is always a touchy one. It’s hard to believe that such atrocious acts were committed, and not that far in the past either. Films that touch on slavery aren’t exactly rare, but 12 Years a Slave really does stand out from the pack because it comes from (surprisingly rare) perspective of a slave; one who really existed, and one whose tale is truly unjust. Writing this review is very tricky: not just because it touches on sensitive subject matter, but because it is very hard to put to words what this movie did to me. I’ll do my best but, if it isn’t clear to you by the end of this article, I’ll just state the fact of the matter now: 12 Years a Slave is a masterpiece. 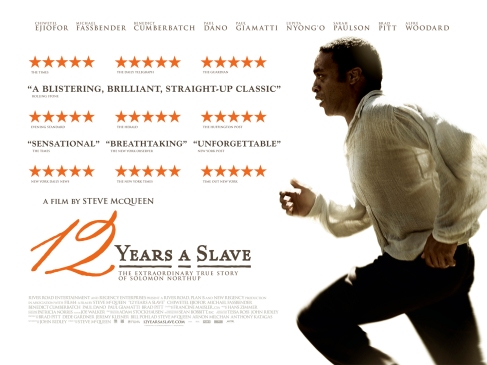 As said before, this is based on a true story; how much embellishment this story has had in its translation to cinema is unknown to me, but from the looks of it I’d say very little. The story of Solomon Northup (Ejiofor) is a true tragedy from beginning to end; he is as sympathetic as you can get, and what this man endures and sees is nothing short of horrifying. If you’re looking for an uplifting tale that balances the misdeeds with plenty of silver linings, you are looking in the wrong place; The Help this ain’t. It is pretty much just watching this man’s struggle through its downs and not-quite-as-downs, and it is just fascinating to behold. That is, when you can bare to watch it. So many scenes are incredibly difficult to watch for a variety of obvious reasons, and those squeamish amongst you will certainly feel the terror. I don’t know what much else to say. It is just one of those films you need to see for yourself to truly understand. If I had any complaints, I’d say the flow of time is a bit unclear and the resolution is a bit quick, but nothing else. And those few complaints quickly get washed away in a sea of magnificence.

12 Years a Slave boasts one of the most impressive casts I’ve seen in a while, and there is not a single weak performance amongst them. Ejiofor is an actor whose been popping up for quite a while now doing excellent work whether in serious drama or fantastical blockbuster (heck, he was the only thing that made 2012 watchable), and it’s about time he got to headline a film. And boy is it one mighty performance. This is a role that is sure to make Ejiofor a major league player in Hollywood for some time to come, and deservedly so. Every inch of his performance is oozing with despair and torment; you can just feel how much this man wants out of this situation and you will feel everything he feels. But everyone else puts in their A game as well, whether they play fellow slaves or the most detestable human beings imaginable. Michael Fassbender truly transforms into an utter monster here as he relentlessly torments and provokes his “property”, and his wife (Sarah Paulson) is just as cruel in a much more cold and vindictive way. On the other end of the spectrum, Lupita Nyong’o is a revelation as the constantly abused Patsey who often outshines Ejiofor on the emotional spectrum, and I’m sure she too will find a lot of work after this. Even the smallest of roles are filled by top shelf actors: Benedict Cumberbatch, Paul Dano, Brad Pitt, Paul Giamatti, Scoot McNairy and Quvenzhane Wallis to name a few. All of them are in the movie for very limited periods, and in that amount of time all of them put in as much effort as they would if they were the star. Never have I seen such an impeccable cast in a motion picture, and I applaud them all for their efforts.

Steve McQueen (for the last time, not THAT one) has a background in art, and that really does show in his work. He is a particular fan of long continuous takes and, whether moving or static, he and cinematographer Sean Bobbitt have crafted one beautiful looking piece of cinema. Every shot looks finely crafted and the infrequency of edits adds to the sombre nature of the piece. The production design and costumes are fantastic, and the make-up work done to make all these slaves look beaten and abused is incredibly well done. Hans Zimmer provides a riveting score as always, but I didn’t always appreciate it. This is a film that works best when quiet and moody, and I sometimes felt his compositions felt a little too bombastic; as if we needed a reminder that this film is serious business. That and I felt the score sounded too similar to some of his other work (I swear, half the time I just thought he reused the score of Inception).

12 Years a Slave is one of the few films this year that nearly moved me to tears. I left the screening of this totally overwhelmed, thinking about what I had just witnessed. It is possibly the most beautifully tragic films I have ever seen, it is sure to win some major awards, and is a big contender for my favourite film of 2013. It is certainly a film that I highly recommend you see, but go in knowing that you will most likely come out of it seriously depressed.

One thought on “12 YEARS A SLAVE review”