In my opinion, Edgar Wright can do no wrong. Shaun of the Dead, Hot Fuzz and Scott Pilgrim vs The World are all among my most favourite films of all time, and even films with minor connections to him like Attack the Block and The Adventures of Tintin are great. Finally closing out the Three Flavours Cornetto Trilogy, is The World’s End a perfect capper to the franchise, or has his winning streak unfortunately come to a stop? 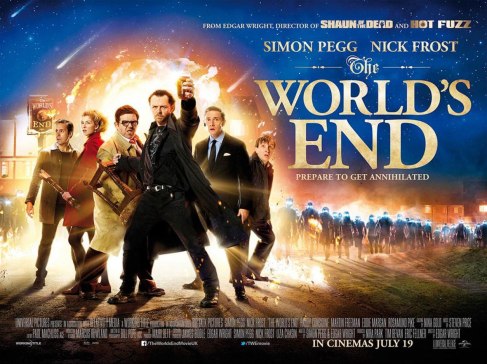 In a very similar move to Shaun of the Dead, The World’s End’s first act features nothing out of the ordinary. It begins as a simple tale of old friends reuniting, remembering the good and not-so-good old days, and coming to terms with their lives. But in the fashion of From Dusk Till Dawn, the film kicks into gear and becomes the kind of film we all expect from Mr. Wright. Running gags, both from within the film and ones continuing from its predecessors, are major parts of the film, and for the most part the gags click. Wright and Pegg have always been firm about the fact that they are not parodists, and The World’s End feels the least like one of the trilogy. It feels much more adult than the first two, and it also has a lot more to say than them. Whilst Shaun and Fuzz were content to just throw out gags, this film has more of a message about maturity and the nature of human behaviour. That’s all fine, but it does sometimes distract from what we’re all here for. This, along with a runtime that feels a little stretched and an ending I’m sure some people will be disappointed with, leaves us with a film that isn’t perfect but still stands shoulders above most summer fare.

The duo of Pegg and Frost are what make these films great, and their camaraderie is still intact in this third outing. It’s refreshing to see them swap roles, with Frost now the responsible adult playing off of Pegg’s man-child. It all eventually comes down to them getting over their differences and admitting their friendship as usual, but they’re still the cement keeping the gags together. The supporting cast is suitably up to the challenge and all get their moments to shine. Marsan is the biggest surprise of the bunch, getting in a lot more laughs than I expected. Freeman is his usual cheery self, and whilst Considine isn’t playing a character as OTT as he got to in Hot Fuzz, he’s still worth a few laughs. Rosamund Pike is good when she’s on, but she keeps disappearing for long stretches and her subplot between her, Pegg and Considine feels a bit rushed. Other Wright regulars are strewn about the film, but I’ll leave it to you to spot them.

Edgar Wright has a very distinct visual style, and that style is very evident across the film. Wright clearly learnt a lot about staging fights from his work on Scott Pilgrim, and that is clear in the way he’s staged the action scenes here. They are inventive, exciting and expertly shot by the master himself Bill Pope. The visual effects are used sparingly, making use of practicality as much as possible, and both the score and soundtrack is perfectly chosen to fit the mood.

The World’s End is the Return of the Jedi of the series: a film that caps off the trilogy in good fashion, but could have been better in many areas. I get that Wright and Pegg wanted to make a more mature film to reflect their evolution as filmmakers and their own maturity. But sometimes that got in the way of the humour for me. It’s easily Wright’s weakest film, but that by no means that you shouldn’t see it. It’s a fun-filled time at the cinema, and one of the best films of the year so far. Don’t worry, Edgar; your winning streak has yet to fail. Now get to making Ant-Man already!