This summer, the comedy giants from both sides of the pond have decided to make a movie about the end of the world. Whilst Britain’s The World’s End doesn’t bow for another couple weeks, This Is The End is here to show us what would happen if a bunch of celebrities tried to survive the apocalypse. 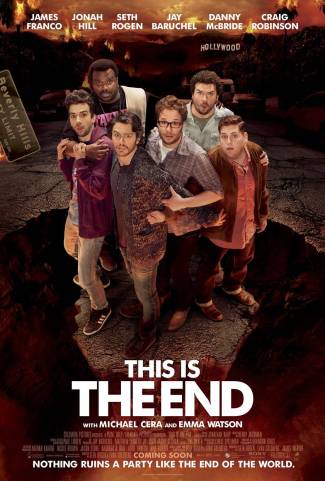 I don’t think most fans of Seth Rogen movies go because of the plot, but the set-up here is unique and well executed. Instead of focusing our attentions on the survival of the underdogs or the bad-asses, our main characters are a bunch of slacker actors with a complete lack of survival skills. The film is full of constant humour of all kinds, though most of it centres on exaggerating or reversing the public view of the celebrities in the film. There are constant references to the actors’ previous films, whether positive or negative, and it’s good to know that even these guys can take the piss out of themselves. The film also deals with many scenarios from similar apocalyptic films, but always manages to put a humorous twist on the proceedings. The movie even manages to squeeze in the tired exorcism scene, but actually manages to make it work. Rogen and Goldberg have managed to construct a very tight film here; one that holds up and moves at a good pace despite being mostly relegated to one house. I can’t talk about much else without spoiling the fun, but just know that if you like the movies of any of these actors involved, you’re probably going to enjoy this.

None of the actors in This Is The End are stretching their muscles too much, but they honestly don’t have to. They all have clearly good chemistry between them, and they all have unique relationships with each other. The particular stand-outs in the main cast are Robinson and McBride, who flat-out steals every scene he’s in; even if you hate McBride (and I usually do), you’re going to love his stuff. The film is also full of other cameos, some of which are more extended than others. Some like Emma Watson are a bit more fleshed out, but certain great comedians like Paul Rudd and Aziz Ansari are only one step above blink-and-you’ll-miss-‘em. But out of these smaller roles, Michael Cera owns it. He is probably the most changed from his usually public persona, here portrayed as a coked-up jackass and I only wish he had more screen time.

Comedies of this nature don’t usually have technical aspects that are worth talking about, but there’s some very interesting stuff going on here. The cinematography (done by Brandon Trost of Crank 2: High Voltage fame) is much more vibrant and interesting than anything else put out like this. Henry Jackman’s score is great, and the music selections are used for great humorous effect; it even manages to make Gangnam Style interesting again. Visual effects aren’t usually that great in comedies of this style, but this film deals with a lot more crazy stuff than those other films and I don’t think they’ve put enough money into them. Whilst some stuff looks OK, other parts feel like they were ripped from a cheap PS3 game.

This Is The End is the funniest comedy I’ve seen so far this year, and is a good time for anyone who enjoys this type of movie. It’s clear that these guys were just having some fun making a movie, and that fun they had translates onto screen perfectly. With a bit more polish and some added crazy, this could have been even better. But as it stands, I don’t think you’ll find anything funnier in cinemas right now. That is until The World’s End comes out.