Welcome to the Punch comes to us from Eran Creevy, the writer/director of the indie Brit flick Shifty, which is a great example of a film with a small budget but plenty of ingenuity. Now armed with a bigger budget and bigger stars, does his sophomore attempt live up to the promise his first showed, or is Creevy a one-trick pony? 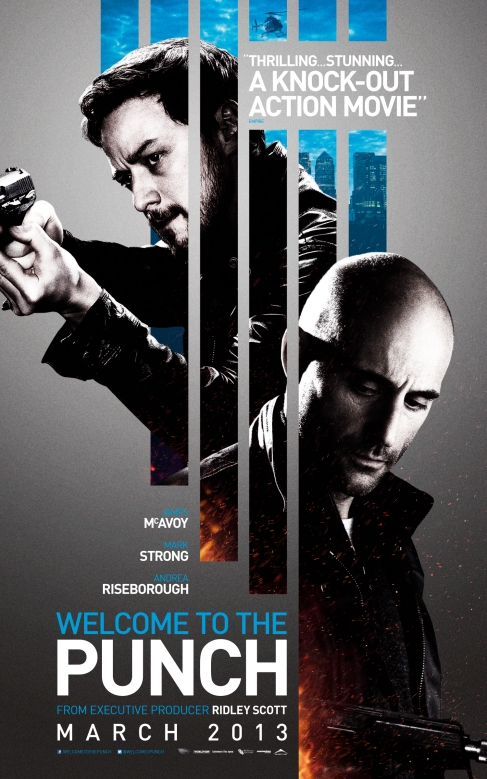 For about the first half of Welcome to the Punch, you get pretty much what you expect from a British crime thriller. It’s definitely not bad and better than most of them these days, but nothing you haven’t seen before. But about halfway through, some major plot shifts lifts the comfort of the plot from under you and sends the film on a much different path. There are some very fresh and inventive ideas thrown into a plot that is pretty standard, and keep the movie from getting stale. Even with the familiarity, the film is still pretty well written with some good dialogue and characterization. Whilst I think the ending could have been a bit better, this is still a brisk and entertaining tale that even manages to throw some social and political commentary in there.

Punch features a wide variety of well-known and not-so-well-known British actors that all deliver on what they need to. McAvoy, cast a bit out of type as a gruff, Dirty Harry-esque cop, shows he has range and can handle himself in a scrap. Strong, whilst playing the kind of role he can do backwards at this point, brings enough depth and emotion to an otherwise stock role that you can get behind him by the end. Riseborough continues her rise up the ranks here, and avoids the stereotypical role of women in movies like this whilst also having very good chemistry with McAvoy. Peter Mullan is also entertaining in his role, providing some comic relief whilst remaining serious throughout.

The visual style of the picture is far removed from Shifty’s gritty realism. Punch has a very slick look to it, punctuated by a sharp, blue colour scheme that adds a lot of flair to the action. The cinematography can get very frenetic during the fight scenes, occasionally swerving towards Crank-level energy without going bats*** insane. Whilst the film sometimes falls into the old edit-things-so-fast-it’s-hard-to-tell-what’s-going-on trap, the action is mostly discernable and well choreographed, whilst the music is suitably moody and pulsating.

Welcome to the Punch is by no means groundbreaking or challenging as a motion picture, but it packs a lot of (pun intended) punch. It’s a much better film that most films of its ilk these days, and proves that Creevy has a bright future in the film industry if he plays his cards right.