What can I say about Die Hard that hasn’t been said? It’s the pinnacle of action movies, a game-changing motion picture that influenced the action landscape forever and made Bruce Willis an icon. The following sequels, though never living up to the original, were also entertaining diversions. I even like the fourth one, ridiculousness and all. But is the fifth outing one worth gearing up for, or has John McClane finally run out of luck? 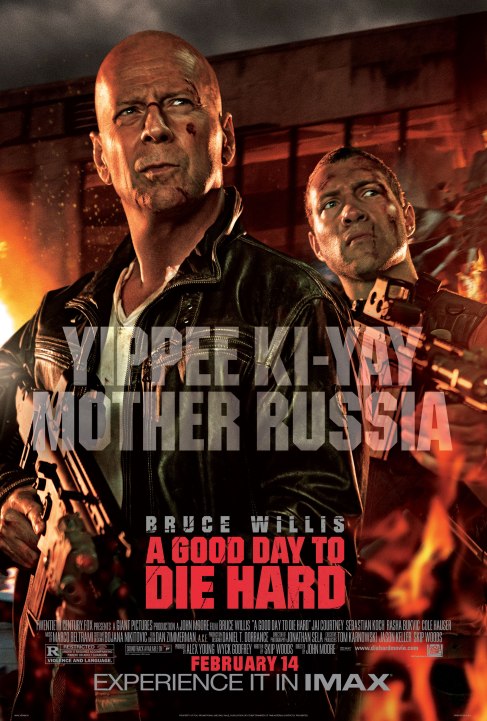 The plot of Die Hard 5 (I refuse to call it by that ridiculous title) is so bland, so banal, so utterly generic, that I’m struggling to remember key plot details just mere hours after watching it. After an incredibly slow start, the film finally kicks into gear but doesn’t keep up the pace. When there is action, it’s pretty run of the mill. When there isn’t, it is downright torturous. The film attempts to bring in a father-son dynamic between Willis and Courtney, but in the most half-assed overdone way. The constant bickering, the refusal to call McClane “Dad”, McClane always saving his son’s ass and not thanking him for it. It all just feels ripped from other movies; Indiana Jones and the Last Crusade this ain’t. At least the movie is short.

If you know what to expect from Bruce Willis these days, you’ll get exactly that. His portrayal of his iconic role feels half-baked, as if Willis doesn’t know what’s going on or doesn’t care. His one-liners are pretty weak 85% of the time; some of them don’t even make sense (“I’m not smart. I’m just on vacation” WTF?). He doesn’t even feel like John McClane; it’s just Willis being Willis for the umpteenth-bazzilionth time. Jai Courtney attempts to pick up the slack, but the character of McClane Jr is given so little personality that he has nothing to work with. The two’s chemistry is passable at best, never getting close to the kind of relationship Willis had with Samuel L. Jackson or even Justin Long. But the villain is good, right? The Die Hard franchise is known for its memorable cast of villains, from Alan Rickman to Timothy Olyphant (OK, maybe not Olyphant). And the villains here are…Russians. Nothing that special or memorable about them. They’re just Russians. The film tries really hard to make these guys seem evil and just fail. They even try to tread out a real-life tragedy in attempt to make them seem more villainous; that’s just lazy and disrespectful.

But what about the action? That’s what we come to see these movies for. Every Die Hard movie has it’s memorable action scenes, from as simple as jumping off a building to as ridiculous as crashing a car into a helicopter. Many took issue with Die Hard 4.0 for taking the action to ridiculous levels, and those people are probably going to be even more pissed with this one. The action here is preposterous and not in a good way. Once in a blue moon does the film do something interesting, but nothing that memorable. The John McClane of the original Die Hard would never have survived some of the s*** he pulls off here. Remember how much glass hurt him in the first movie? F*** that, he’s constantly crashing through the stuff here with barely a scratch! Combine the unimaginative action with constant shaky-cam and sloppy editing, and you’ve got yourself a bland action movie that hardly feels like a Die Hard movie at any point. All in a day’s work for hackmaster John Moore. Even the biggest hater of Die Hard 4.0 would be begging for Len Wiseman to come back after seeing this atrocity.

Die Hard 5 is a spit in the face of the franchise, an embarrassment that should be quickly forgotten about and never spoken of again. The film barely resembles its roots and just goes for generic thrills straight out of the Michael Bay School of Schlock Filmmaking. Willis has already said he’s up for at least one more. It can’t get any worse than this, right? Right?!