It seems the summer of 2019 is becoming a hot bed for movies where a single musician or band’s discography serves as a focal point for the narrative. We’ve already seen Rocketman and Yesterday give us cinematic extravaganzas to the tunes of Elton John and The Beatles, but instead of a flashy Hollywood number for Bruce Springsteen’s turn we instead get the indie Brit flick Blinded by the Light. Something of a spiritual successor to director Gurinder Chadha’s breakout hit Bend It Like Beckham, it too focuses on a teenager from a South Asian background living in England and finding themselves through a western pastime their parents disapprove of. However, even with those comparisons, Blinded by the Light does just as much to differentiate itself from Chadha’s previous work and the recent crop of musician-based films, and it’s those differences that make it stand out and proud. 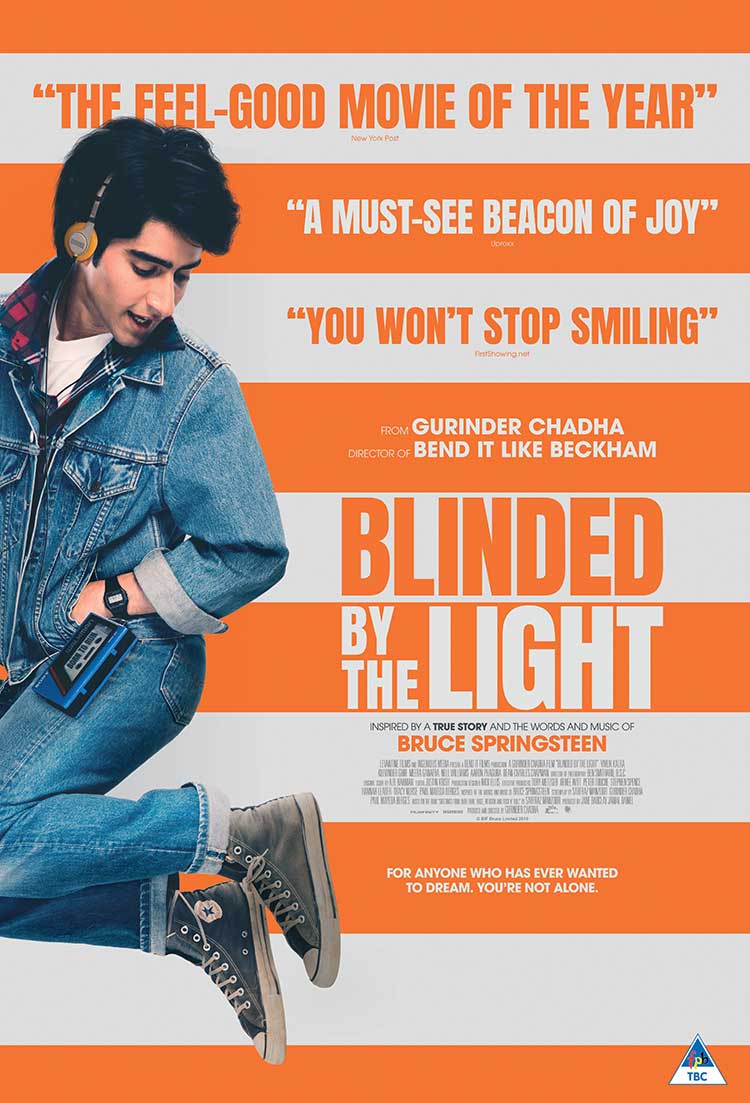 Based on the memoir by co-screenwriter Sarfraz Manzoor, Blinded by the Light paints a vivid portrait of a Thatcher-era Britain rife with unemployment, far right nationalism and xenophobia; a stark reminder that the country has been where it is now before. Much of the base plot should be familiar to anyone who has seen a coming-of-age story, but the particular way it expresses itself feels refreshing and true-to-life. Protagonist Javed’s journey from repressed Muslim boy to rebellious Springsteen stan doesn’t immediately solve all of his problems, and it acknowledges that his newfound passion doesn’t make him better than anyone else. After so many stories where these kinds of characters are portrayed as prodigies in a backwards community who have all their problems solved by a mantra, it’s relieving to see one where it recognises this kind of obsession cannot completely dominate one’s life, and should ring true to anyone who found a musician/author/filmmaker/artist that spoke so closely to them in their youth. This honest portrayal of fandom not only helps ease the film over its more formulaic plot elements, it emboldens the film’s ultimate message about how music can transcend all barriers and can inspire anyone to do anything.

For his leading debut, Viveik Kalra is perfectly suited to the timid and ingenuous Javed. He’s occasionally too naïve for his own good and Kalra is still clearly a relatively rookie actor (his performance isn’t helped by some occasionally clunky on-the-nose dialogue) but his sincerity and boldness propels his performance greatly. Aaron Phagura is also endearing as Javed’s fellow Springsteen fan Roops, and Nell Williams feels astutely cast as his civil rights activist love interest Eliza, whilst Dean-Charles Chapman (near-unrecognisable from his days as Tommen on Game of Thrones) is equally solid as childhood mate Matt. Rob Brydon adds some charming comedic relief as Matt’s father, and Hayley Atwell as Javid’s teacher adds that required dose of Dead Poets’ Society-like inspiration and encouragement. Even some of the smaller supporting roles, like David Heyman as Javid’s neighbour Mr. Evans and Marcus Brigstocke as Eliza’s conservative father, add a lot of welcome flavour. However, the film’s MVP is absolutely Kulvinder Ghir as Javid’s demanding father Malik. Though he fulfils many of the stereotypes of the traditionalist South Asian patriarch, there’s a depth and pain to his performance that humanises him, and the film never wisely paints him as an outright villain.

Just as much as the film captures the atmosphere of 80s Britain, it also captures it visually. There are plenty of films and TV shows set in the 1980s these days, but so many of them feel like an exaggeration of the period, whilst Blinded by the Light grounds the iconic fashion statements and music trends as close to reality as it can. There’s an authenticity to every detail of the design, and for every Flock of Seagulls hairdo and leg warmer on display there’s a Margaret Thatcher poster and some Islamaphobic graffiti that brings it all back to reality. There are plenty of other great 80s tunes on the film’s soundtrack, but obviously there is a heavy focus on Bruce Springsteen. Featuring many of his period-appropriate hits, the film accentuates The Boss’ words through its visual storytelling by letting them speak for themselves, highlighting how his lyrics speak to Javed’s life without being cloying. I can see not only fans of Springsteen getting a kick out of hearing his songs in a new light, but also younger viewers being turned on to his music through it; it certainly has had me playing “Born to Run” on repeat since watching it.

Blinded by the Light is a joyous summer romp that celebrates creativity, freedom, and learning to define one’s own destiny. Its reflection upon Thatcher’s Britain feels raw and more relevant than ever, and uses Springsteen’s words to deftly dispute the conservative mindset of the era. It perhaps has some wind taken out of its sails by how familiar many of its narrative turns are, especially to Chadha’s previous work, but everything new it has to say absolutely needs to be heard. If you need a break from either the glut of Hollywood blockbusters and/or the degrading political climate, this is exactly the feel-good flick you need in your life right now.

One thought on “BLINDED BY THE LIGHT – an Alternative Lens review”