It’s hard to believe that in just five years, John Wick has risen up from its humble beginnings as a sleeper hit to become one of the premier action franchises that every other film in the genre is trying to copy. They are admittedly trashy experiences at heart, but they present it all in such a slick and immaculate fashion that it never once feels downmarket; they’re like fast food made by gourmet chefs. Now reaching its third instalment and with a Latin subtitle for good measure, the stakes have never been higher for Mr. Wick. Will the world’s greatest assassin come out on top again, or has this seasoned warrior finally run out of bullets? 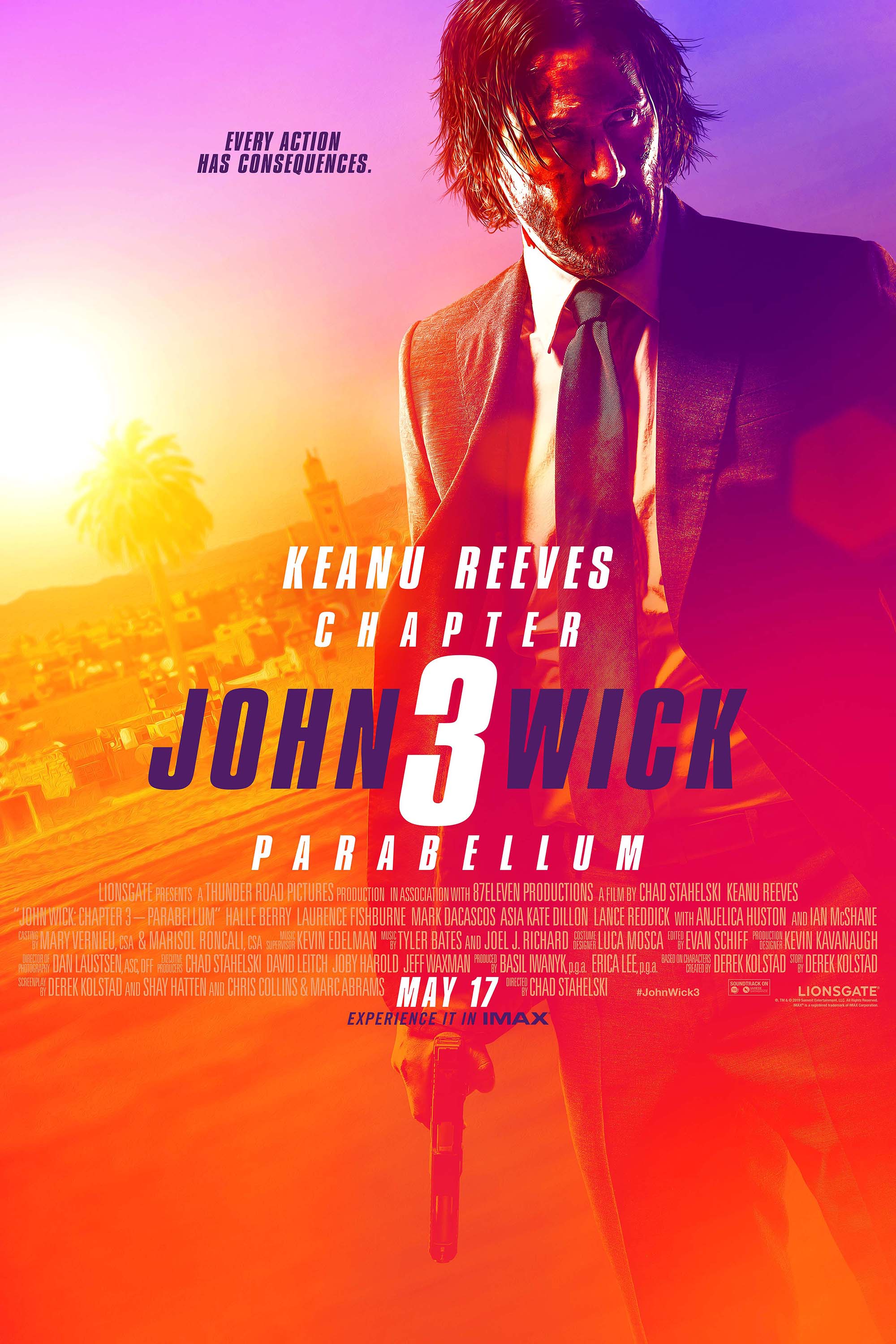 Picking up immediately after the shocking conclusion to Chapter 2, Parabellum finds John Wick left with little but his wits and a few small favours. That’s not to say this third instalment is a back-to-basics adventure. On the contrary, the film only further expands the mythology of the assassin underworld, and even answers some of the questions from the previous films (like finally explaining how the gold coins actually work). With that said, whilst that expansion adds whole new layers to the story world, there are signs that the concepts are starting to be stretched thin. With every new conceit introduced, it only comes with a slew of further questions, and there are only so many times you can excuse an illogical moment with rule of cool before you’re starting to abuse the system. Thankfully there’s nothing that completely breaks that suspension of disbelief, but at this point I’d rather they stop trying to dig deeper and simply find new ways to explore the concepts they’ve already introduced; you can only spin so many hats before it all falls apart. Otherwise, the storytelling and pacing is just as efficient and smooth as ever with nary a scene wasted, and with plenty of room made for this story to keep on strolling along.

By this point, John Wick has pretty much surpassed the like of Neo and Theodore “Ted” Logan to become Keanu Reeves’ most iconic role in a storied career full of classic characters. Whilst we do learn a little more about Wick’s backstory, he’s still the stoic single-minded badass we’ve come to love, and I wish Reeves could just play this role forever; I mean, Tom Cruise is two years older and doing crazy sh*t like this on the regular. The returning cast is as fantastic as ever, with thankfully more given to Lance Reddick’s Charon and Laurence Fishburne’s Bowery King this time around, but it’s the new faces that really steal the show in Parabellum. Halle Berry is finally given the action movie role she deserves and kicks all sorts of ass with her canine companions, though her screen time is fairly limited; perhaps a spin-off is in order? Asia Kate Dillon makes for a compelling villain as The Adjudicator, sitting out the action but still leaving a strong impression with their restrained delivery and icy glare, making for an antagonist I hope returns so they and Wick can have a proper showdown. However, the film’s standout is easily Mark Dacascos as the exuberant Zero, delivering a performance that is equal parts scary and funny and more than keeping up with Reeves on the action front. With this role alone, Dacascos makes a strong case for a second chance at stardom. Top it all of with fun smaller turns from the likes of Angelica Huston, Jerome Flynn and Jason Mantzoukas, and this is one diverse and stellar cast for an action movie.

The bonkers action set pieces are what everyone ultimately comes to a John Wick movie for, and Parabellum does not disappoint in offering yet another dose of ultraviolent goodness. The action kicks in practically from the word go, and though much of the essential gunplay and fistfights play out as expected, there’s still loads of new tricks the third chapter has up its sleeves. From a gruesome yet hilarious showcase of knife throwing to entire action sequences on motorcycles and horseback, it’s hard to think where else this franchise can go without diving into Fast & Furious territory, but I’m sure the filmmakers will think of something. Otherwise, from the moody neon-lit cinematography to the brooding score, there is no mistaking this for anything other than a John Wick movie.

John Wick: Chapter 3 – Parabellum delivers more of what you want from the franchise without innovating in any particularly notable way. This is about as polished as action movies come, and expecting any more out of this film almost feels like nitpicking at this point, but this franchise needs to avoid resting on its laurels. It already does everything to such a high standard that it makes most other action movies look lazy by comparison, but even a five-star restaurant with a perfect selection of dishes needs to shake up its menu to stay relevant. For the moment, Parabellum gets by on its style and execution, but should another instalment come around, what I really want it to do is surprise me.