In the past few years, many have been quick to remark that the administration of George W. Bush was a rosy time in comparison to the chaos of America’s current political landscape, but on further reflection that couldn’t be further from the truth. The Dubya years were just as rife with questionable decisions for selfish gains whilst innocents paid the price. The big difference is that they weren’t blatant about it, and that is arguably the greater evil. So in these times of uncertainty, a reflection on those years with today’s hindsight does feel necessary, and who better to have as the focal point than Vice President Dick Cheney? With an all-star cast and sharp satirist Adam McKay at the helm, Vice has everything it needs to be the All the President’s Men of this generation. So why isn’t it? 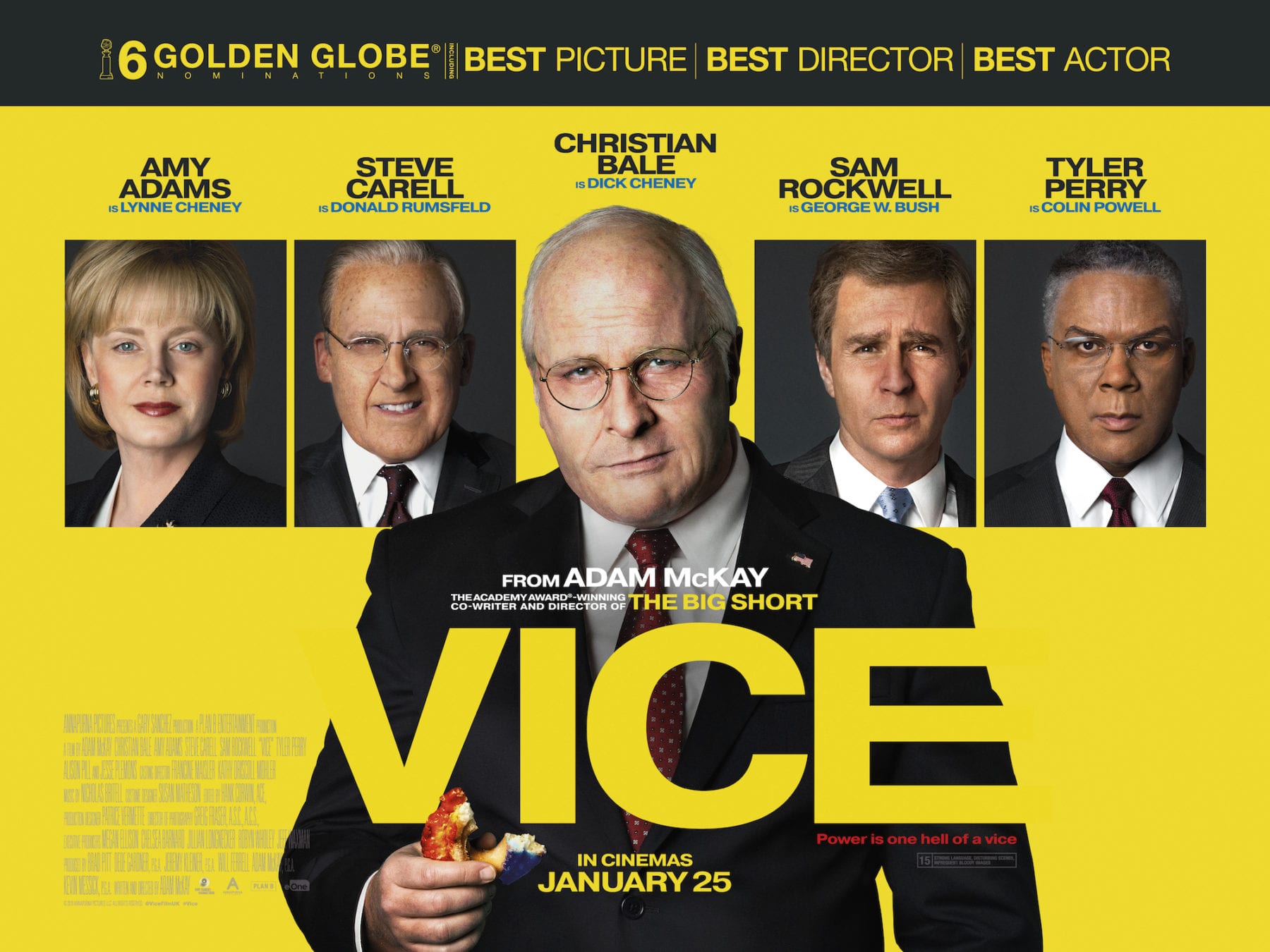 Vice covers a wide swath of Cheney’s life in and out of his political life, helping to put into perspective a figure easily demonised because of his actions out of context. Certain key details feel brushed over, but the narrative does a good enough job of focusing in on the development of Cheney’s strategic mind and the reasoning behind his quest for power. The story is presented somewhat non-linearly, and whilst the storytelling never gets muddled per se it doesn’t always flow as naturally as it should; there is clearly a lot on the cutting room floor here. Where the film really struggles to connect is in finding the right tone. McKay applies a lot of similar techniques to his directing on The Big Short, utilising fourth wall breaks and non-sequiturs to explain political jargon, but it never quite gels as well with the darker subject matter and grounded aesthetic the film is otherwise going for. It feels caught between being a serious docudrama and a farce, and despite both elements separately containing some inspired moments, it ultimately feels confused and lacking in direction. When the film does hit, it hits hard, delivering sharp and often absurdist humour to bring a light touch to some very diabolical situations. Then again, when you’re bouncing around from farcical scenes like Dick and Lynne Cheney acting like literal Shakespearean villains to horrifying details about how the administration in retrospect did more to escalate global terrorism than prevent it, it is often difficult to find your bearings.

Every time Christian Bale puts himself through some incredible exercise in method acting transformation, everyone loves to stop and gawk about how much weight/muscle he has gained/lost. His metamorphosis into Dick Cheney is no exception, but beyond the physical his characterisation of the political puppet master is amongst his best work. Bale certainly indulges himself in playing up Cheney’s less desirable personality affects, nailing his gruff tone of voice and stoic, disconnected complexion, but he still brings a certain vulnerability and even charm to the role; you can understand why people listened to this guy and how he got so far in politics. Amy Adams is equally capable as Cheney’s wife Lynne, demonstrating a viler and more conniving side to Adams than we’ve ever seen from her. Carrell is certainly here to play as Donald Rumsfeld, but he can’t help but feel a tad miscast; he might have made more sense in a version that more overtly comedic. Sam Rockwell delivers a damn good George W. Bush impression, but the film actually gives him very little to do. Sure, the point of the film is to show how Dubya was just a pawn in Cheney’s own plans and actually did very little of note himself, but to have such a charismatic actor perfectly cast as a world famous leader and having him be a mere prop can’t help but be disappointing.

The rest of the cast is rounded out with stellar performers in even the tiniest roles, but they too often feel out-of-place or underutilised, and the oddest of all is Jesse Plemons. In an odd framing device, Plemons narrates much of the proceedings by filling in time jumps and explaining political terms to the audience, but his presence confuses just as much as it clarifies. His character and intricate knowledge of Cheney’s life is built up as some sort of twist, but the reveal itself is underwhelming and all that build-up only distracts from the important information.

I agree with McKay’s take on Dick Cheney in principle, but as a movie Vice only barely passes muster because of the flaws in its execution. Much in the same vein as previous Bale/Adams collaboration American Hustle, it is a film with a lot of great individual pieces that fail to add up to a satisfying whole. Bale and Adams are fantastic as the Cheneys and deserve some recognition this awards season, and when McKay is on point with the satire the film really comes alive for stretches. However, the final product never quite adds up to the politically charged gut punch it wants to be. The narrative is scattershot and the tone unfocused, often coming across more like an off-the-cuff screed rather than a finely detailed takedown rebuttal. I don’t know if McKay got a little intimidated by the material or just couldn’t trim the film down to something digestible in the edit, but this does not feel like his best work.