Movies that are heavy on twists are incredibly hard to talk about, and Split has several doozies that I’d rather not spoil. However, it’s equally hard to sell how great this movie is without doing so, so please take my word for it that Split is not only M. Night Shyamalan’s best movie in seventeen years but is also one of the best high-concept horror/ thrillers of the decade, and so I’ll try to tread very carefully in this review around a minefield of spoilers. 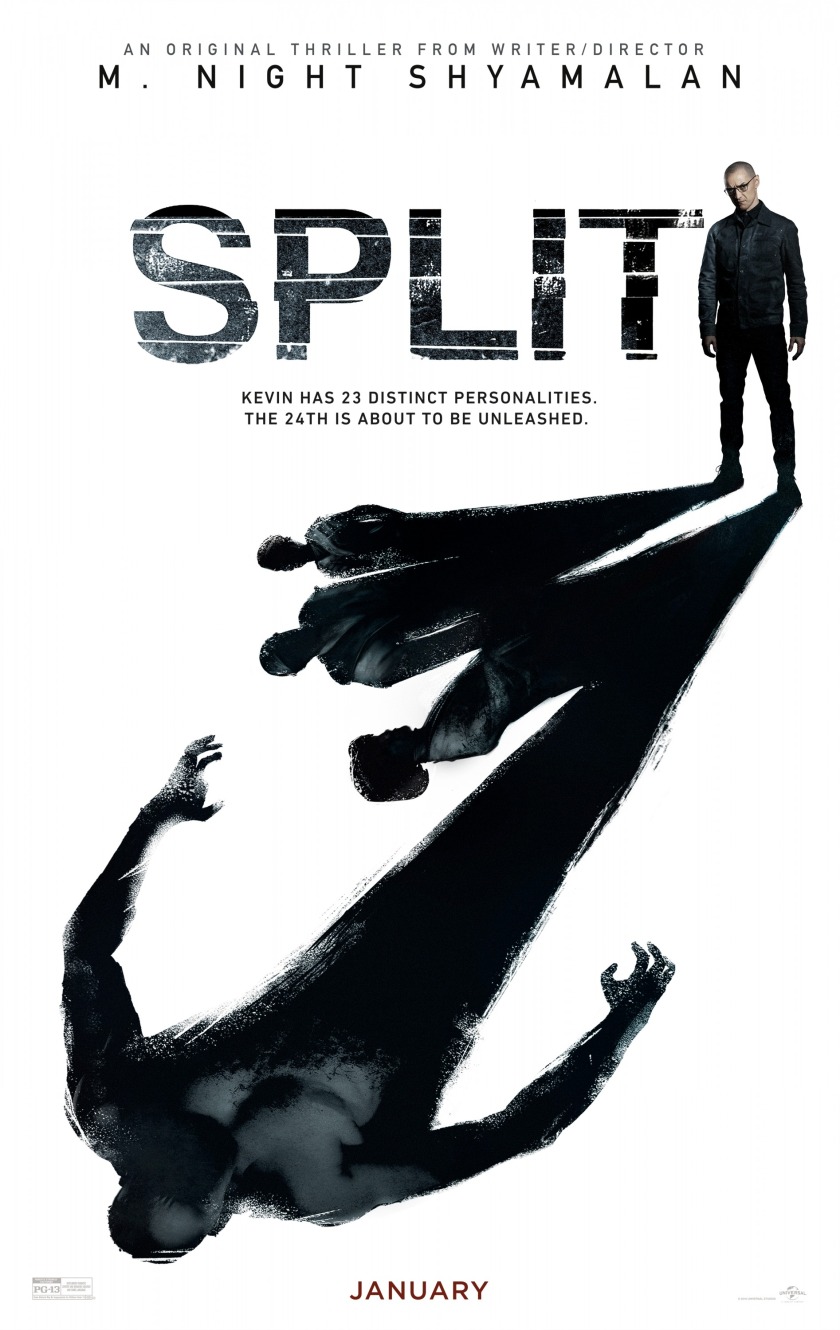 Like all great suspense movies, Split has a deceivingly simple premise that gradually grows and grows as the story progresses. What simply starts as three girls held captive by a madman gradually evolves into something far bigger than a simple escape thriller. The unpredictability of Kevin (McAvoy) and his fragmented identities constantly keeps the audience on their toes, his shifting moods meaning the difference between safety and danger for these teens. The film does jump around between several plotlines including flashbacks to the childhood of Casey (Taylor-Joy) and psychologist Dr. Fletcher (Buckley) dealing with Kevin’s case, which in the moment feel unnecessary but as the film progresses they prove to be anything but; still, there might have been a better way to weave them in without stopping the main plot in its tracks. There are a lot of moments like that in Split where it tests your willingness to stick with it, especially in the third act when it really starts to go off the rails, but you are rewarded for your patience with a final note that completely annuls every inconsistency and bizarre moment up until that point. The film reminded me a lot of 10 Cloverfield Lane in how it handled its climax but, whereas that film’s ending ultimately cut off the legs of an otherwise excellent picture, this one pays off because it fits more naturally into what came before and actually answers questions rather than raising them. I can’t say much more, but I will say that if you are a fan of Shyamalan’s early work then you are going to love Split.

Every actor wants a chance to show off his or her range in a single movie, and James McAvoy gets the Valhalla of chances to do so in Split. Every single personality inside Kevin’s head is made completely distinct through the way McAvoy adjusts his accent, cadence, posture, body language, etc. At certain points, you don’t even need the costume changes to recognise which identity is in control, but at other times you are unsure as to whether one of his more innocent personalities is in control or one of his darker ones is simply imitating them, and that’s what ultimately makes him so terrifying. It instantly ranks up there with McAvoy’s best performances and sets a new bar to cross for actors tasked with playing multiple characters; Tatiana Maslany, you’ve got some new competition. But Kevin doesn’t steal the entire movie for his twenty-four selves, because Anya Taylor-Joy as Casey holds her own against him every step of the way. One of the best final girls in horror since You’re Next, Taylor-Joy continues to prove herself as a great new talent in a role that could have easily felt generic and weak. Those flashback may be intrusive but they give enormous depth to the character that would have left her flat otherwise, and the greater amount of tension to the situation they provide gives the film another whole layer to dissect. It’s a pity that Haley Lu Richardson and Jessica Sula aren’t afforded anywhere near that amount of character, but ultimately the film isn’t really about them; they serve their purpose and they do so exceptionally for the most part. Betty Buckley, best remembered as the crazy old lady from The Happening (“You eyein’ my lemon drink?”), rounds out the cast well as Kevin’s psychologist who helps provide much of the context that hints at the greater context of the piece. Suddenly, she seems far less off-key now that she’s not playing opposite a befuddled Mark Wahlberg.

Shyamalan’s recent directing has been known for its odd quirks and fumbles, but here he has finally again grasped the art of filmmaking and has crafted one hell of a slick thriller. The movie looks haunting and grimy thanks to the excellent work of It Follows cinematographer Mike Gioulakis, evoking a similar haunting sense of dread in that picture but with Shyamalan’s own penchant for off-kilter shots. The main set is minimal but full of detail and character; so much can be extrapolated about Kevin’s personalities from just analysing the decorations. West Dylan Thordson’s is minimal but adds to the uneasy tension of the piece, and by the film’s climax it all perfectly coalesces with Shyamalan’s familiar classic style. If you’ve seen the movie, you might know what I’m talking about there.

The Visit was Shyamalan’s stepping-stone back to the light side, but with Split he has now fully reaffirmed he is back in business. This is a truly unique movie that reminds you why filmgoers fell in love with the director all those years ago: high concept ideas achieved through simple but effective filmmaking and a fine attention to theme and suspense. The performances by McAvoy and Taylor-Joy alone would have made this film worth watching, but those last few minutes skyrocket this movie from good to pretty damn awesome. If you aren’t as into Shyamalan’s films even before his legendary bad streak, you may not be convinced. But if you have even the slightest fond memories of his early work, no matter how much his lesser works have burned you in the past, you owe it to yourself to watch Split.