I’m not usually into films on the dark side, but Denis Villeneuve knows how to hit that spot just right for me. His films, such as Prisoners and Enemy, delve into some pretty nasty subjects and have very pessimistic views of the world, but they never go far enough to become depressing or uncomfortable. Sicario follows this trend and, whilst not Villeneuve’s best work, it’s still a fantastic piece of cinema that you should definitely check out. 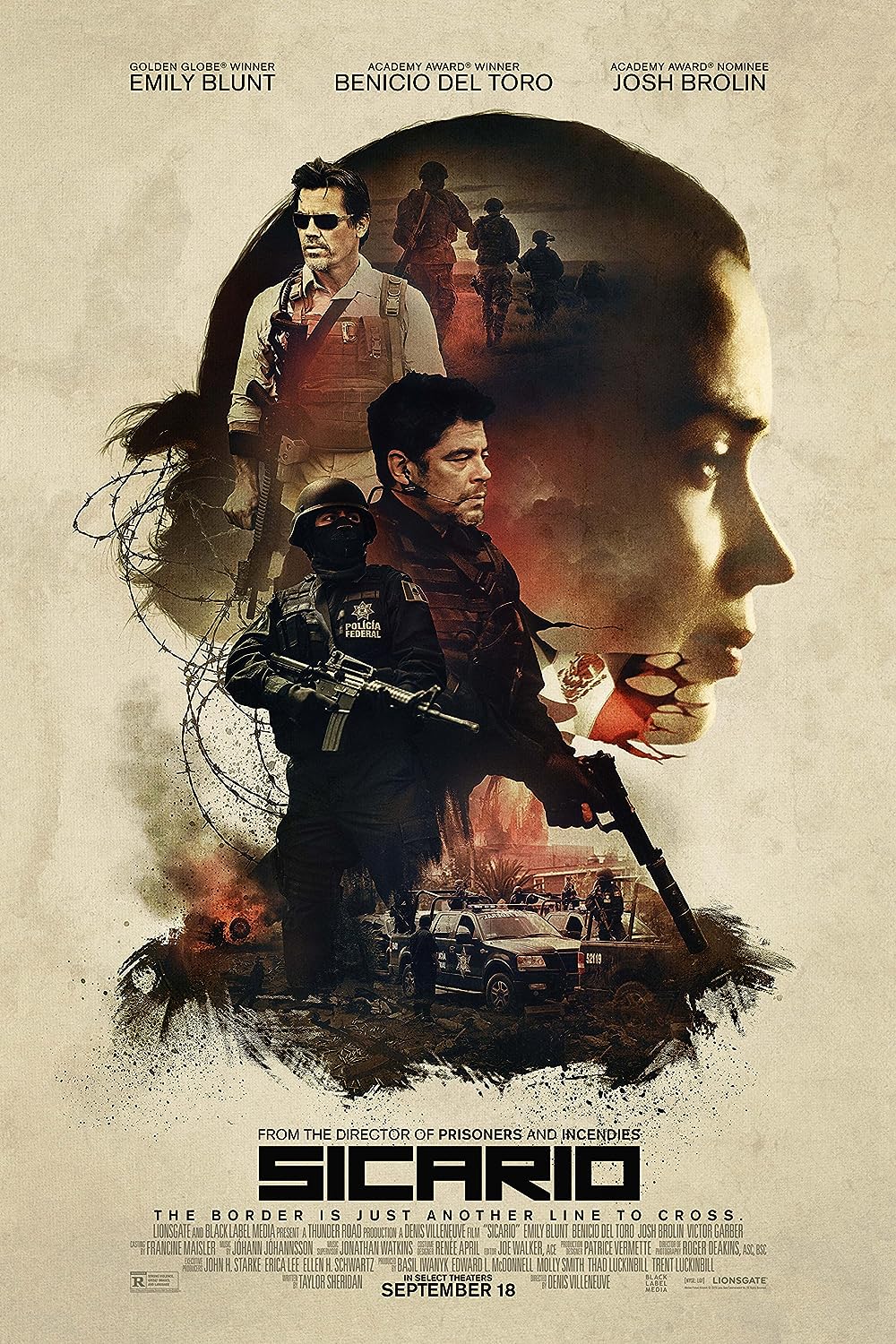 Sicario doesn’t spoon feed you its plot, leaving a lot of scenes out of context and generally keeping the audience in the same state-of-mind as protagonist Kate Macer (Blunt). It does have the side effect of making the story a little hard to follow in the first two acts, but as revelations are made the various bits and pieces fit together to create a strong whole in retrospect. But plot isn’t Sicario’s main focus anyway; it’s all about character and environment. The film’s pacing and suspense is excellently tuned, slowly ramping up tension and anxiety before exploding into brief bursts of violent action. A lot of this is thanks to the sparse dialogue, letting the visuals and sound effects carry the suspense, but when the talking does start the writing is surprisingly witty and biting; there are plenty of laughs to be had, but most of them will be nervous ones. Sicario has a very bleak outlook on justice, essentially being a story about warring corruption on both sides of the law, but it thankfully never beats you over the head with it. It’s a very morally grey film with no real winners or losers, but despite this it remains a satisfying and deeply rewarding watch. Just don’t go in expecting to have a lot of fun.

Villeneuve really knows how to get the best out of his actors, and here he’s assembled a quality cast to work with, especially the three leads. Emily Blunt further demonstrates her incredible range as the by-the-book agent Kate, remaining a tough and capable character but not one who’s averse to looking scared or intimidated. Blunt gets across a lot with very little dialogue, letting her expressive face do most of the work, and it’s a performance that ranks among with her best. Josh Brolin’s Matt is certainly a welcome presence, mixing laid-back jokiness and stern brutality to create a character that can shift from friendly to threatening without so much as blinking; he’s almost like “what if The Dude was a government dick?” But it’s Benicio Del Toro’s Alejandro who’s the really eye-catching character. Essentially taking over the movie for a good chunk of the third act, Del Toro’s raspy voice and cold demeanour help create a character who is threatening in mere presence without being cartoonish; you know he’s up to something, you just don’t quite know what. His relationship with Blunt is interesting and layered, with neither ever fully trusting the other, and their final scene together is so simple but done to perfection.

Sicario is one of the most gorgeously grimy films I’ve ever seen, and that’s mainly thanks to the cinematography of the great Roger Deakins. The film’s settings of US border states and Mexico are dirty and barren, but Deakins shoots the film in such a way to somehow make it look appealing. The aerial photography is especially good, with impressive shots of landscapes made to seem haunting, and the film also manages to accomplish the task of shooting an action sequence mostly in night vision and not make it look incomprehensible. Johan Johanssen’s chilling score is also thoroughly excellent, further adding to the film’s palpable tension, as well as some effectively brutal sound design.

Like Villeneuve’s other works, Sicario is not a fun time at the movies but it is an engaging one. It’s a thoroughly rough experience, but never so much that it becomes melancholic, and its brutal impact and style makes the anxiety-ridden ride more than worth it. It’s a must watch for Blunt and Del Toro’s performances alone, but Villeneuve’s sure-handed direction ultimately makes him the real star of the show and I can’t wait to see what he can do with a property like Blade Runner as his project after next.