The folks over at Laika certainly like to avoid the conventions of the typical animated film (at least tonally and stylistically). Film such as Coraline and ParaNorman are just as creepy as they are charming, but that used to more common than you think. Back in the old days there were plenty of films aimed at kids that were pretty disturbing, like Time Bandits or Return to Oz, and it’s good to see that gap in the market filled. The Boxtrolls certainly checks off many of Laika’s usual criteria, but is that enough to make it good? 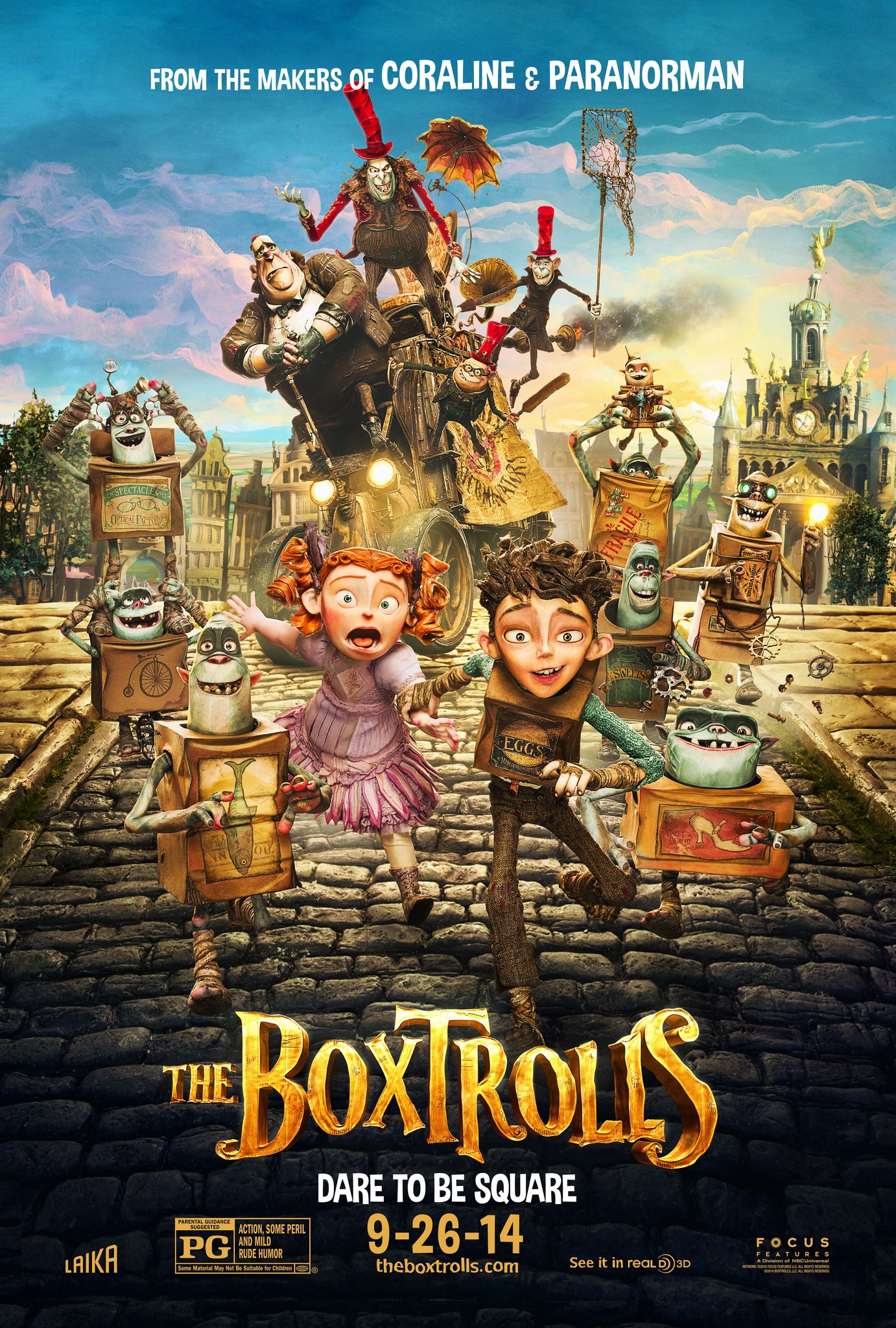 Much like how the Boxtrolls themselves are strange creatures with good hearts, the film is an odd tale but with a sweet and simple core. The story flows like a fairy tale, quickly bringing you up to speed on its world and getting the story rolling. It does this job a little haphazardly, as I felt the first twenty minutes or so were a little slipshod with the exposition, but once the ball (or should that be box?) gets rolling it all comes together quite well. The story doesn’t stray too far from the conventional, but what helps set The Boxtrolls apart is its surprising use of subtext and self-deprecation. Elements like the villains’ henchmen questioning their own morality, said villain’s obsession with class, or the upper class’ ignorance of the obvious problems, there is a lot of cogs working behind the scenes that should amuse the parents in the audience whilst their kids are distracted by the more surface-level humour. And really, that’s how a good family film should be done; not with out-of-place pop culture references to “appeal” to grown-ups and confuse the children, but by making it work on multiple levels to where kids watching it today will grow up and realise the deeper messages. All in all, The Boxtrolls delivers a fun tale and is the true epitomization of “fun for all the family.”

A good animated film casts actors based on their vocal suitability to the character rather than relying on name recognition, and The Boxtrolls thankfully does the latter. Isaac Hempstead-Wright is a likable protagonist as the voice of Eggs, though to be fair he’s arguably the least interesting of the main characters but that’s only because the rest are so bizarre and colourful. Elle Fanning’s Winnie is a charmingly odd piece of work, combining innocence and sophistication with the disturbing thoughts of a potential sadist, whilst Jared Harris is delightfully amusing as the bumbling aristocrat who’s own poshness makes him hilariously ignorant. Ben Kingsley does his best Ray Winstone impression as Snatcher, the sexually confused villain who pines to be a nobleman, whilst Richard Ayoade and Nick Frost consistently steal the show as the stooges who try to convince themselves that they’re not stooges. Tracy Morgan is unrecognisable as Snatcher’s third and disconcertedly feral lackey, whilst Simon Pegg has a brief but fun role that I won’t spoil.

Laika do their best to keep the magic of stop motion animation alive, and here they have once again fabricated an imaginative but spooky world. The Boxtrolls themselves have a very simple but unique and ingenious design to them, the city of Cheesebridge combines the rustic aesthetic of British architecture with the warped sensibilities of German expressionism, and the animation itself is seamless and a wonder to see in motion; not once did I see through the trick.

The Boxtrolls is a quirky and highly enjoyable effort from the folks at Laika, crafting a simple tale about acceptance that has plenty of deeper layers for those who wish to dig. It’s been a stellar year for animation thanks to the likes of The LEGO Movie and How to Train Your Dragon 2, but please don’t let this gem slip through your fingers. I’d say much younger or sensitive kids might find some of the imagery a bit much, but if you’re child is of reasonable age and ready to take on something a little more challenging, then by all means take them to see it. Hopefully you’ll enjoy it too, just maybe for different reasons.