Writers: Mark Bomback (Unstoppable) and Rick Jaffa & Amanda Silver (Rise of the Planet of the Apes)

I don’t think many predicted that Rise of the Planet of the Apes would end up being as good a movie as it was. Despite the swells of other unsuccessful reboots and the stench of Tim Burton’s failed remake still fresh, Rise ended up being both a fun summer blockbuster and a surprisingly smart and tender sci-fi story. Now the adventures of Caesar and his apes continue in Dawn of the Planet of the Apes. Are apes together strong, or should this movie be darned to hell? 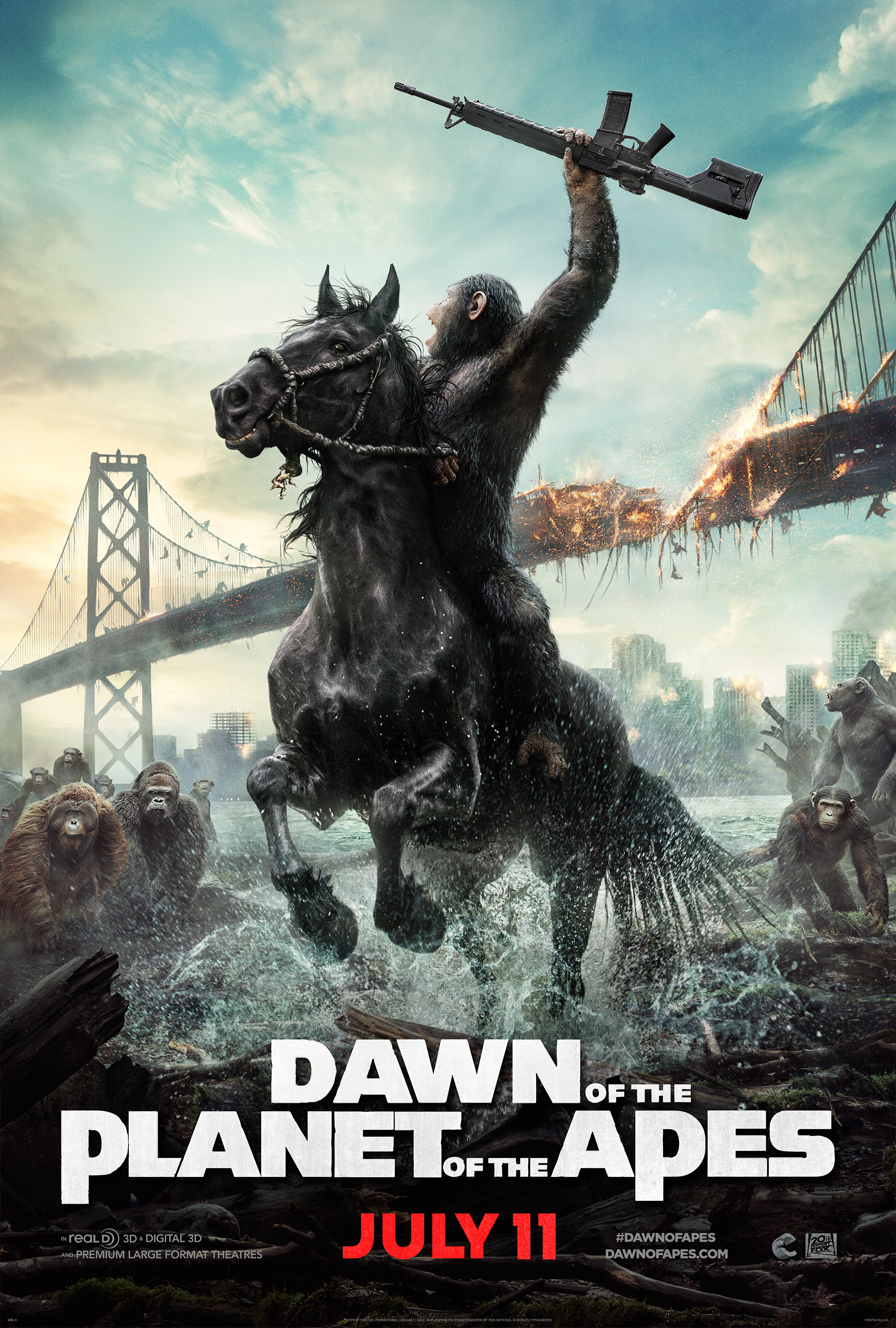 Set ten years after the events of Rise, Dawn is much bleaker than its predecessor, but hope still shines through; by the film’s close, we are closer to where the original Planet of the Apes began but still with plenty of room to grow. The story and setting is far more dynamic and interesting than the first, expanding and adding to the themes explored in Rise, but what Dawn truly nails is something few movies rarely even dare to do: moral ambiguity. Unlike Rise where the lines in the sand were clearer, Dawn’s sense of morals are far blurrier; much like Caesar himself comes to realise, it is not as simple as “apes good, humans bad”. Every character’s motivations feel justified, even when they commit horrible acts, which creates for far more interesting drama and tension. Whereas the initial seeds of the story suggest it could easily become clichéd, the film regularly avoids the obvious and crafts a narrative that is both gripping and exciting. The film is perfectly paced, moving from heartfelt drama to rip-roaring action seamlessly, before reaching a very well-judged ending that is sombre and foreboding yet somewhat hopeful as well.

Andy Serkis is the unrivalled King of Performance Capture at this point, and once again he delivers a fantastic performance as lead ape Caesar. The character has grown from fearless rebel to wise leader, and Serkis imbues Caesar with just as much emotion as any of his human co-stars. All of the other apes are well portrayed as well, but special mention must go to Toby Kebbell for his terrific performance as the blood-hungry Koba. Jason Clarke leads the human cast this time around and, whilst not getting as much focus as James Franco did in Rise, he is certainly more relatable. Keri Russell and Kodi Smit-McPhee do fine work as well, though their screen time is fairly limited. Gary Oldman’s presence is also small, but he squeezes every moment for maximum impact, making what in most movies would be a stock arsehole character into something far more human and understandable; a brief scene where he sees old pictures of his family is heart-breaking and just one of the film’s many great examples of visual storytelling.

The effects that went into creating the apes in Rise were impressive, and the technology has only improved. Whether showing hundreds of them or an extreme close-up on one, the attention to detail done here is astounding; some of Weta Digital’s best work for sure. The film’s production design is well executed, often reminding me of the mossy world of The Last of Us, which combined with the inventive cinematography and Michael Giacchino’s wonderfully classic score creates for an engrossing atmosphere that most films can only dream of.

Dawn of the Planet of the Apes does what sequels should do: it takes the concepts of the first film and builds upon it, creating a grander story not just in scale but also in execution. Like Rise, it has everything you want from a summer movie in terms of entertainment value, but also backs it up with smart writing and a good heart. It’s one of the best sequels in recent memory and also one of the best films of the summer. Considering the quality of the films so far, this franchise can take as long as it wants to reach that inevitable moment when George Taylor steps out of his spaceship and into the world of these damn dirty apes.