Sigh. I’m tired, dear readers. I’m exhausted and I can barely comprehend what I’m writing at this moment. I just want to go to bed. Not because I’ve done anything physically stressful. Because I just sat through nearly three hours of Bay-hem and my mind is frazzled. But I’d best get my thoughts out now whilst they’re fresh, because before long most of this movie will have probably escaped my brain. 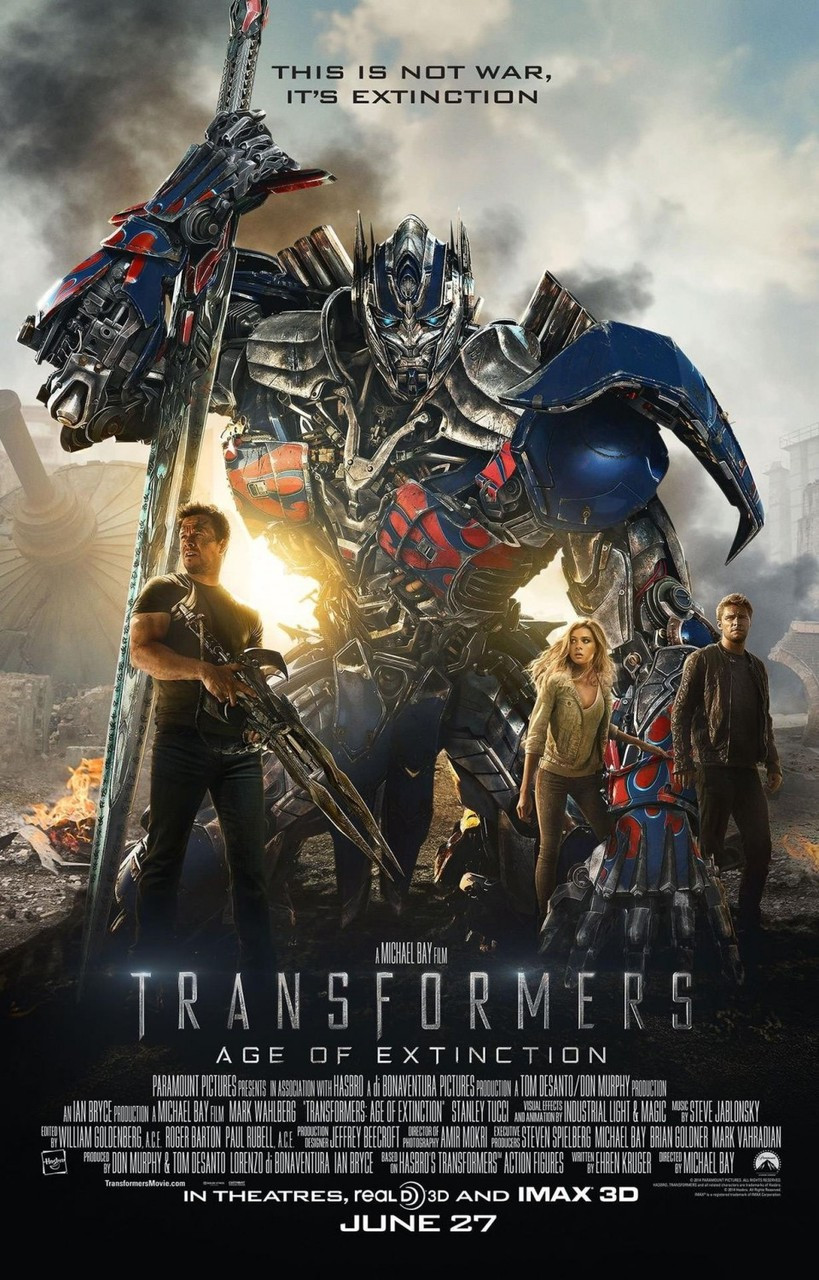 I’ll give Transformers: Age of Extinction this much: it perfectly captures the sugar-infused insanity of a child playing with his toys whilst rambling some nonsense story he’s making up as he goes. That’s how the plot of this fourth instalment feels: haphazard, thrown together, needlessly complicated, filled with clichés, derivative of every other sci-fi film on the market, and without any sort of internal logic or consistency. As I write this, I got out of the theatre less than an hour ago and I can only recall the barest of plot details because most of the film’s unforgivably brutal runtime is just filled with noise. The movie just refuses to end, bombarding you with everything it’s got even when there’s nothing left to throw. Even with the constant carnage, the film just becomes boring as the plot flimsily connects from one overblown action set piece to the next with only the quickest and laziest breaks for plot exposition and character development. I could go into far more detail, but my brain hurts too much for me to bother. If you’ve seen one Transformers movie, you’ve seen them all, so just expect the obvious but with even more OTT bombast.

The bag-wearing lunatic formerly known as Shia LaBoeuf has finally departed the franchise, leaving the post of “unnecessary human protagonist” to be filled by none other than Mark Wahlberg. Whilst having basically nothing but bare bones to work with, Wahlberg does his best to keep the movie alive but he ends up falling back on a lot of his old tricks; he’s far less obnoxious than LaBoeuf, but also far less dynamic. Nicola Peltz might be the best lead actress of the series so far, but she’s also the least well-written character of the lot. She’s is basically there as eye candy and as something to be rescued; when you’re making Megan Fox look like a better-rounded and more three-dimensional character, you are seriously failing. Equally pointless is Jack Reynor, whose relationship with Wahlberg can basically be summed up as, “I hate you. I hate you. I hate you. Wait, now I like you”. The villains fair a bit better; Kelsey Grammer manages to be a genuinely threatening presence and, surprisingly, the most well defined character. Stanley Tucci is basically playing Evil Steve Jobs (which some may say is the same as regular Steve Jobs), and like in everything he’s in he gives it his all even in the most ludicrous of situations, and also luckily manages to avoid embarrassing himself John Turturro-style. And that’s an impressive feat considering Age of Extinction has some of the worst dialogue I’ve heard this side of a Twilight movie (“Autobots, I vowed to never kill a human, but whoever is responsible for this is going to die.” A bit contradictory, eh Optimus?). As for the Transformers themselves (oh yeah, they’re still in this movie), they just feel like afterthoughts at this point. Peter Cullen still does as good a job as always as Optimus Prime, but the awful dialogue and inconsistent characterisation of the role just ruins it. Bumblebee feels pointless now without LaBoeuf around, John Goodman’s Hound won’t shut up, Ken Watanabe’s Drift is a racial stereotype bordering on offensive, and both Galvatron and the Dinobots are completely wasted. The only interesting new Transformer is Lockdown, a Boba Fett-like rogue with no allegiance and a bad attitude. Pity he gets nowhere near enough screen time.

Do I really need to describe at this point how a Michael Bay movie looks and sounds at this point? Oversaturated colours, sweeping cameras, explosions that look more like fireworks, gratuitous product placement, pervey shots of women’s legs, slow motion, clanging metal, you name it. Bay brought his entire toybox to the party and just threw it on the floor. You know what to expect, you get it in enormous spades, but there is some much of it that the film becomes oversaturated. Do I need to say more?

The first Transformers film is still a guilty pleasure for me; it’s stupid, but not too stupid. This instalment is nowhere near as bad as Revenge of the Fallen (still easily the worst Hollywood blockbuster I can think of), but it’s so monotonous and dull that it makes Dark of the Moon look like a breezy 90-minute romp. The story makes no sense, the characters are bland and/or annoying, the action is just more of the same but bigger, and did I mention that it’s NEARLY THREE HOURS LONG?! If you like the Transformers movies, fine. Go munch on your popcorn and have fun. But I implore everyone: it doesn’t have to be this way. Movies can still be mindless fun and not have to be this insulting. I’m all for movies about giant robots riding on giant dinosaurs that breathe fire and can fly. But you CAN make a movie about giants robots riding on giant dinosaurs that breathe fire and can fly AND give that movie a well-structured story, interesting characters and good balance between action and drama if you just try and put the effort in. The problem is that nobody can be arsed when you can make billions without even bothering with the second part.

“Is he hiding in that barn over there?”