Following up on a huge success is a daunting task no matter what field you’re in. After being a prominent figure on TV for a while with the likes of Family Guy and American Dad, Ted was the feature debut of Seth MacFarlane and it was a glorious one at that. It was funny, endearing and was a box office smash with a sequel on the way. But before returning to familiar ground, MacFarlane has decided to venture out into the frontier for A Million Ways to Die in the West. Does this sophomore effort firmly establish him as a talent to watch, or is it shaky enough to make Ted seem like a lucky shot? 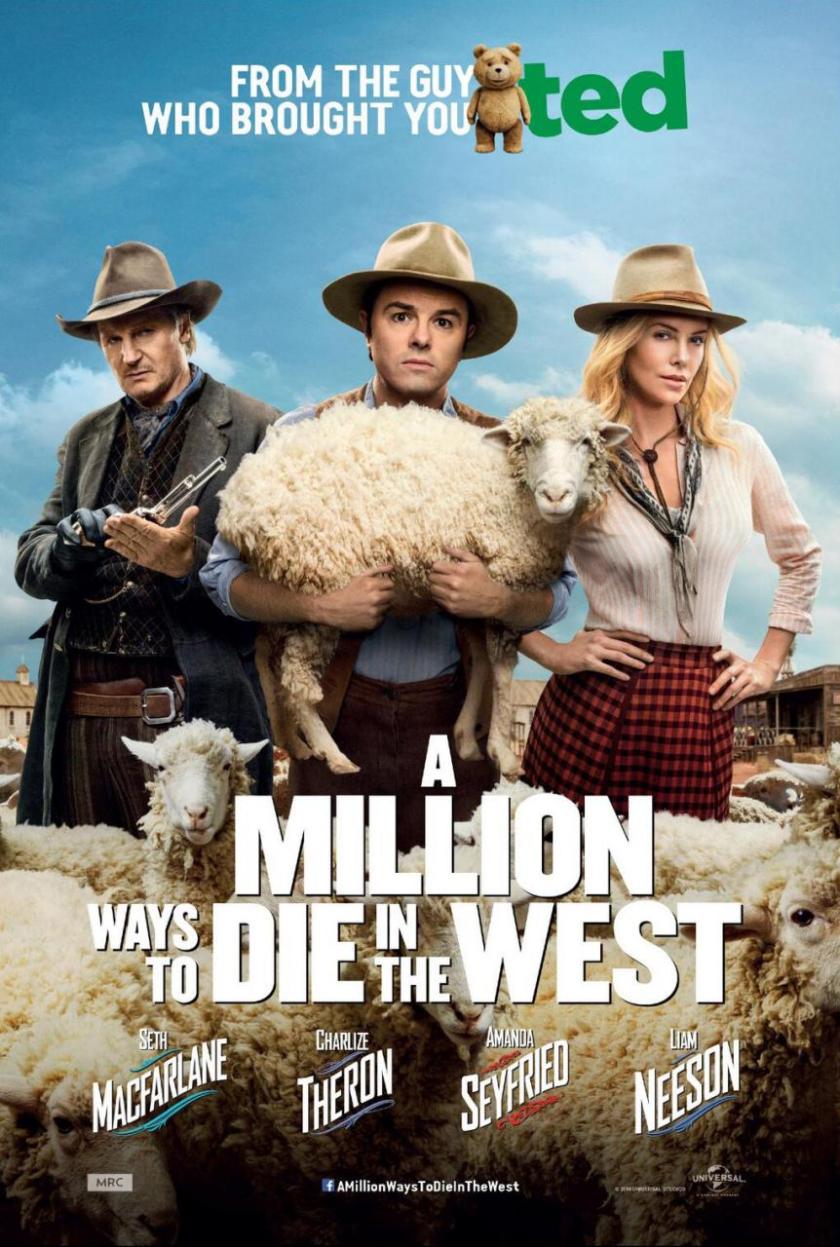 Plot wise, Million Ways is pretty standard fare; from the start, it’s obvious how everything is going to play out. What separates the film is, of course, MacFarlane’s unique brand of humour, but unfortunately the comedy doesn’t always work mainly due to the inconsistent tone of the film. Whilst Ted had a very similar feel to MacFarlane’s TV shows so his humour translated with little effort, Million Ways plays it a little more serious and cinematic. When you get right down to it, the film is a sweet little love story surrounded by western trappings, but most of the jokes don’t mesh with the visual and tonal aesthetic. I get that they’re being on-purposely anachronistic, but a lot of the gags feel out of place or, even worse, really juvenile and unpleasant (laxatives and sheep dick, anyone?). Sure, there are plenty of laughs to be had, but there were no huge or quotable knee-slappers and for every chuckle I got there was a groaner or two that killed the vibe. The film is also somewhat hampered by poor structuring. For example, Giovanni Ribisi and Sarah Silverman’s characters and their subplot plays heavy in the first act of the movie but then they disappear until near the end and their story is wrapped up way too quickly, whilst Liam Neeson similarly disappears after one early scene before showing up for the final act. I will say the film is decently paced and I was never bored, but Million Ways has far too many bumps in the road for it to be a consistently pleasant journey.

Seth MacFarlane is certainly a very talented person, and after hiding behind a CG bear in his last outing he takes centre stage here to…mixed results. MacFarlane is not a terrible actor and he remains a charming and likable screen presence, but my issue is less with the performance and more with the character MacFarlane has written for himself. Albert Stark often feels less like a rounded comedic character and more like a self-insert ‘woobie’ of a protagonist; Stark is constantly told what a kind, funny, stand-up guy he is whilst he constantly makes dry remarks and observations, and beyond gaining a little courage and hindsight he doesn’t change much by the end. MacFarlane ultimately lacks edge and comes off as way too simpering for his own good. Charlize Theron is a far more interesting character, managing to balance the serious and the comedic very deftly, but despite good chemistry with MacFarlane I never really got why she fell for this guy beyond “he’s nice”. Ribisi and Silverman’s subplot is one ripe for comedy, but the film constantly throws them under the bus and feel somewhat pointless by the end. Neil Patrick Harris’ snooty Foy got the most laughs out of me, though I felt he lacked a proper comeuppance by the end, whilst Amanda Seyfried feels like little else other than a plot device (somewhat intentionally, sure, but still bland). Liam Neeson plays the whole movie straight, which certainly works in his favour, but he lacks enough screen time to become a truly threatening presence. The film is also chock full of cameos; some of them are funny, but many of them feel inorganic and stop the movie out of nowhere with no relation to what is actually going on.

Million Ways certainly makes the effort to look like a classic Western, and on a technically level it certainly feels much more unique than most comedies. The music creates the perfect vibe, the costumes and production design feel authentic to the period, and even the cinematography evokes the cowboy tales of old (though I think shooting on film rather than digital would have helped add to rustic aesthetic they were going for).

A Million Ways to Die in the West certainly isn’t a complete miss, but it barely passes by. The plot is basic and sloppy, the characters aren’t the best defined, and the humour throws far too many misses. But despite all of the obvious flaws I did find myself caught up thanks to MacFarlane and Theron’s chemistry, and there were just enough genuine laughs to keep me entertained. Fans of MacFarlane will probably enjoy it enough, especially those with less discerning tastes, but it’s nothing you need to see in the theatre and it certainly comes nowhere near the quality of the man’s previous efforts.